The Marl family are going on a car camping trip soon. What's a guy to do with a two year old and a nine-month (notice my lack of blog posts lately?) old, the wife and a two-man tarptent?

Clearly a bigger shelter is in order

There are a bunch of option out there for mega-tents. REI has somewhat cheap (couple of nights in a hotel), beastly large tents line the Hobitat 4 or Hobitat 6.

The Hobitat is a monster-tent alright, with plenty of head-room for standing, which at first blush given out situation this seems useful. The little guy is still an infant – and too young to roll about on a matt on the floor, so he'll need to sleep in a pack-and-play or something, having a little space to walk around to rock him to sleep sounds tempting.

Then I look at the specs – a jaw-dropping 17 pounds for this tent. At this point I just can't bring myself to do it. Something in my core is so against buying a tent dedicated to car camping I'm not sure I do it enough to justify the extra clutter in our house – even packed up – it's huge: 10 x 10 x 27!

Some point in my future, I'm having fantasies that the boys will be old enough we can start backpacking again as a family and sure as chips I'm not going to lug a 17 pounder up any trail.

After some discussion Theresa and I decide a family backpacking tent is the right option – sure we'll be a little cramped when car-camping, and little baby Jack will be sleeping in a cardboard box, but hey – that just makes it more fun right? 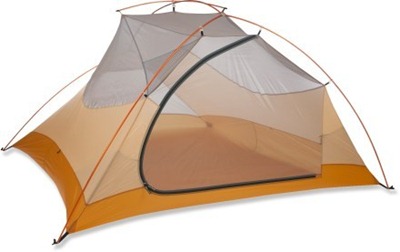 After poking around a little, I stumbled on the Big Agnes Fly Creek UL4. On sale at backcountrygear.com for $400.

It arrived yesterday and I set it up in the garden. I'm really impressed I haven't been that tuned in to Big Agnes as a brand, but they have a very solid product.

I'll report back after a little trail (or car camp) testing

19 thoughts on “An Ultralight 4-Person Tent?”