Google Earth release version 5.2 earlier this week. A wicked new feature is the ability to import GPS data and create a fly-by movie of your trip.

Check out this cool sample video for an idea of how it works:

Lots of talk about where to get our Epic hike in this year. Head to California and do the JMT? Re-do the West Coast Trail? Short run to Goat Rocks?

Reality is that it will probably be something modest this year. Theresa is pregnant again with Kid 2.0 and due in early August, so I'll have to squeeze this one in early. With such low snow cover, shouldn't be a problem. Lots of talk earlier this week with Tim and again this evening with Nigel on doing the PCT section between Snoqualmie and Stevens. It's about 70 miles with ~ 12k feet up and down. Tim is wanting to make it a 3-day long weekend (temporary insanity), Nigel is wanting a more leisurely 5-day trip.

If you're thinking of an epic trip this summer, what is on the top of your list? Shoot me a comment and let me know… 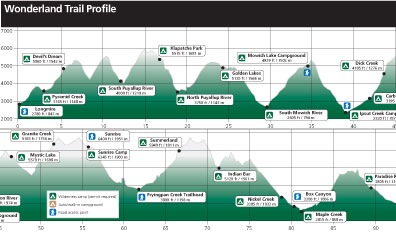 Hopefully this year will be make it onto the trail, unlike last years attempt.

If you haven't already, check out http://www.redtrails.com/. For Seattleites, the amount of trail data in the Seattle area is staggering.

Heaven help the old school Print Guidebook publishers with resources like this springing up.

While it currently appears to be a Geography Thesis experiment, the potential for a site like RedTrails is huge : combined with better trail descriptions, improved organization of data and user-rated trails it might just be a force to be reckoned with some day

Looks like the forecast for Scotland this weekend is 90mph winds and sub-zero temperatures.

Walking will be difficult, even at low level, with where exposed,
any mobility very difficult on higher areas. Severe wind chill. 

Best of luck Nige & Lynn! I hope those shiny new NeoAirs are up to the task, if not – take refuge in a pub somewhere. 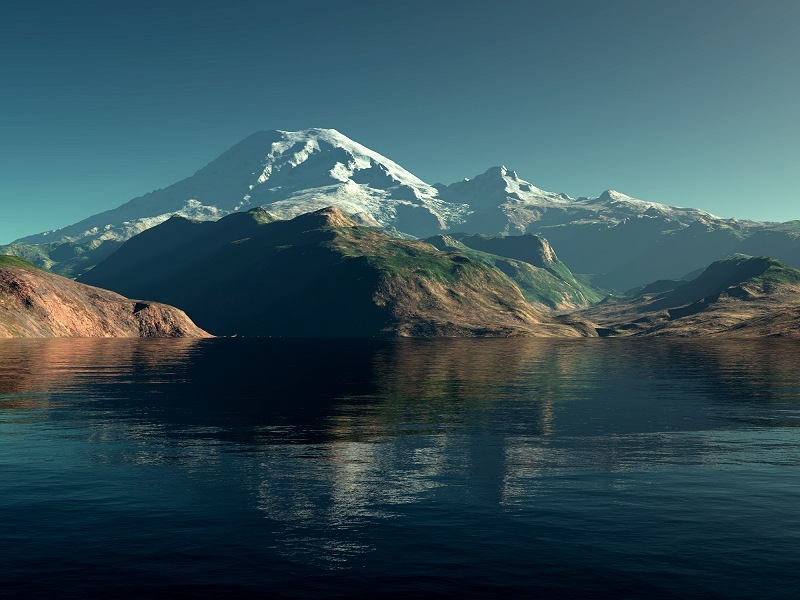 I received a letter today saying that our permit for the Wonderland Trail around Mt. Rainier has been approved. Last year we had to abandon our early season permit due to lingering snowpack. This year, we opted for a trip at the end August spanning over labor day weekend.

Our Camp sites are as follows

Oh and to top of a great start to April – REI is apparently receiving a shipment of Thermarest NEO Air sleeping pads this week. 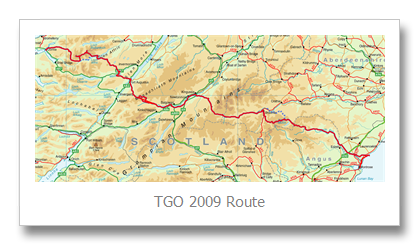 This has been an agonizing decision for me over the last week. Several conversations I have had with Theresa have made me re-assess my current plans to travel to Scotland and hike the TGO in May. There are many many reasons I really want to do the TGO (not least of which, it's on my Top-5 list), and a handful that give me pause for thought; but it boils down to two major factors:

So with much sadness, I am withdrawing from the TGO. I am thankful for the opportunity to be accepted onto it this year, and hope that Nigel and Lynn at least (Tim will likely withdraw also given this news) will see their way across Scotland. I very much hope and wish I hike the TGO some day when the planets align to make the circumstances right.

I shall turn my attention back to my top-5 long distance list and pick a long distance hike closer to home this summer – perhaps this is the year for the Wonderland Trail?

What point is there in hiking the TGO 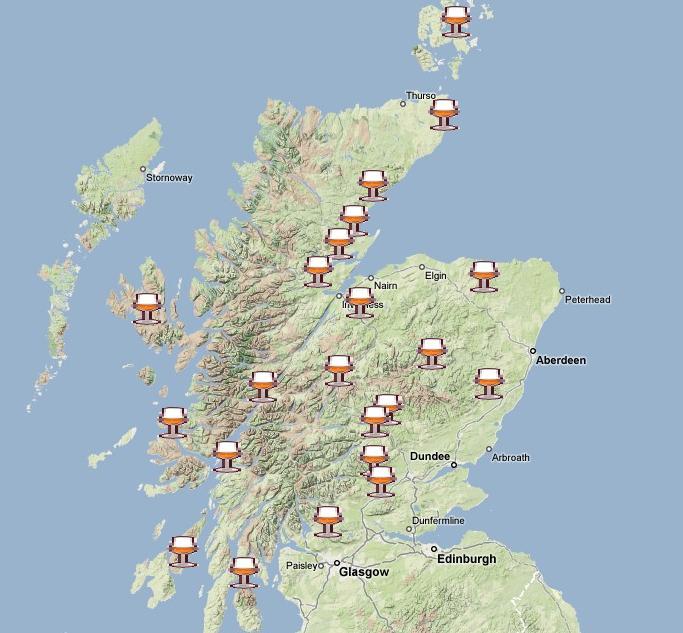 without a map showing the location of some of the worlds finest distilleries?

To that end – Nigel conjured up this map for all to enjoy.

I started a Custom Google Map of the TGO challenge. I'll put points of interest and things on it, as I find them from reading various things online.

Currently it has start points, end points and some restaurants from Andy. 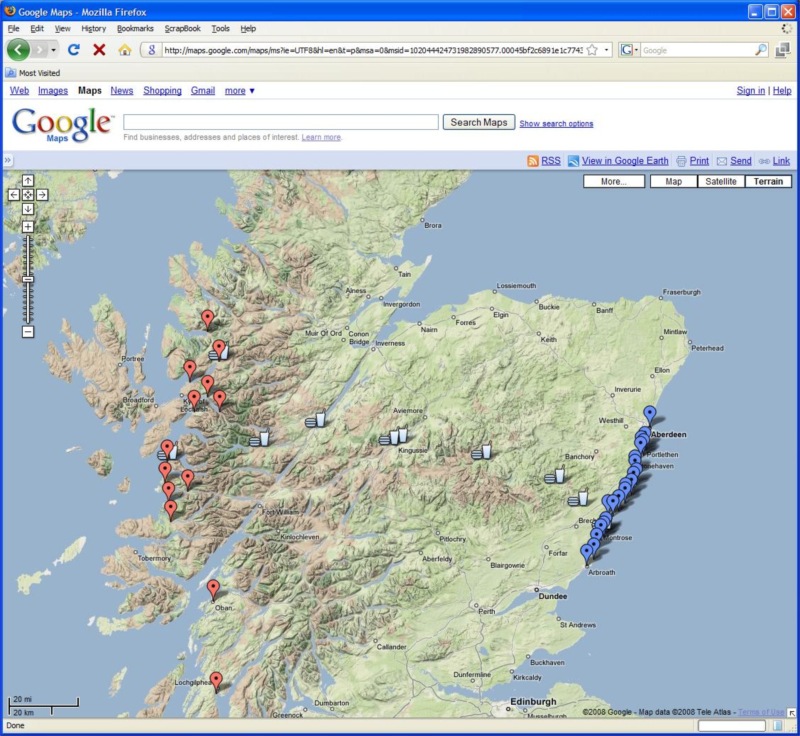 I received a letter in the mail today indicating that we have been accepted onto the 30th TGO Challenge taking place in May 2009.

This year there were 509 applications and only 360 spaces available. We were lucky enough to get selected in the draw.

Planning our trip will be fun and challenging. Nigel found a good Podcast offering some planning trips by Chris Townsend:

The Great Outdoor  challenge is a ~200 mile hike from the west coast to the east coast of Scotland.

The TGO is on my 5 long distance trip I really want to do  list, so we submitted forms today. Hopefully we will get selected.

I might be somewhat ambitious given I have a newborn at home – but Theresa is game for hanging out with my parents in the UK with baby Chester, while Nigel, Lynn, Tim and I do the hike.

Barring some freak 10-foot snow-melting heat wave in the next week, we've officially selected a backup hike to replace our Wonderland trip. 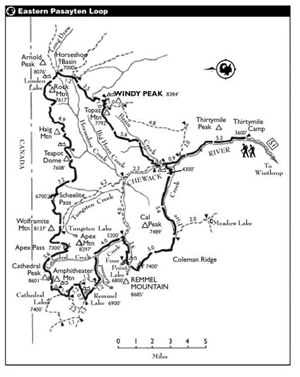 The Eastern Pasayten Loop is it. It's a 65 mile loop that covers what appears to be some spectacular terrain.

Nigel called the local ranger station to get some trail updates. Here is what we learned:

– Start of trail #510 still has trees down and standing water in the parking area. They plan on opening the trail head by the end of this week .

– Fire Creek burned out in 2003 and is still a big mess – she said to avoid it since it has not been maintained since.   South of this is supposedly ok (especially the area around Four Point Lake)

A web page of snow conditions for each of the trails located here. Just last week it sounded like heavy snow still – today they are listed as snow free for the trails on Eastern Pasayten but heavy snow at Larch Pass still.

Map and trail guides courtesy of Backpacking Washington, available from Amazon for $13.46.

We're searching for a replacement hike for our Wonderland Trail trip. So far we have narrowed the search down to 3 candidates: 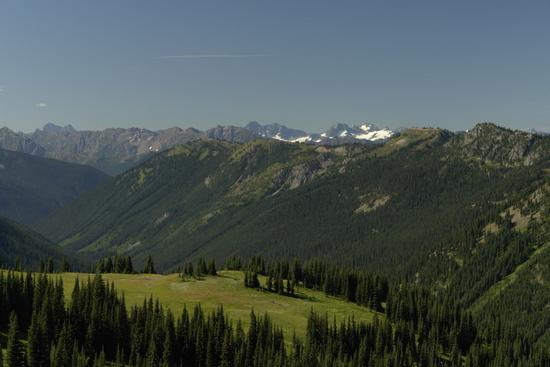 1 is challenged for us logistically at such short notice. 2 sounds fun – but too similar to our WCT experience last year and probably not "epic" enough. 🙂

3 is an interesting candidate. Its way out in the wilderness, with Grizzlies and Gray Wolves, and best of all – mostly snow free (so we believe). Sounds entertaining…

Time to study the maps and see if we can make a loop out of it. With 6-7 hrs drive from Seattle, travel time will whittle our trail time down a little. 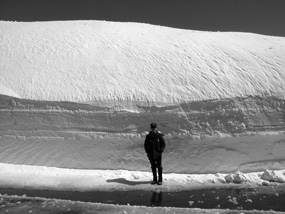 We are almost three weeks away from the start of our Wonderland permit.

Things aren't looking good for us. The trail is still buried under the heavy snows from this season.

All of our designated camp sites have 100% snow cover still.

I'm holding off on calling the ranger station for fear of disappointment hearing him laugh at me on the other end of the phone, when I ask how likely will it be hikeable by July 12th.

Trail conditions can be found here.

We're starting to evaluate alternatives. Hike the Olympic coast? Hop a plane to California and hike the John Muir trail?

Thanks to HikingDrews's recent comment, I discovered eyehike.com. It's a treasure trove of resources – especially for the Wonderland Trail.

I haven't spent as much time as I would like on the site yet, but here are some of the things I've found so far:

Check it out – handy site.

Longmire Ranger station called today to inform us that they were able to make one of our backup itineraries work. Score! We're going to Wonderland!

I'm really excited about it already.

Tips from the ranger:

Trail permitting begins on March 15th (Tomorrow) for the Wonderland Trail. We have an application ready to go in the mail. 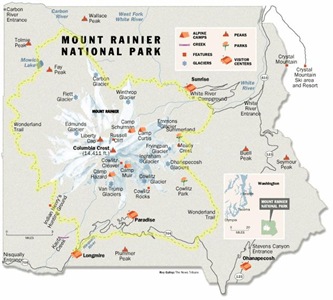 The Wonderland Trail is an epic 94 mi hike around Mt. Rainier. Aside from the distance, there's quite a lot of elevation gain.

We applied to take on the trail in mid July. Hopefully, we have a warm spring and a lot of the snow melts.

The adventurers on this trip will be myself, Bill & Tim (from our WCT Trip) and Nigel. Nigel is taking Theresa's spot as she is pregnant and due in August, so won't be able to make it.

We going to take a somewhat relaxed pace and do the trail over nine days. There are two points at which we can cache food for re-supply, so with only having to carry three days of food on each leg, we should be able to go pretty darn light.

The "Enchantments" are a breath-taking, endless sequence of lakes nr. Leavenworth, WA.

The area has a very strict permitting policy and only a few lucky people get a permit for overnight stays each year. 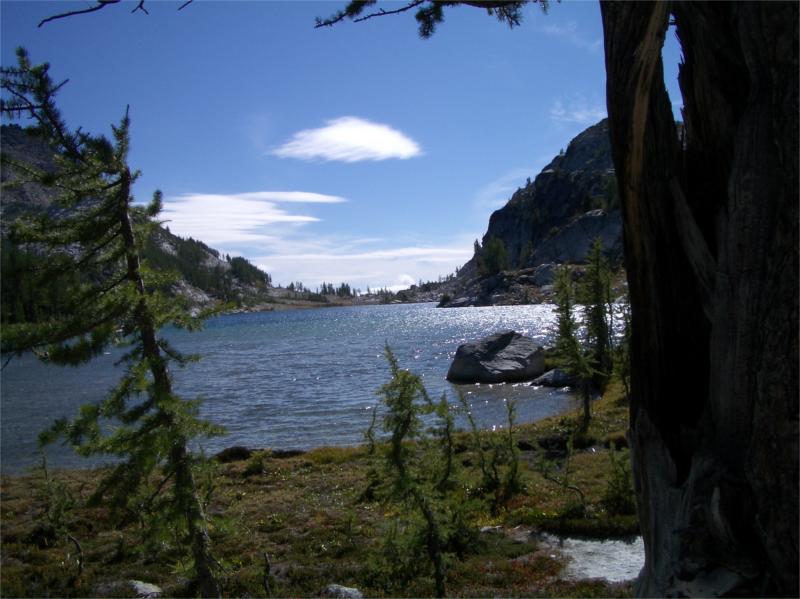 This picture was taken on our last trip there in 2004. If you are running Windows Vista – it's pretty much taken from the same spot the default Vista desktop background is taken from.

If you've ever wanted to hike the enchantments and are thinking this would be the year to do it – the applications are due soon.

You cannot mail your application prior to Feb 21st (postmark) – but it has to be there before March 1st. Then at random, they will select applicants for a permit. There are several strategies around filling out the form to improve your chances.

Some good tips and more information can be found here:

Happy new year! It's 2008, and I'm noodling on some backpacking goals over the next few years. I haven't done much long-distance backpacking. Most of my long ones are in the 30-50 mile range. I'd like to expand my horizons (and mileage) a little…

Here are some hikes that get me drooling:

1. The Wonderland Trail
This is in my own back yard, so it's a must. A 93 mile jaunt around Mt. Rainier. I think this might be my big trip next summer.

2. The John Muir Trail
This is supposedly one of the most spectacular sections of the PCT, that goes though Yosemite Valley in California. Its 211 miles in length.

3. The TGO Challenge
I already mentioned this one. 200 miles from west->east coast of Scotland.

4. The East Coast Trail
The antithesis of the West Coast Trail. This trail is still under development, but offers 335 miles of very pretty coastal hiking.

5. The entire Pacific Crest Trail
And finally… the mother of all challenges. This trail runs from Canada to Mexico down the west coast of the US. At 2,650 miles it would be a serious commitment – but I would love to do the entire PCT (continuous) some time in the next 5 years. It seems like one of these life-changing trails.