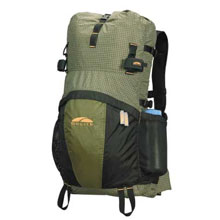 It's not the lightest pack around, but its very close and has some extra features that I feel are worth the weight.

First, a little history… the origin of ultralight packs started with good old Ray Jardine. In his book, Beyond Backpacking he describes a light weight pack system. How to pack it to be stable and how to sew your own! Fortunatley, some commercial guys got involved and decided to pre-build them for consumers. Golite are one of the mainstream makers of ultralight packs. Six Moon Designs have some interesting ones also.

Golite used to make a pack called the Breeze that was a replica of the one in Rays Book. I have this pack also, and it's amazing light at only 14 oz. However, I was unable to get one for Theresa as they are no longer made (Ray and Golite had a "falling out"), and so settled for a Jam.

On our first outing together with both the Jam and the Breeze I was a little envious of some of the features. Most notably:

An off-the-shelf Jam weighs in at 22 oz, which is still incredibly light. I have modified my size medium by removing the inner water pouch, removing the backpad and reducing unecessary straps – it's now down to 19oz. The backpad I don't miss as my thermarest doubles as this quite well, and the pouch I found to be more awkward than useful – the slits are the most valuable part.

Available from Amazon for $79.