I know what I'll be asking Santa for this Christmas… except it doesn't ship until May 2008. 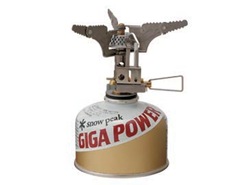 Snow Peaks website lists this stove as weighing in at 3.3 oz – which isn't that great. However, I'm hoping it's a typo. Earlier this year Backpacking Light saw this stove at a trade show and reported it as weighing 2.15 oz.