Last week, Tim and I took a spontaneous mid-week 3-day backpacking trip in the Alpine Lakes area of the Cascades. 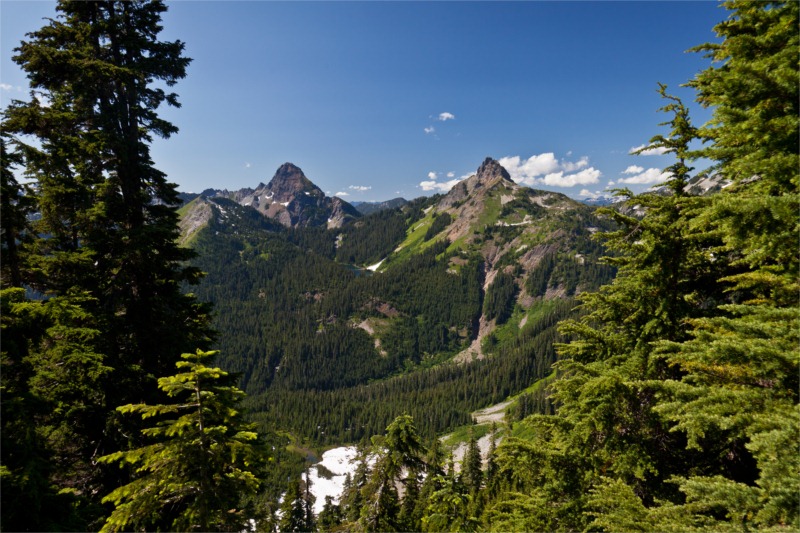 Due to an unusually high snowpack this year, we struggled to find the perfect spot for our 3-days. Many of the epic trips we wanted to do were still suffering from high-elevation snows which would mean we couldn't do the mileage we wanted in our allotted time. An excellent compromise, very close to home – was Spectacle Lake and beyond.

Permit Info: An overnight permit is required but can easily be obtained at the trail-head. This is a crowded area on weekends, so go mid-week or expect to fight for camp spots.

Getting There: From Seattle, drive I90E to Cle Elum, then drive Hwy 903 for 18 miles. Turn left on Forest Road 46, crossing the river and after 3 miles turn right onto a gravel road – following signs for Cooper Lake. Pete Lake trail head is here, people parking on the left, horse parking on the right. 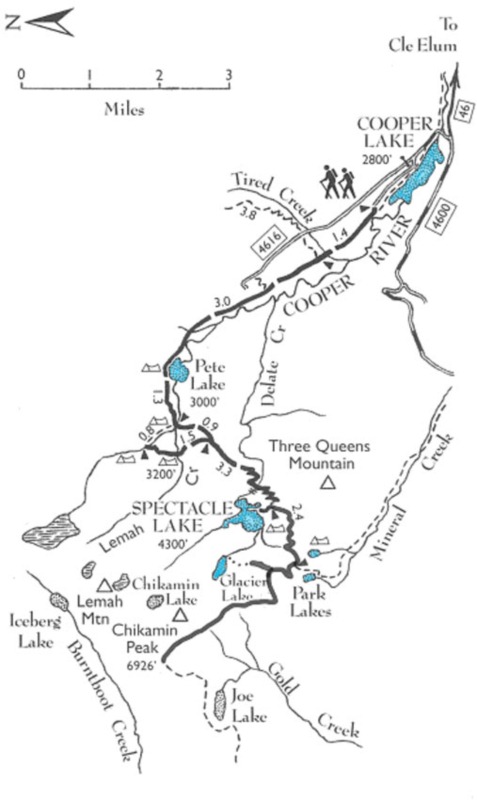 Photo Credits: The crappy ones are from my iphone, the awesome ones are Tim's.

Checking the scale before we left, my pack was coming in at just under 19lbs with water and 3-days of food. Tim was running a little heavier as he was packing in his Canon 5D for some spectacular shots.

We left Seattle at a nice leisurely 9:30 am and arrived at the Cle Elum Ranger Station around 11. We wanted to check-in on trail conditions and also needed to buy another NW Forest Pass (after leaving mine on the kitchen counter!). The Ranger told us that he pretty much just checks the WTA website these days for trail conditions reported by hikers, as they don't have many field-rangers anymore to keep up on conditions.

Another 30 minutes or so and we were at the Pete Lake trail head, close to the shore of Cooper Lake. It was a Wednesday, and so there weren't many cars in the parking lot, so the mozzies smelled us a mile away. As soon as we got out, a couple came right up to introduce themselves

We read some recent reports that mosquitoes were very bad in this area, so defended against them with Permethrin treatment on our clothing.

The hike starts out with a very easy 4 mi hike in to Pete Lake. The trail hugs Cooper River, which reveals itself at various spots along the way – the river had a very pretty copper-blue tone to the riverbed that made you just want to run down the bank and jump right in. 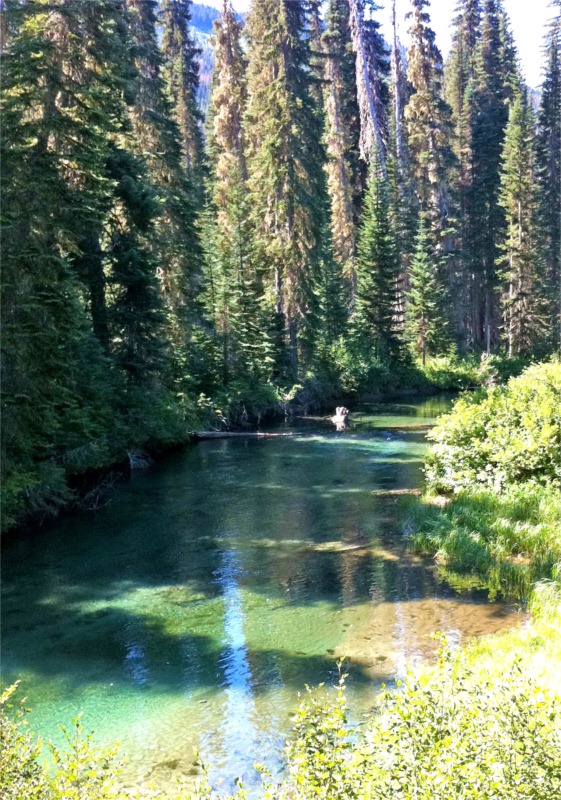 Other than a few junction off-spurs on the way, a couple on horseback and a few hikers coming out, it was a fairly uneventful trip to Pete Lake.

We ate lunch on the shore of Pete Lake – I munched down my usual Day One , PB&J and fresh apple with a little beef jerky. Delicious.

A sign at the trailhead warned us that the PCT bridge had washed out and the only option was to ford the creek. Some WTA reports suggested there was a tree down near the bridge that was crossable, but we decided to just do the ford anyway.

Rather than just jump right in, we scouted the bank for a drier option. There appeared to be some cairns marking the way towards a large downed tree. Unfortunately the tree turned out to be inaccessible and the cairns stopped short to another bank, they probably marked an earlier season crossing when the main crossing was too fierce. Foolishly we decided to take the freshly discovered alternative crossing. 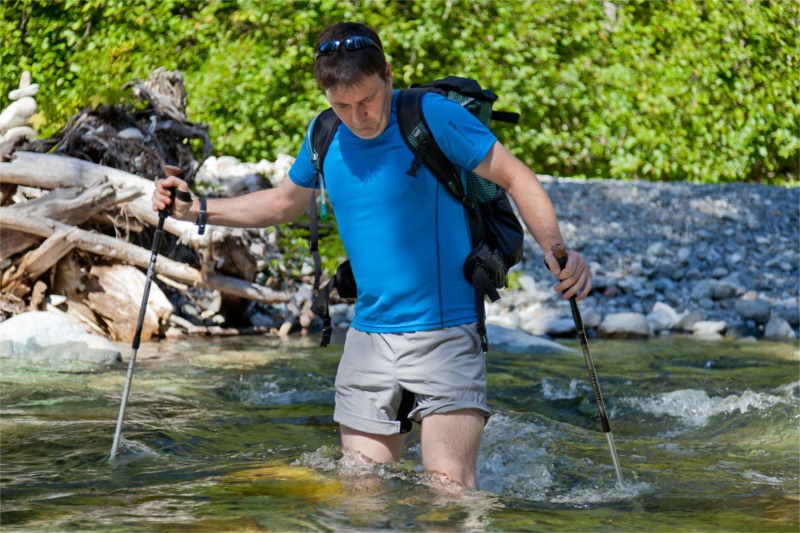 We pulled out our socks and insoles (to allow shoes to dry faster on other side) and waded in with our shoes on. The stream was over knee deep in spots, and flowing fast, but fairly easy to cross with poles. However, when we got to the other bank – we had to take a pretty extensive bushwhack through nasty thorny bushes before we were back at the trail. Added an unexpected 20 minutes to our crossing.

On the other side, I re-applied Hydropel to my feet to prevent blisters and put the dry socks on and insoles back in, within ten minutes of hiking the shoes were dried out again. This is a huge advantage for non-goretex light mesh style trail runners – they dry fast.

After the crossing the trail weaves through a burned out section of forest and them began climbing up to Spectacle Lake. 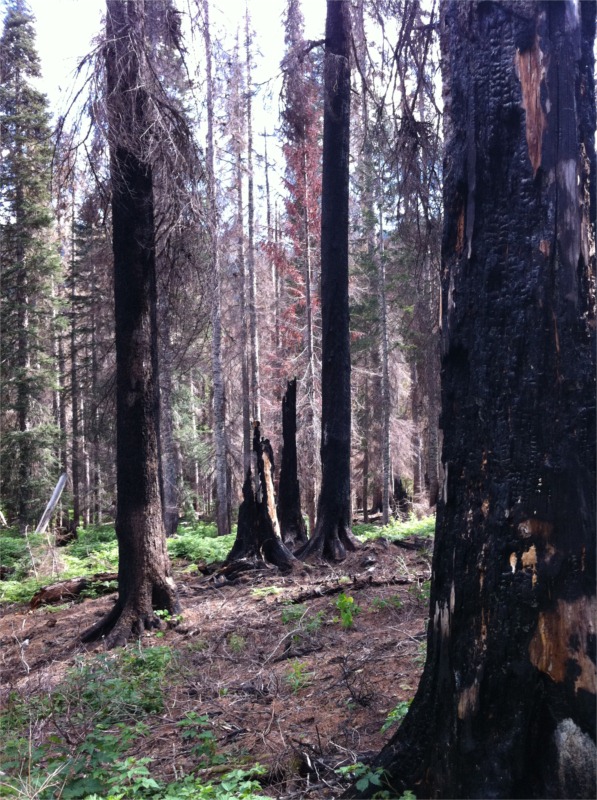 As we hiked though this section Tim has a Zen moment: he noticed that the hard-worn trail we were on had very aggressive growth at the sides. The trail (or wound), allowed there to be more light which allowed for more intense growth to heal itself.

The trees quickly regained their foliage and the trail opened up to pretty meadow views and crossed a foot bridge by a large waterfall. 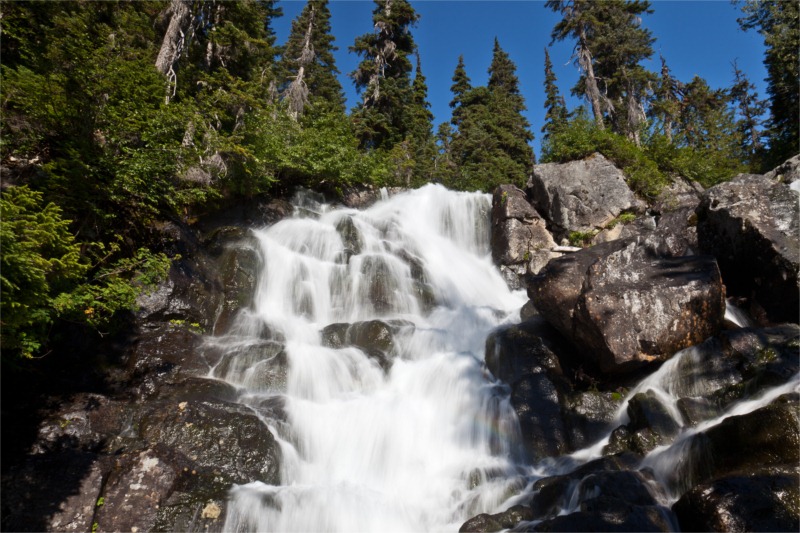 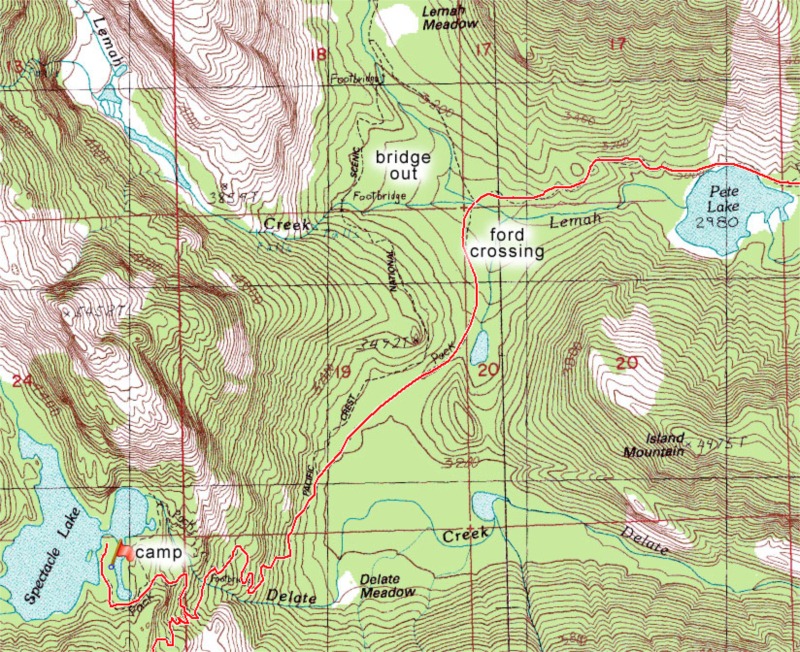 On our way up to the Lake we ran into a Spanish PCT thru-hiker – he was almost running down the hill. He noticed my ULA pack and stopped to chat. He was also carrying a ULA and was curious what pack Tim had (GoLite Jam). Sixty seconds later and he was on his way, cruising rapidly downhill clocking the miles before bedtime.

The trail finally spurred off towards Spectacle. As you can see in the picture below the lake is almost divided by a long peninsular. When you get to a fork in the trail go left and around the lake to get onto the peninsula; these appear to be the best camping spots. We arrived around 4pm. 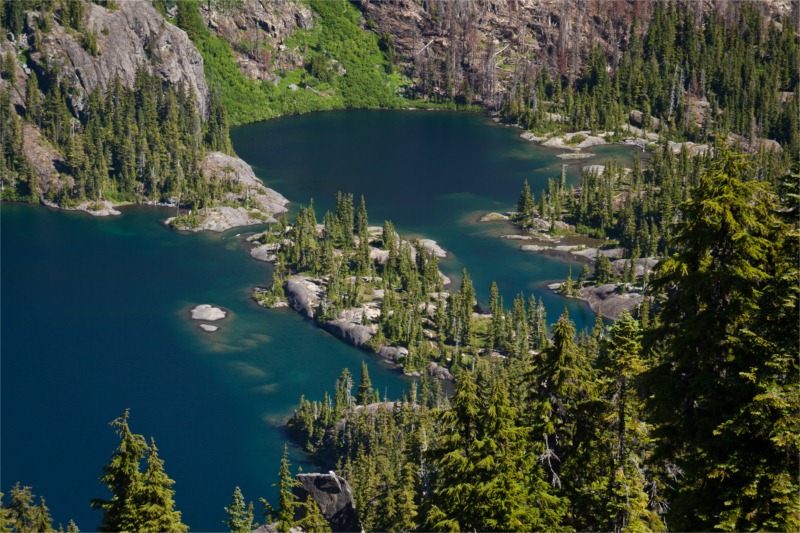 We setup the tent and explored the area for a while. The temperature was pleasant and the bugs were minimal. 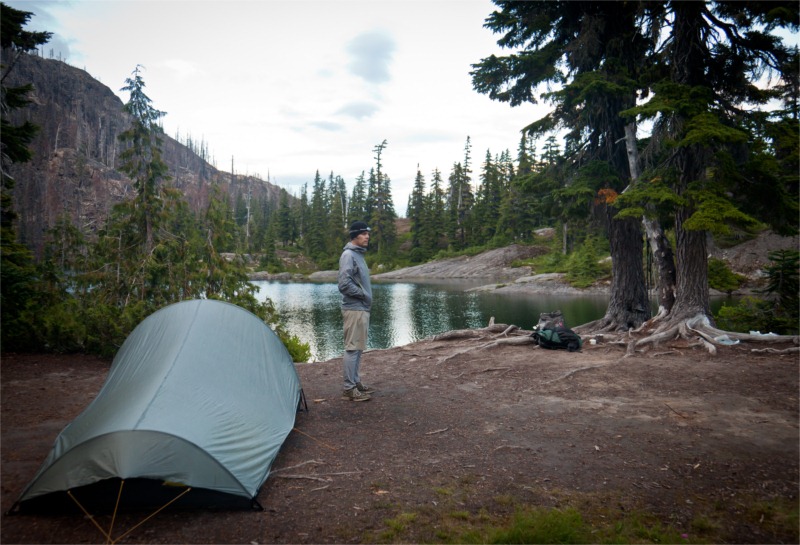 Not that hungry, we eventually forced ourselves to cook our freeze dried goop and chow down a meal. 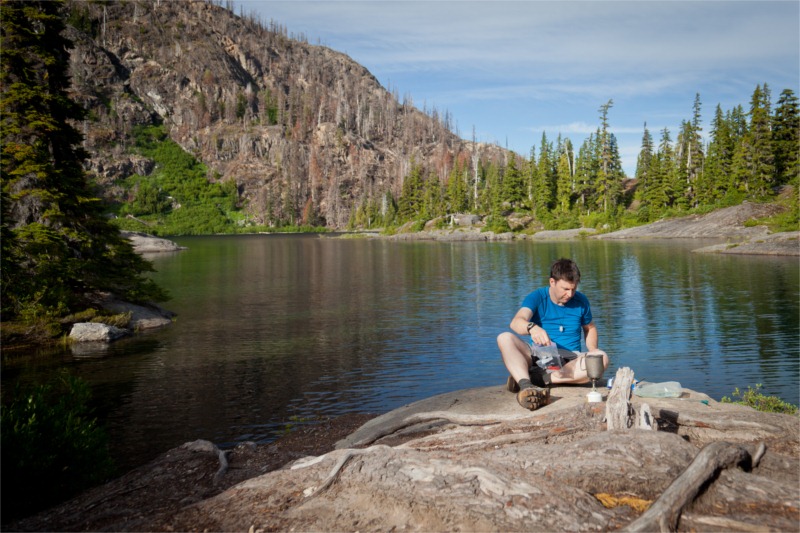 Hung the food and tucked up in bed by 8pm ready for a big day up to Glacier and Chickamin Lakes tomorrow. 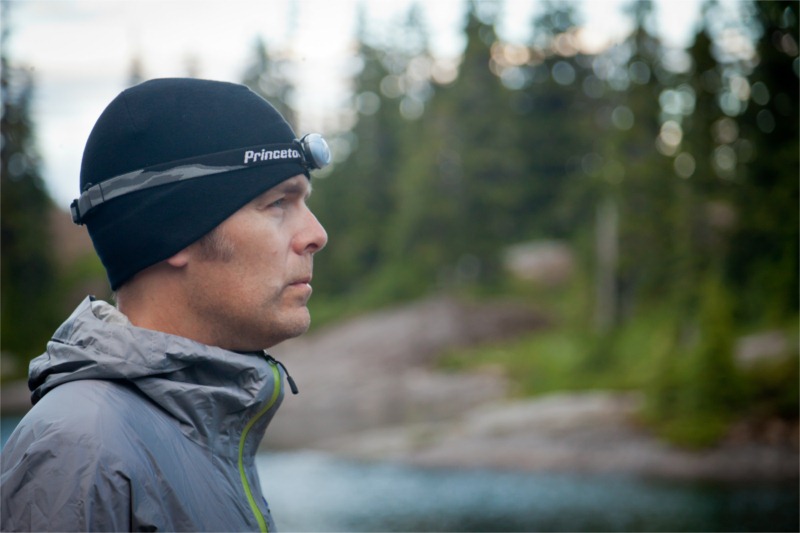