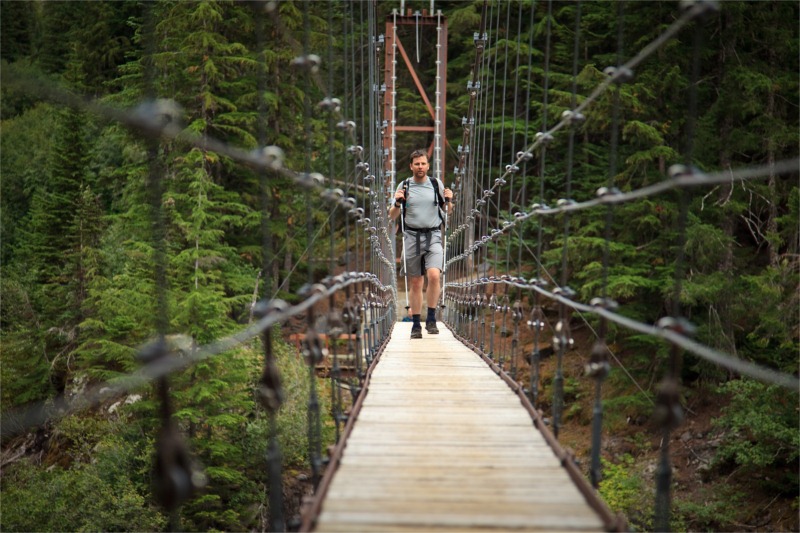 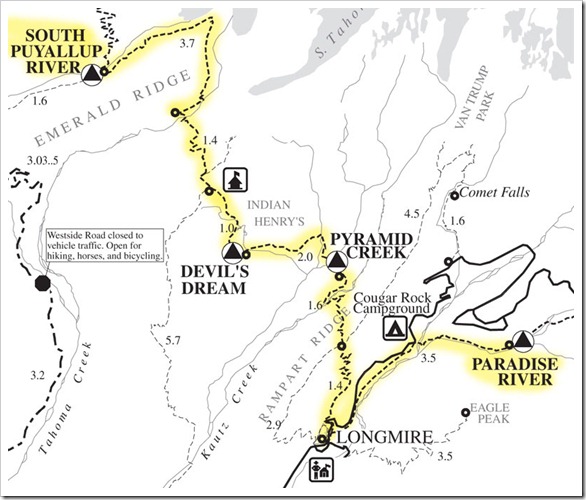 A Stir in Camp

The morning started average enough. Wake up, go for a pee, get the stove going start to make breakfast etc etc. That is, until Dave decide that it would be a brilliant idea to accidentally knock his cup over, next to the wasp nest entrance – and watched it tumble into the opening.

Almost every wasp in the nest decided to come for a little visit to see what the commotion was. We backed away and kept a little distance. After five minutes or so, they decided that Daves cup wasn’t a big threat and slowly started flying back into the nest. Whew.

Today our plan was to make it to Devils Dream – and there was a big climbing coming out of Longmire. We got on the trail relatively early and Tim took charge of the situation – setting a ferocious pace for the 3 1/2 miles to Longmire. We passed by Cougar Rock Campground and the trail paralleled the road for quite some time. After being up high the last few days – I found this very distracting – hearing cars ripping by – took away from our ˜wilderness’ experience. 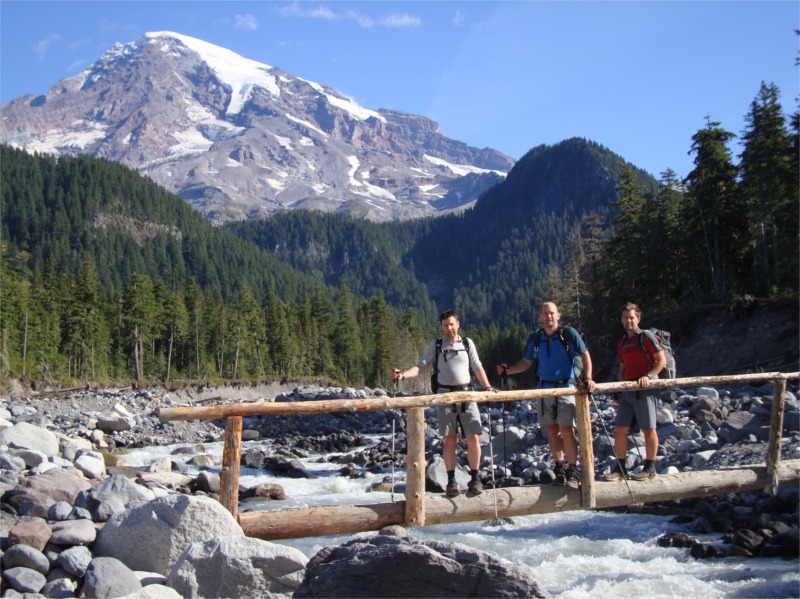 On the last hill down to Longmire there is an old wooden pipe wrapped with metal bands. I assume this was used to feed water into Longmire at some point. 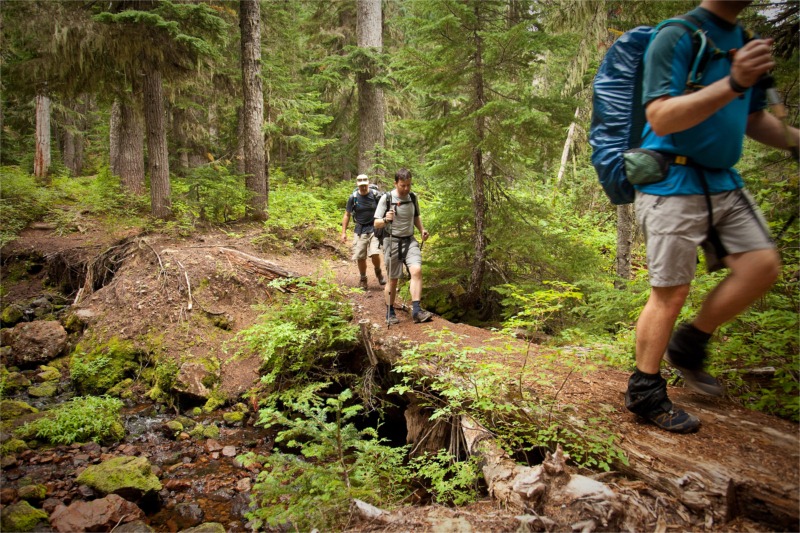 For many Longmire is a great rest-stop – a point of resupply and a home cooked meal. We were just passing through so wanted a weather report and to dump some trash (mostly those beer bottles from last night). As we re-stocked on provisions yesterday we didn’t even plan for lunch.

Coming off the trail in Longmire – it was easy to locate the ranger cabin – so we stopped in to get a weather update and let them know the toilets were overflowing at Maple Creek. 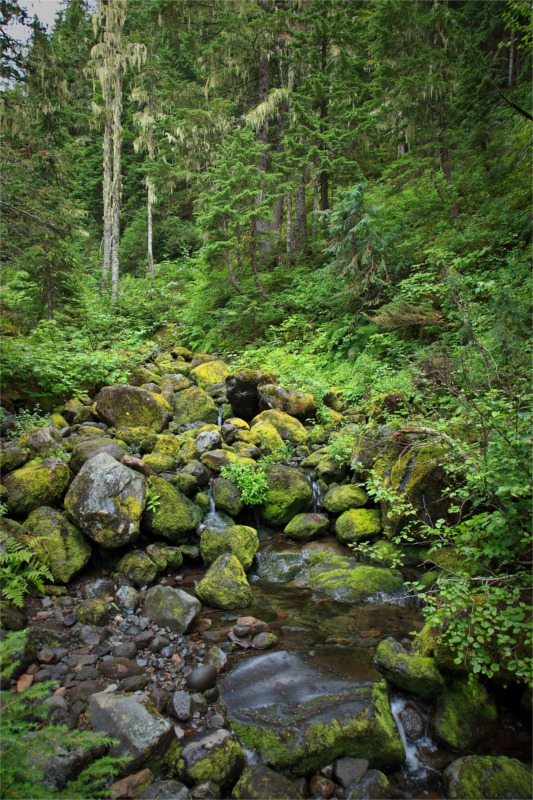 A Change of Plans

The weather update wasn’t good. NOAA had issued a severe weather warning for the mountain. A cold front was moving in and heavy rains and snow were forecast. Daytime temperatures in even in lower elevations were forecast in the low 40s. Hard to imagine given how nice it was outside this morning.

We weighed up our options – we weren’t really prepared for any extensive snow travel and the idea of spending more days on the trail in socked in rain didn’t sound that inviting. However, we wanted to complete the loop. As our pace had been so relaxed at this point – we decided to see if we could change camps, add some more mileage each day and get out a day or two early. 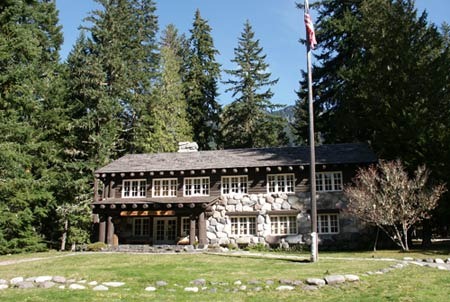 The original plan was:

After evaluating several options, we settled on the following:

A big push to Puyallup today before the skies open and then a long wet hike out tomorrow. Sounds doable if not down right fun.

The permits were changed, and the plans were locked. We went off to the store to fill up our water bladders. Shaving two days off our plans meant we had an abundance of food – so we dumped the excess at Longmire to save weight.

Back on the trail we started the long climb up to Devils Dream. The five mile climb whizzed by and rain started to fall as we reached the campsite. We stopped under the shelter of our umbrellas and trees and had lunch and piping hot builders tea to boost morale again. 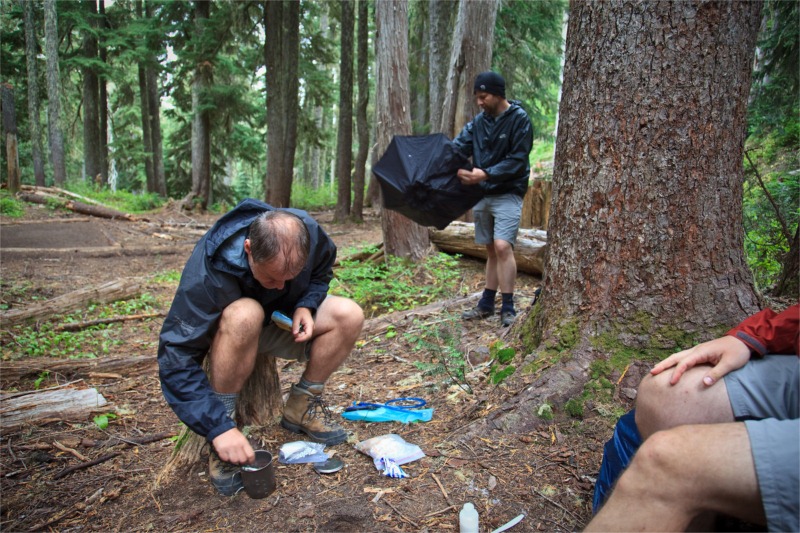 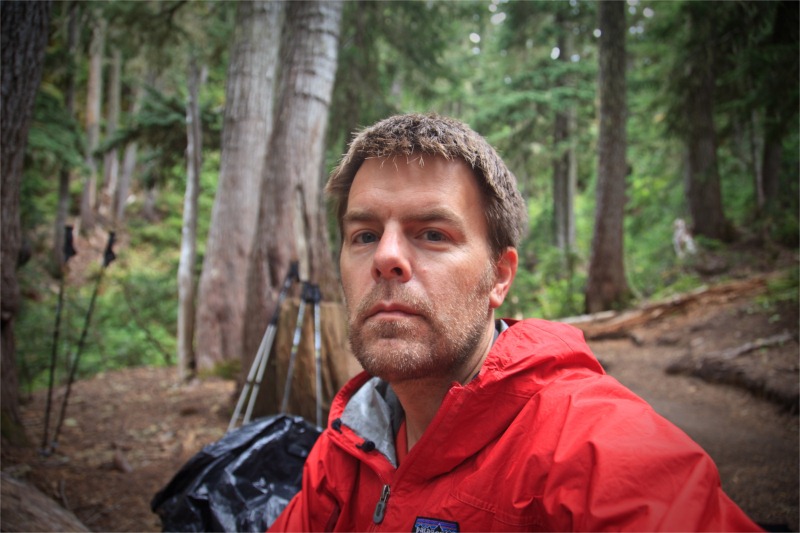 Devils Dream was a nice big camp with a deluxe toilet. However it was dry and the nearest water was quite far back, it also felt like it would be a bug-haven earlier in the season. 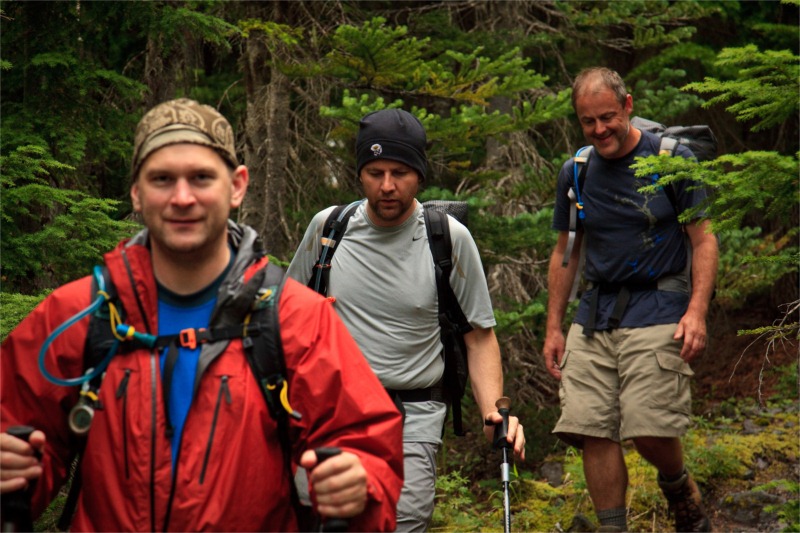 Beyond Devils dream, we climbed up into some stunning meadow areas. We hiked past Indian Henry’s Cabin and the surrounding hunting grounds . I’d seen pictures of this area before and it looked stunning – so it was an section of the trip I was really looking forward to. Not today. It was drizzly, the clouds were low and gray and the flowers were all gone. Not the picturesque meadow with crystal blue skies on the pics I saw 🙂 We swore that we would all come back and if not do the whole loop again – at least section-hike this area on a stellar day. 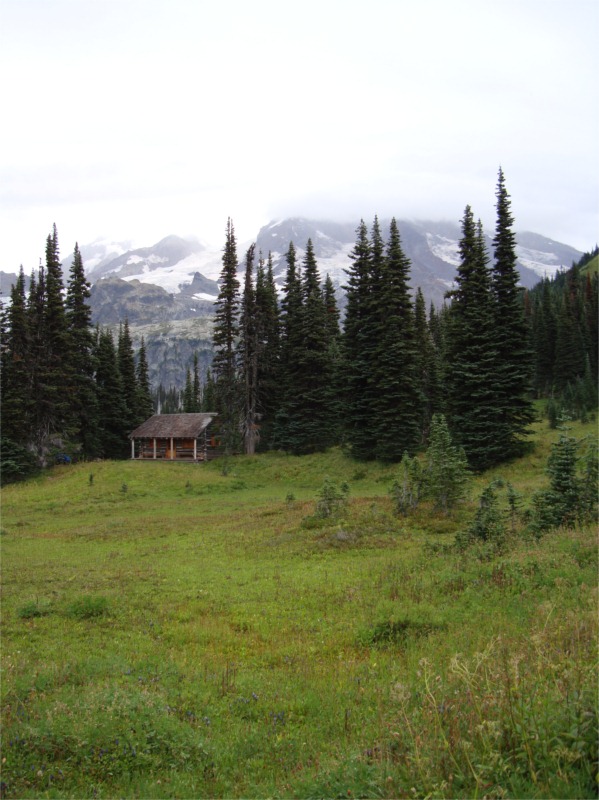 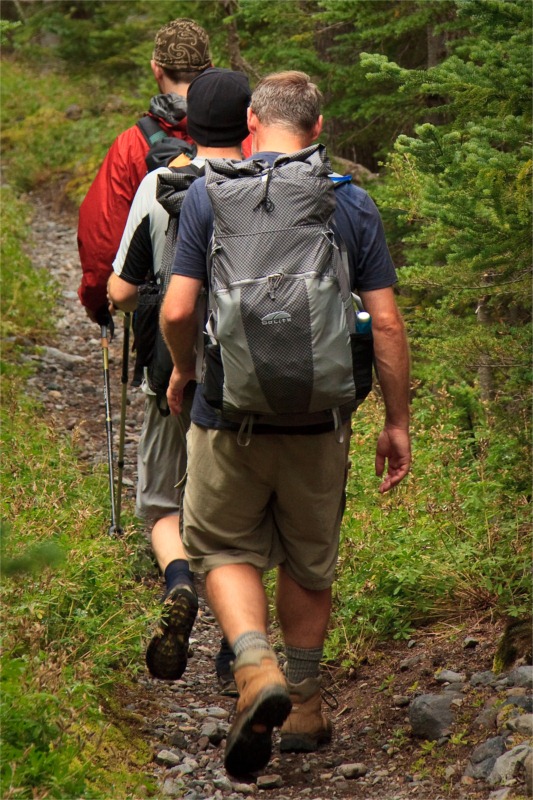 Anything that lacked in views was certainly compensated by taste of the amazing blueberries. Dave and I feasted again and filled up a little bag for breakfast.

After Indian Henry’s, the trail dropped down and took us over the mighty Tahoma Creek via suspension bridge. The flood damage was extensive below. If this was a creek  – I’d hate to see a river 😉 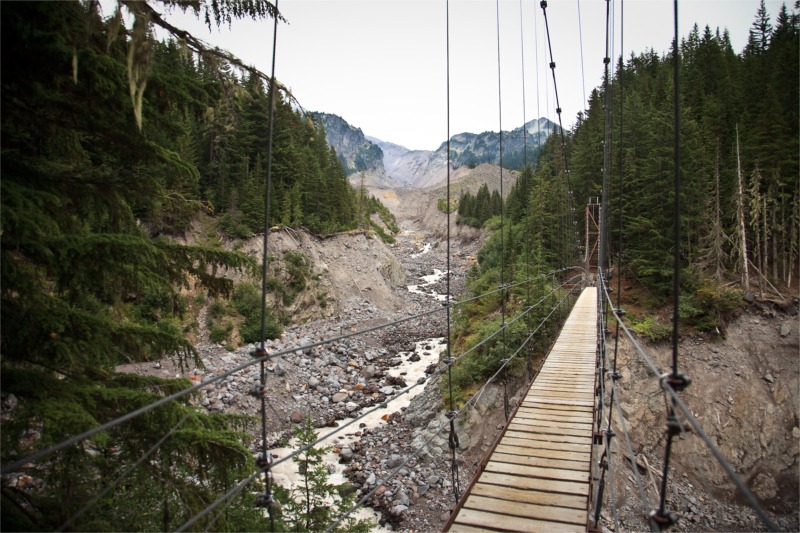 After the crossing, the trail climbed up a section of glacial moraine and into a radically different world. The forest was gone and the landscape changed into a surreal lunar-like volcanic kingdom. The area was breathtaking and makes one feel small and inconsequential. It felt as if giant back-hoes had been here and tore up the entire side of the mountain – the vegetation was so sparse. Accompanied with a nice break in the weather – it made for a pleasant place to linger. 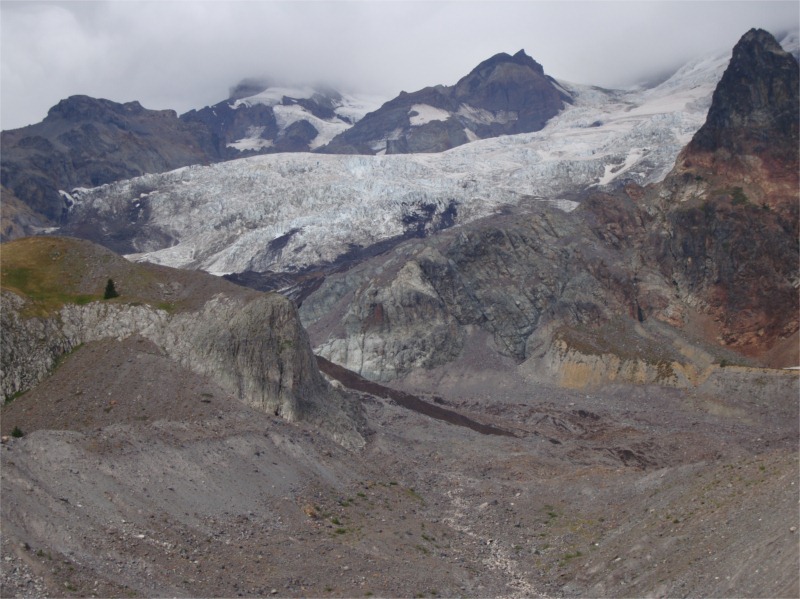 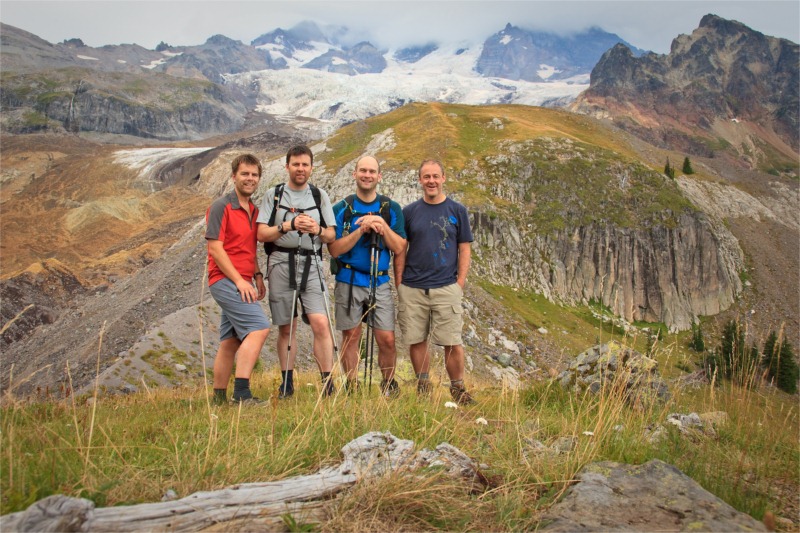 We took a side trip  to a nearby hill to get a better view – from the top we could see all the way to Mt. Hood. Here we stopped for a while to load up on snacks and water. Dave broke out the map and tried to figure out how long before we hit camp. It was late in the day – almost 6pm by now. 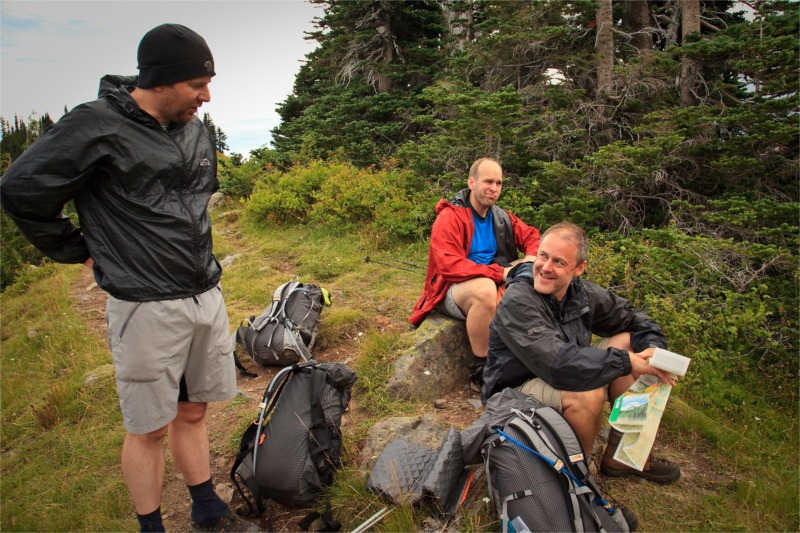 In the distance on the other side the ridge we saw a cluster of white dots. They looked like they were moving – a quick zoom with Tims lens and we confirmed a herd of eight mountain goats. 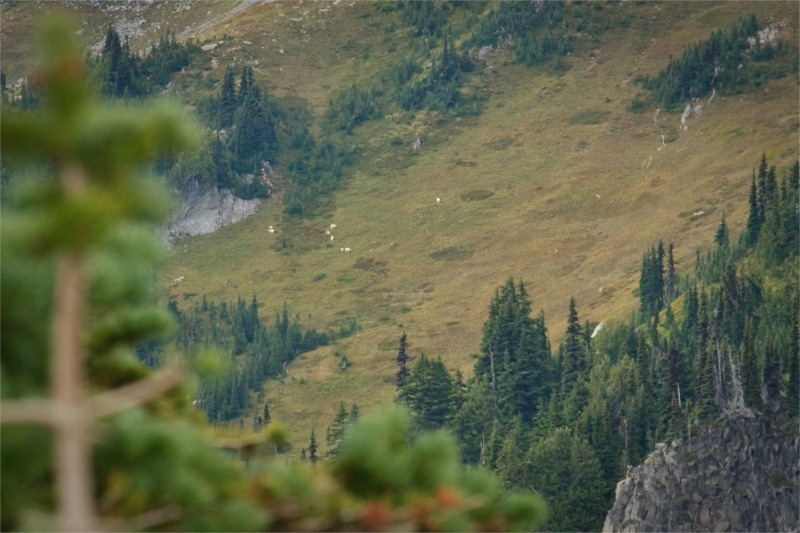 Moving on, we made a long and hasty decent back into forest. The terrain was treacherous here – and a fall would be fatal. We sure were glad not to be hiking this section in any kind of snow.

We arrived at South Puyallup around 6:30pm. We pitched out tents in the only remaining camp – and went to scout out water. Water access was minimal – and we had to hike back up the trail to get some. I scrambled down to the river via the group site and washed my feet in the cloudy glacial run-off. 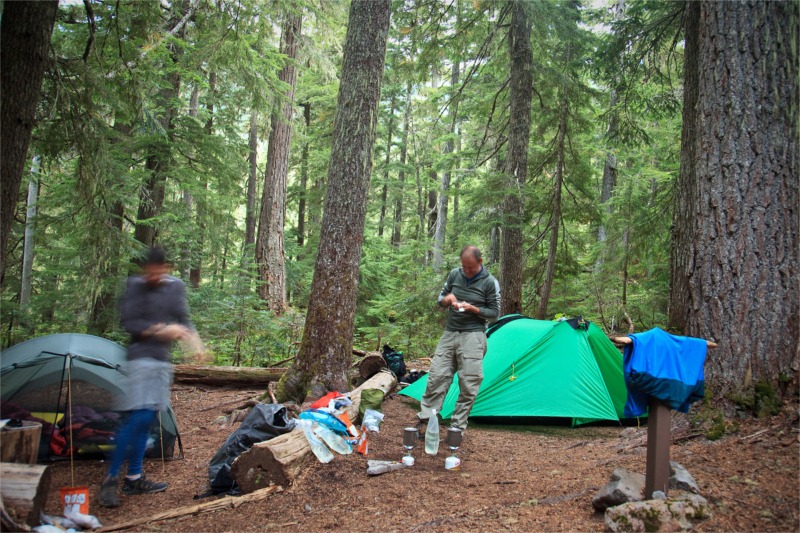 Back at camp – Nigel and Tim had the stoves going, and out came the Chicken Tikka once more. This time Tim and I got to try it – with lots of left over mountain bread to soak it down. 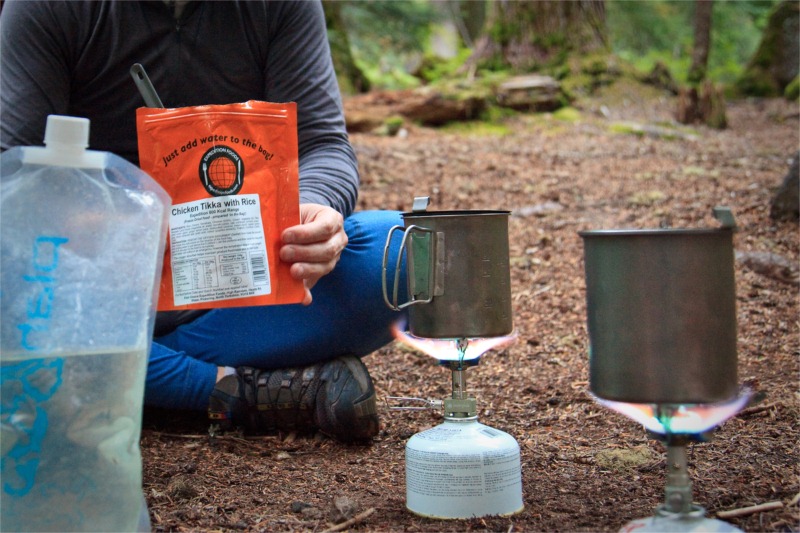 No soon had we cleaned up, hung out food the rains started to fall. All four of us huddled up inside Nigels Lunar Duo to play a game of spades and tuck in to the generous re-supply of whiskey that Dave picked up yesterday.

Huge props to Nigels’ Lunar Duo – amazing that there was enough space for four people to sit up comfortably. I’ll never be able to do that in the Cloudburst tarp tent