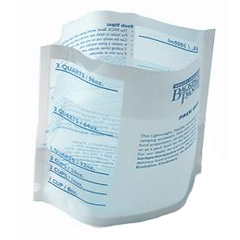 One modification I just made, was to replace our 2nd Titanium Panset with this simple lightweight "Pack Bowl".

Normally we boil water in one pan and use the 2nd to serve food in, or eat breakfast in. It never hits the stove.

This collapsable bowl can be trimmed down to size and holds boiling hot liquids. I trimmed it down to the 1 quart mark and it weighs in at 0.6 oz.

The 2nd panset was 5.0z, so I'm trimming a staggering 4.4oz off my gear list with this addition.

Available from Backpackers Pantry – $6 for a pack of 4.

We stopped using this as we found it's large size to be a little annoying. We have since just taken a simple disposable glad tupperware bowl and cut the heavy rim off. This has worked really well, and comes in a little less as 0.5 oz.