It was 4am and it was cold. My watch was reading 38 degrees in the tent – chilly when you consider the daytime was in the 80's. 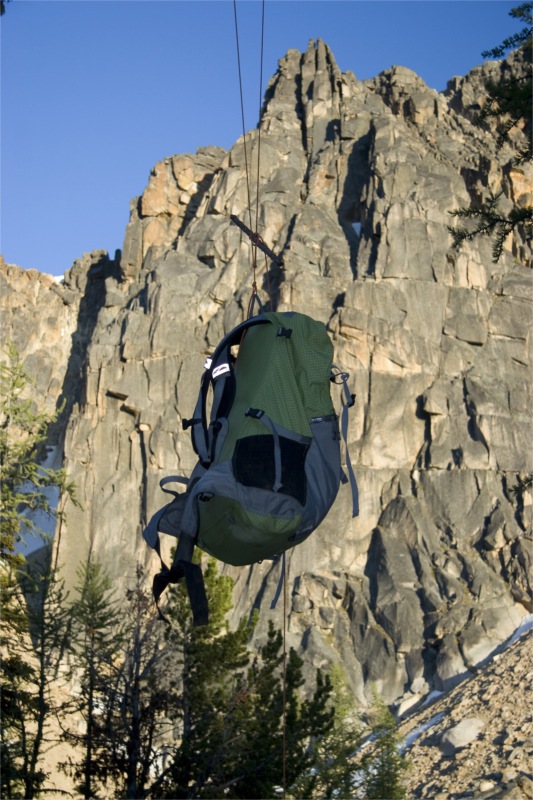 It was a rough night; and my sleep pad felt thin – I forgot to take my usual nighttime dose of Tylenol PM before hanging the bag for the night. I shut my eyes and tried to get back to counting sheep, or mountain goats maybe.

Eventually 6am came and the sun came up brightly through the trees and started to warm things. We expected to have a cold breakfast as we thought the sun would come up late – hidden behind Amphitheatre Mountain, but it rose perfectly between the saddle and hit the campsite early.

I got up to warm a little in the morning sun, and got some coffee going. The bugs weren't bad this morning, so it was nice and pleasant sitting out on the rocks.

We ate breakfast, did camp chores and then spent a while doing extensive foot repairs. We debated if the best option for my now liquid filled blister was the lance the skin and drain the fluid or not. The fluid supposedly serves as nature protection – but it sure makes things feel less comfortable with a swollen bulge in your shoes. We decided to leave it intact at least for now. Plenty of duct-tape and gauze later and we were all ready to roll. Nigel and Tim were sporting some new foot-sores now too – so they deployed some preventative measures of their own.

Just before we left camp, my satellite pager went off. My heart fluttered with fear. Surely Theresa can't be going into labor we're too far from the road to evacuate in any reasonable time. I checked the message and it was indeed from Theresa – but just some sweet words of encouragement. It was a cute to get messages from her on the trail – kind of like being in primary school getting little love-notes passed from another classmate with a crush; but also weird to receive them one-way and not be able to text-back.

We left camp around 8 am and decided to take a ˜shortcut' to Remmel Lake that was marked as hard to follow  on the Green Trails map. We went off in search of the shortcut. 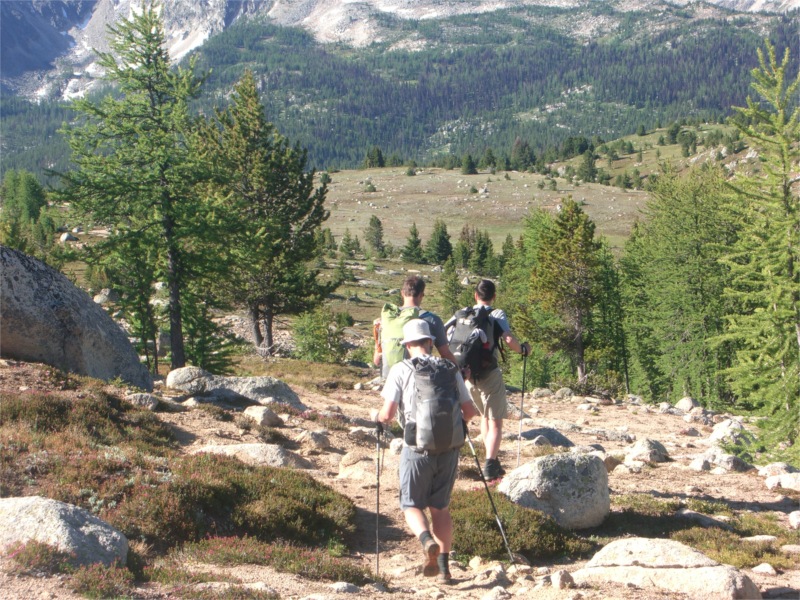 The ˜hidden' trail was rough going at first – not that it was hard to find, but it wandered through a marshy area with heavy horse damage on the trail – so there was deep unpleasant mud to walk in. After a while, the trail did start getting a little trickier as we climbed up into a rocky area with little vegetation. It looked like one could do a neat side-trip here up into a saddle that appears like it would look down into the Amphitheatre. However, we elected to continue on.

Eventually we re-found a trail and it popped us out into a stunning meadow area, with breathtaking views all around. A small stream ran through the base of the meadow and I broke off from the group for a while to get water from the stream. Walking back towards the group, I realized that the ˜grassy looking meadow' I was in, was actually thick with flowers with green-buds on just waiting to bloom. We were a little ahead of the curve due to the late snow melt, but I sure wish I could have seen this area in full bloom. Still – it was very pretty as it was. 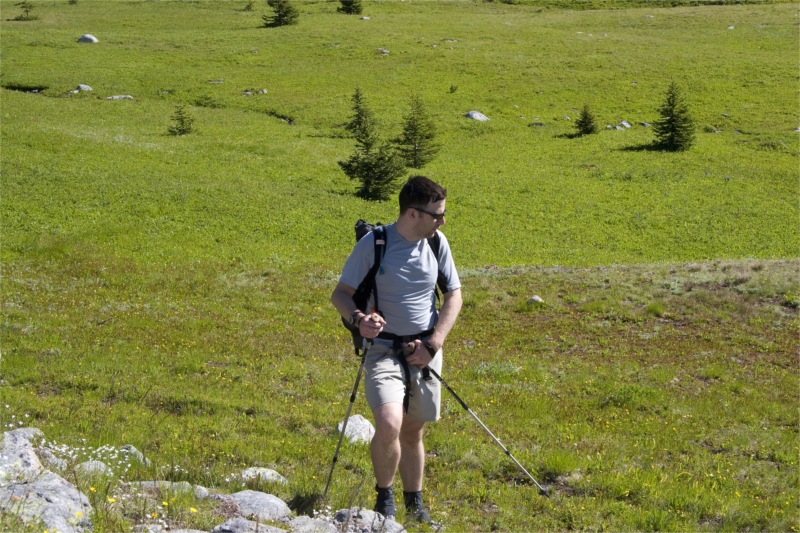 Further on from the meadow area we walked into an area with what appeared to be a somewhat permanent camp. There were white tents, a propane tank and a fuel drum. The camp seemed still – and a deer was munching grass on the other side of it. We assumed perhaps the trail-maintenance crews stayed here? 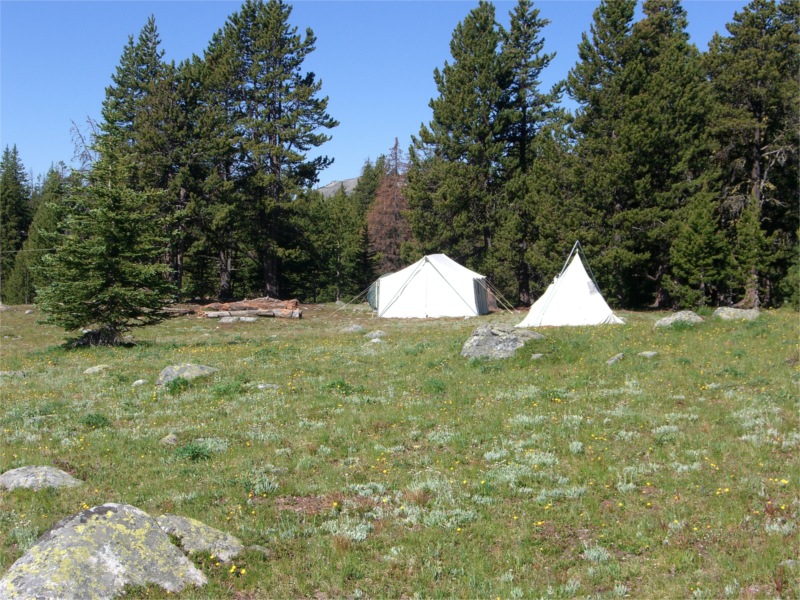 The trail descended rapidly until it dropped us out near Remmel Lake around 9:30am. Remmel Lake was wide open and very expansive. Plenty of horse damage here, but pretty none the less. There wasn't a sole in sight during our time there. I kept peering over the other side of the shore – half expecting to see some a bear or other large wild-life – but it was still as could be.

As you leave the Remmel Lake area there is a very tight hairpin turn off to the left – which is easy to miss; which is the trail leading down to the Junction to 4 point lake. The decent was long, and pounding on the feet. In true Tim style – he decided he would ˜jog' (more of a ˜sprint' in our book) down the trail and meet us at the junction. He gained a good half-hour over the rest of us by the time we caught up with him.

In Tim's absence, Nigel and I debated on what we wanted for lunch. Cheese Crackers and Salami won out again – and our plan was to snack at the junction. Half way down I  had a bright idea We stopped in a chilly stream and filled up a left-over foil pouch from a freeze dried meal last night with water, and plopped the cheese and Salami (Vacuum sealed) in it. This was my trail refrigerator  and had a good 35 minutes to get the cheese nice and cold for lunch. Sure – it meant carrying an extra pound of two of water – but our packs were very light at this point in the trip. 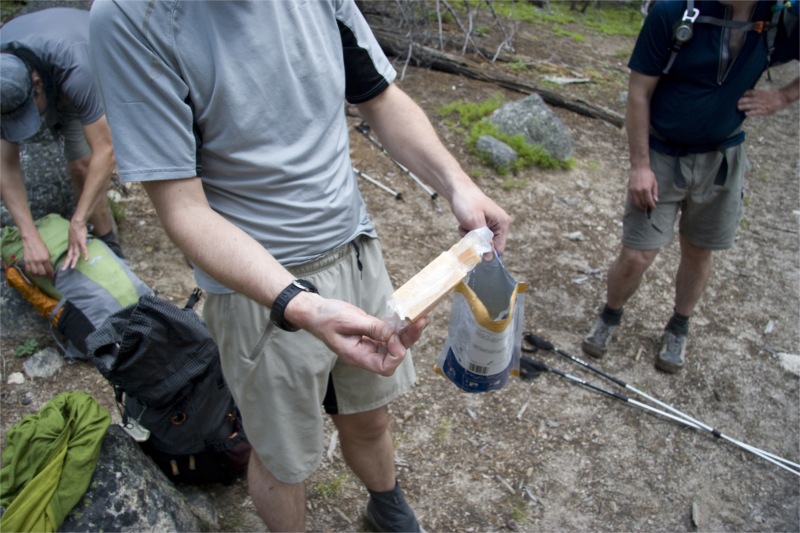 We caught up with Tim and ate lunch – out came the head nets – as lower in the woods the mozzies and biting flies came out – obviously attracted to the delicately chilled Aged Cheshire Cheese on the menu. 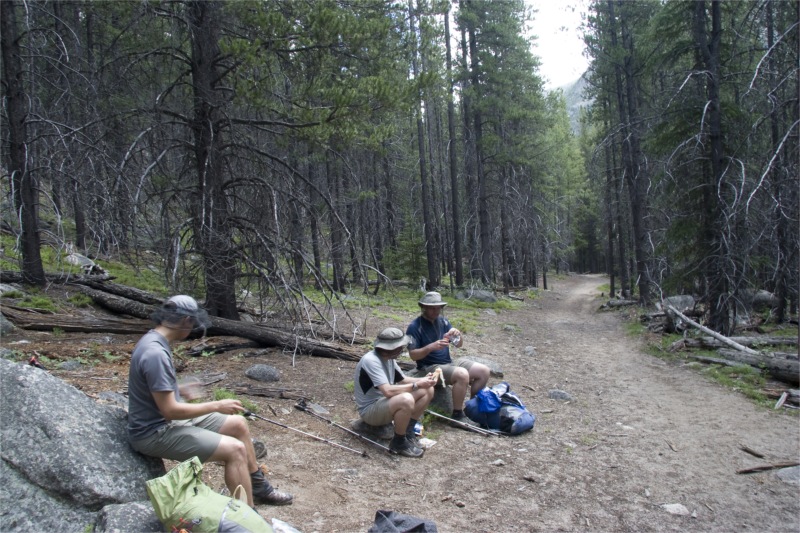 It was tough call – four point was supposed to be very pretty, but it was really early in the day still. The long last day didn't appeal either.  We decided to skip four point and push on to the first camp. 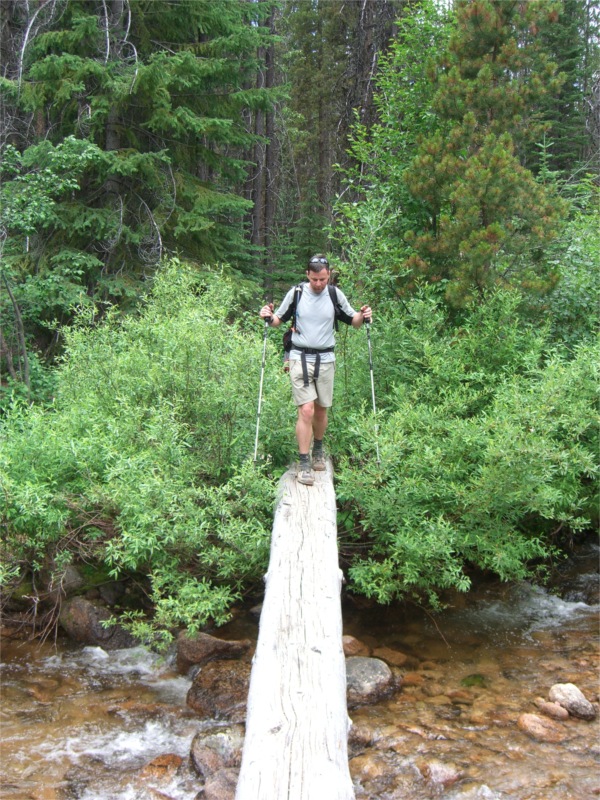 The eight miles along the Chewack valley were long and gradually descending. We arrived at camp around 3:30 pm. My blisters were burning and so I went to dump my feet in the stream to get some relief.

Nigel, Tim and Bill started the next debate

So it's only 3:30pm – which is pretty early in the grand scheme of things  (uh oh a very slippery slope) 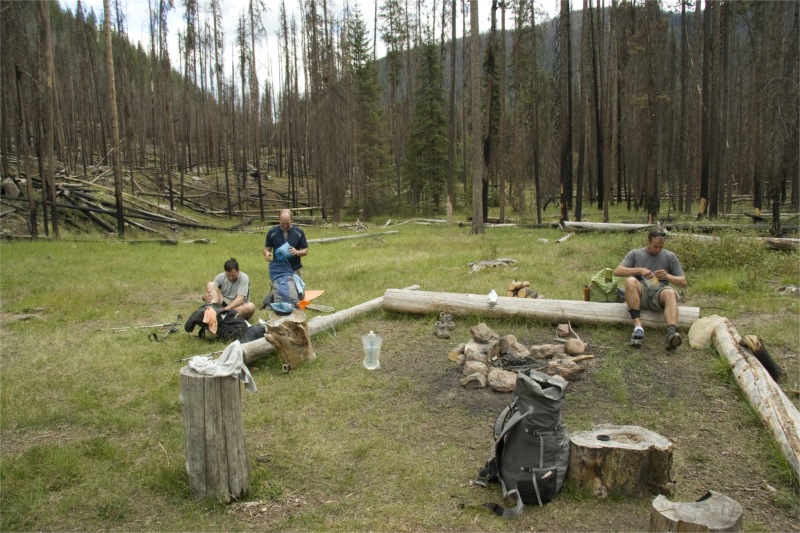 We had a few more options to consider:

We spent a good hour debating our options and repairing our feet. We'd used up all our duct-tape on blisters and were down to just a few plasters. At 4:30 we took the final poll – each of us first a first and second choice vote. The votes came out 2,0,2,4 in favour of Margaritas! So on went the packs and out came the polls. 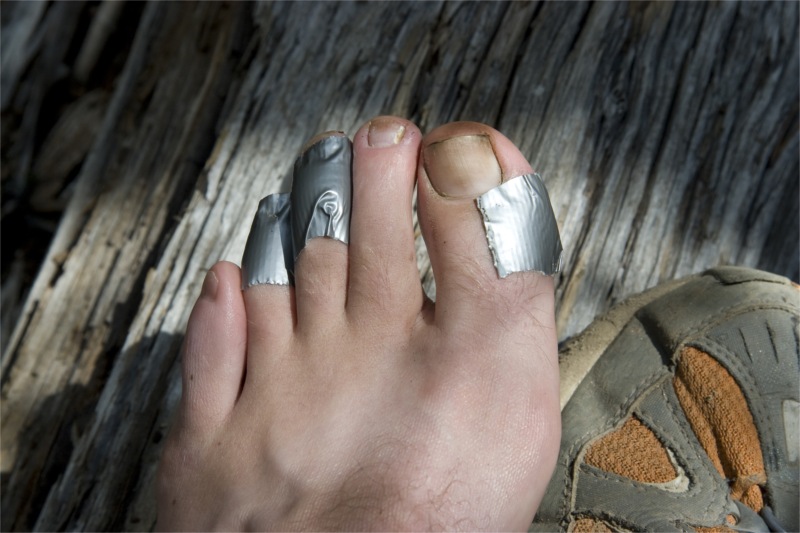 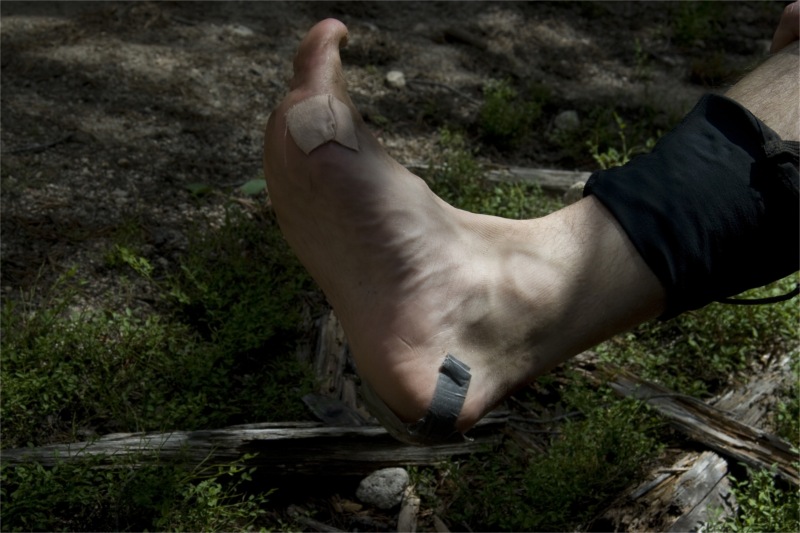 The push out was hard work – it had been a long day so far – over 16 miles to the camp site, and we were adding another 5+ to get out. We forgot how unmaintained this section of the trail was – but seemed to brute-force our way under and over fallen trees with a feverous vigor! The power of the mighty Margarita promise! 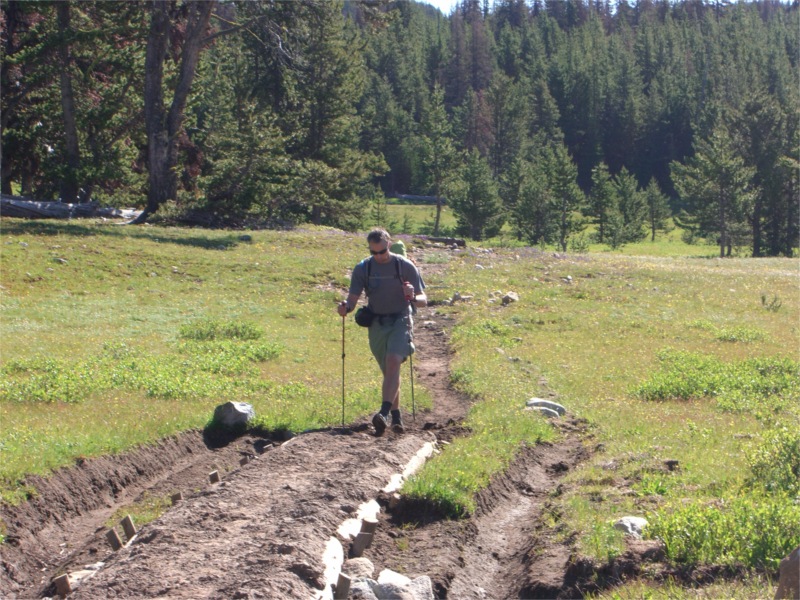 Two hours later, at 6:40pm we arrived at the bridge we started the trail on.

This time the trail head was not empty – a forest service truck was there, and two frogmen were swimming in the river in dry suits. They were surveying fish – and had found Chinook Salmon, Rainbow and Steelhead Trout swimming upstream. We chatted with them for a while while we washed up in the river before heading for civilization and tequila.

[Apologies for the long delay in getting this written up. A newborn sure takes a toll on ones time to be able to write blog entries!]