Day 3 was an abrupt start. Around 5 am – as the sky was lightening I heard a shriek from Nigel, muffled by my earplugs- "Maaaattee – wakeup – there's a mouse under your hat". Sure enough, a little field mouse had found enough of an opening in the zipper of the Tarptent that we left open to allow a platy-hose to supply water in the night. 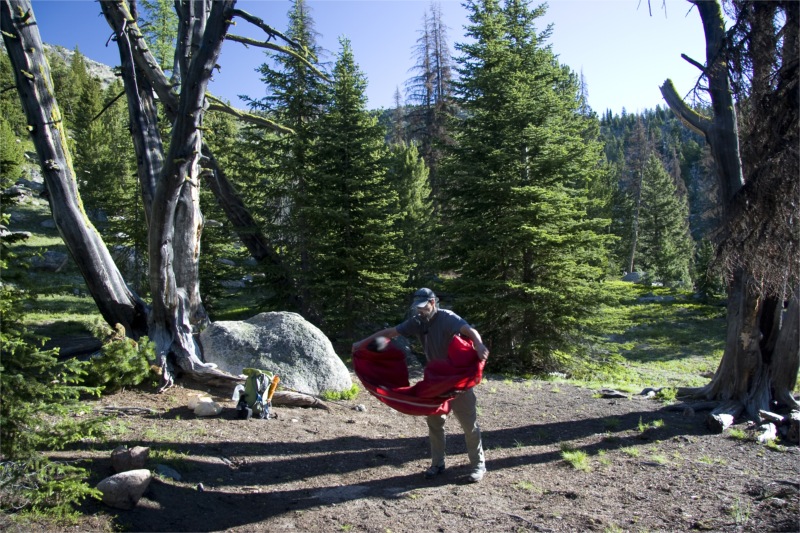 Breakfast was another hearty Swiss Muesli with coconut milk – spiced up with some de-hydrated raspberries that Nigel's wife Lynn made for us from her garden. They were perfectly tart! We also drank a bunch of Chia Seeds to see if the extra fuel would help us get going.

We were on the trail by 8am and my blisters were already very sore. Boundary trail continues past haig mountain, around teapot dome for another 7.2 miles on the way to Tungsten Mine. There were plenty of meadows and larch trees and ever-improving views along the way to keep us entertained. 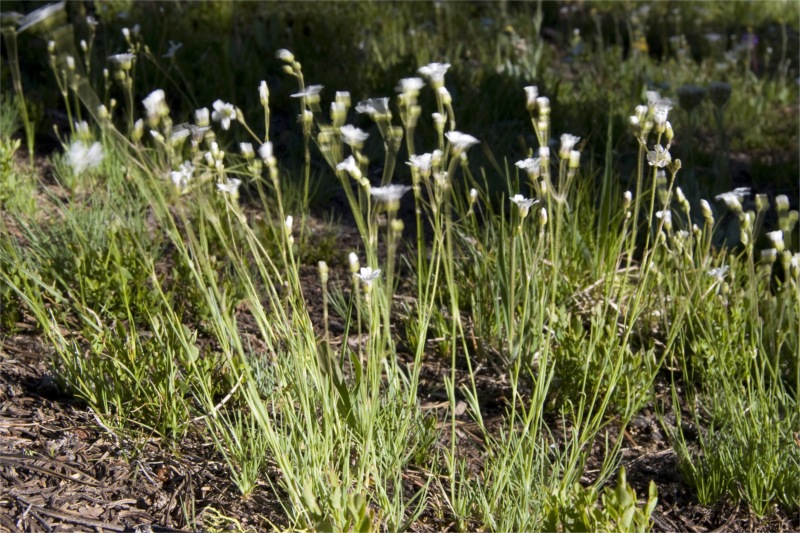 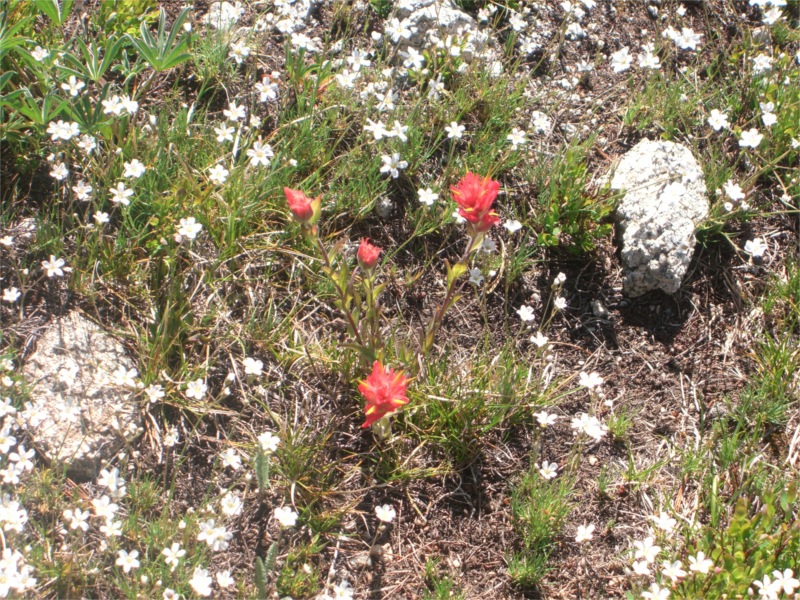 On the other side of teapot dome we found a great looking unmarked campsite with good water sources. 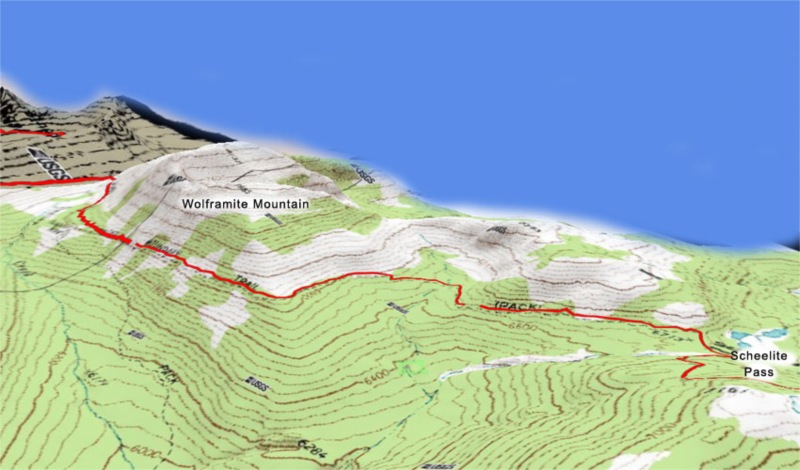 After several hours we finally arrived at Tungsten Mine.. There were a few clues we were near the mine – a stream crossing the trail with some rusty iron pipe sticking out and some other old iron artifacts. The trail forked – to the right to the upper area of the mine and the cabins – the left down to the lower area – the pit and machinery. We went right and straight for the cabins. 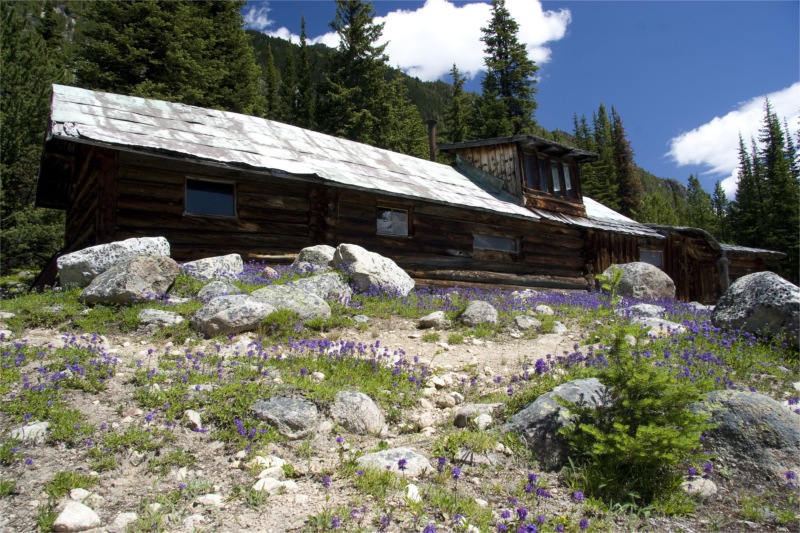 I love stumbling on old buildings like this out in the wild. Either old cabins, look out towers or ruins. It makes for a great time to pause and ponder the people that were here long before us. 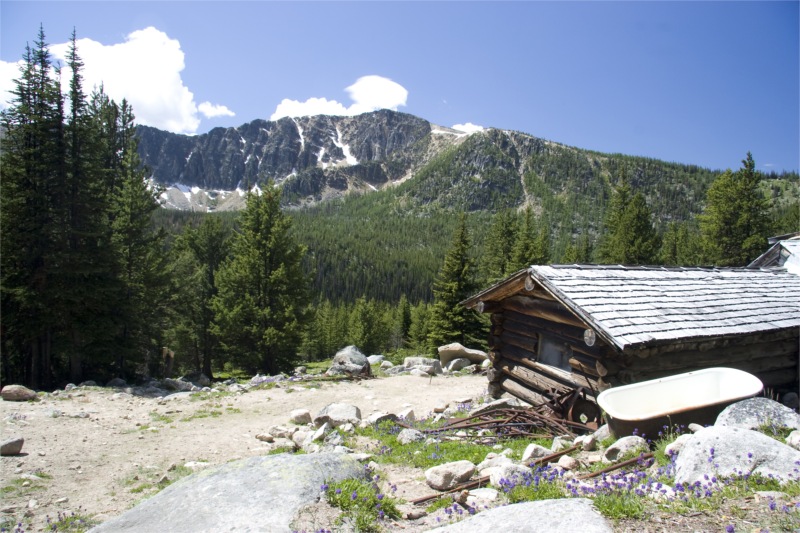 It was around 1pm and time for lunch. We hadn't needed to stop for a mid-morning snack today – the Chia Seeds seemed to be doing the trick and sustained us for longer than usual.

The mine had two main cabins – a smaller on with an drum-stove and a larger one with more amenities. 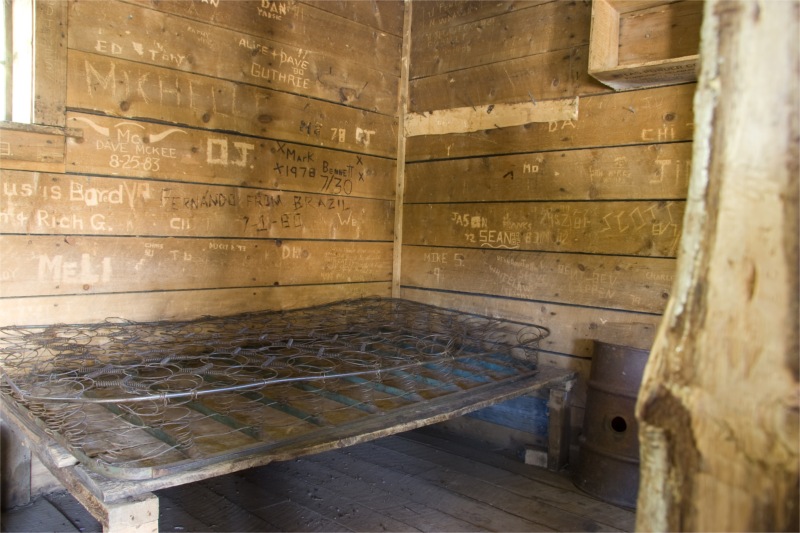 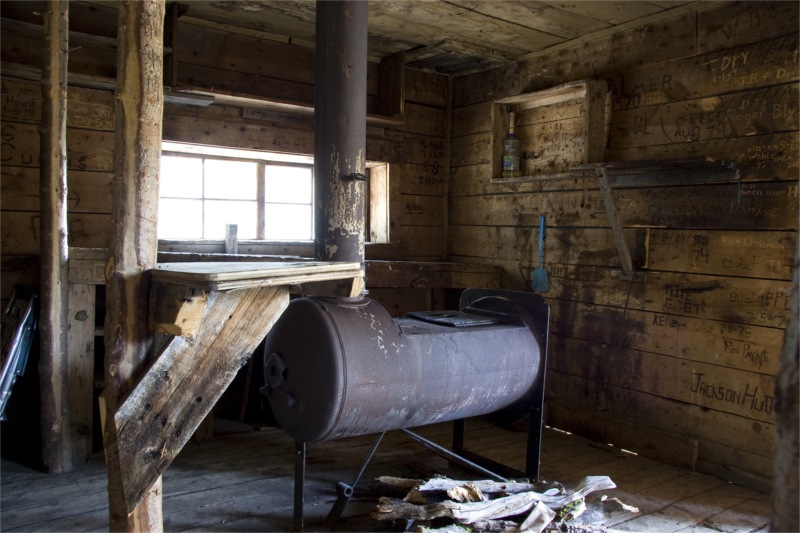 Nigel and I headed for the small one while Tim and Bill searched for water to treat. I had to sit – my blisters were excruciating now. I looked at the damage – and it wasn't pretty – both heels had quarter-sized water pockets forming – owch – we still have a long way to go. 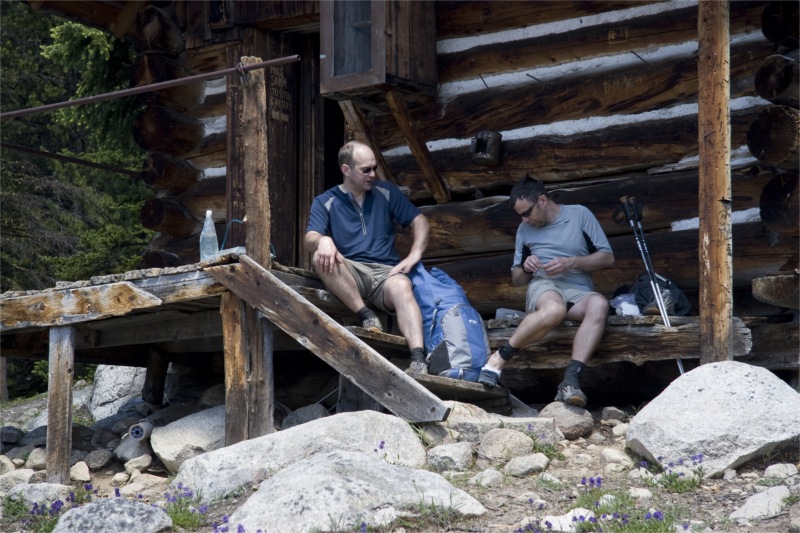 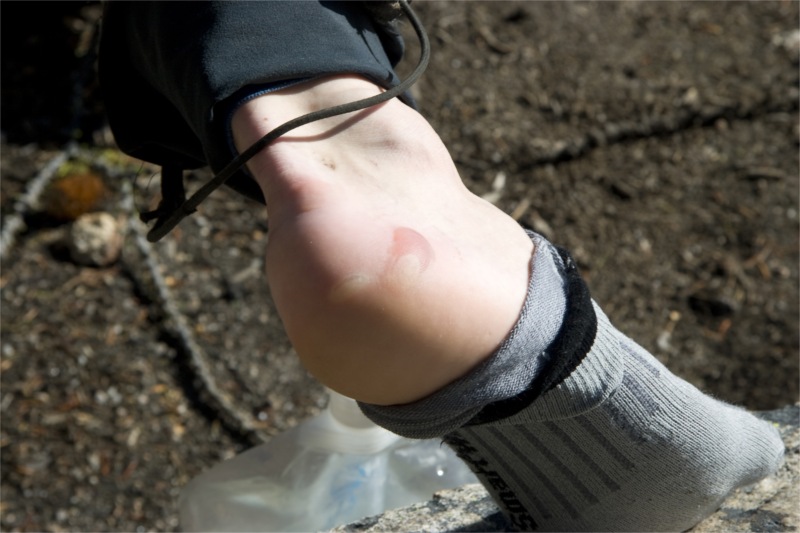 We explored both of the cabins and then wandered down the hill to explore the mining area. The views of Apex Mountain from the mine shaft opening were spectacular. I can think of worse places to work each day. 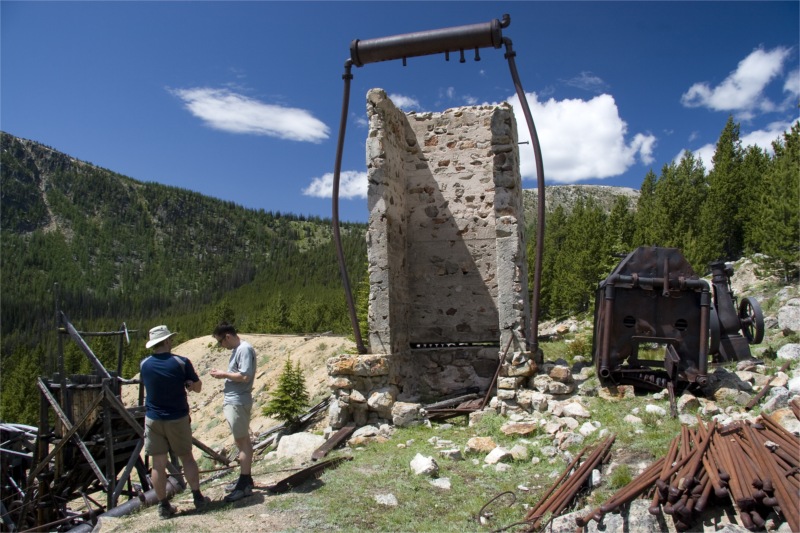 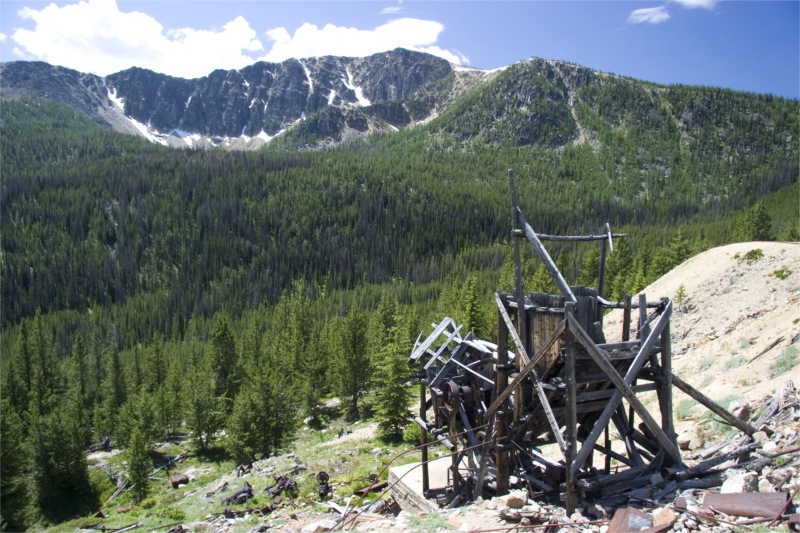 For more details on Tungsten Mine, Nigel has an excellent write up here.

The only sad part for me about the mine area, was all the graffiti in the cabins. So many name carvings in the old logs. Some people have been more thoughtful and carved on wood plaques and hung them instead, but not nearly enough.

I was also shocked (no pun intended) to see remnants of Knob & Tube electrical wiring. I was surprised that they would have electricity all the way out here. 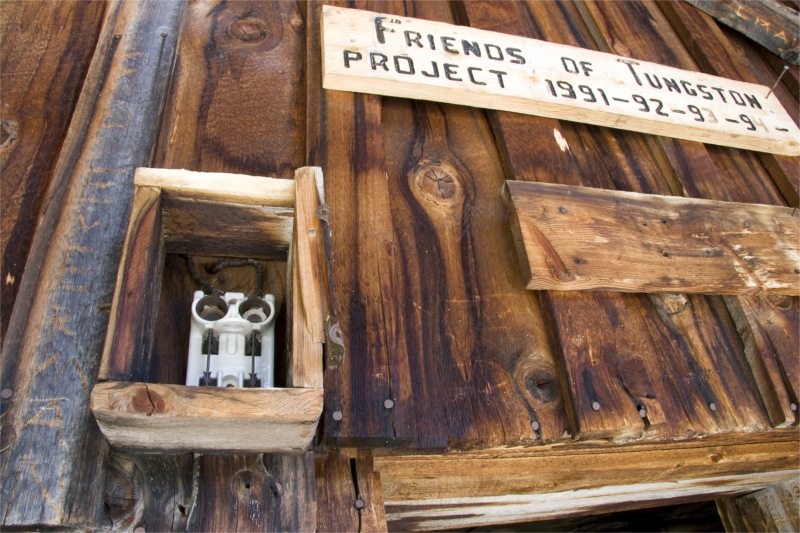 After several hours of exploring the mine, we started to move on. The guide suggested that water was scarce between the mine and cathedral lakes; so we loaded up all of our Platys at the Mine. Nigel and I rock-paper-scissored for who carried the water load. Nigel won.

A half mile from the mine, I was trailing behind the pack – wobbling slowly on sore blisters. Nigel took pity on me and ended up taking the water load anyway. 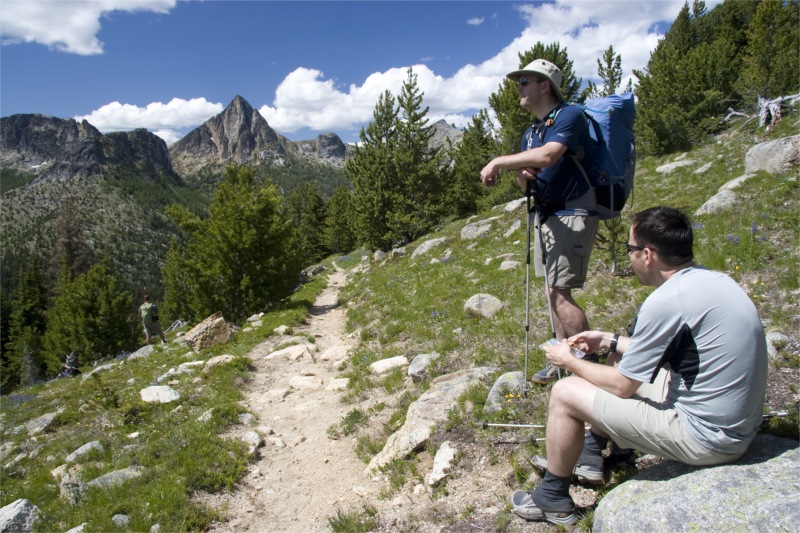 The trail between the mine and Cathedral pass is stunning. A miles or so after the mine the trail enters some wide open meadows around Apex pass. The back of Apex Mountain sweeps away into the distance – reminiscent of Annapurna or the back of Half-Dome. Larch trees are abundant here and it makes us want to come back and do this trail in the fall – to see all the leaves in their golden glory. 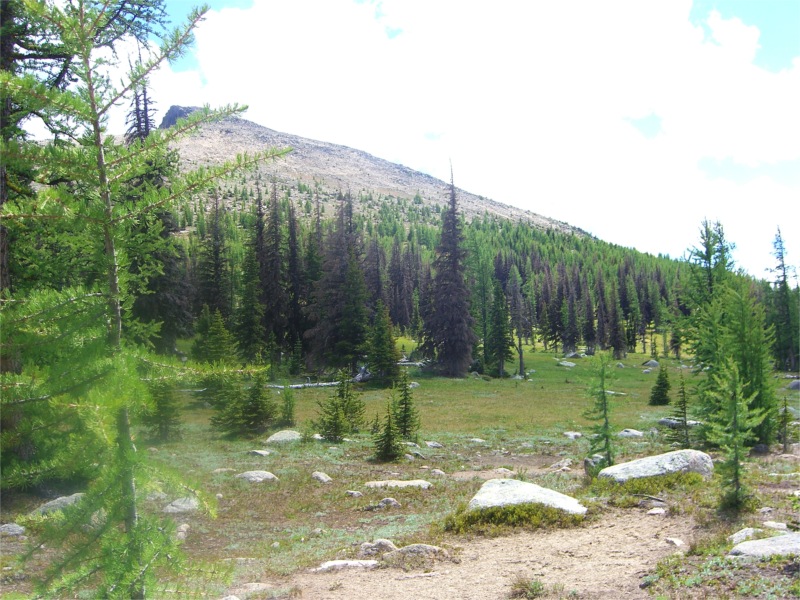 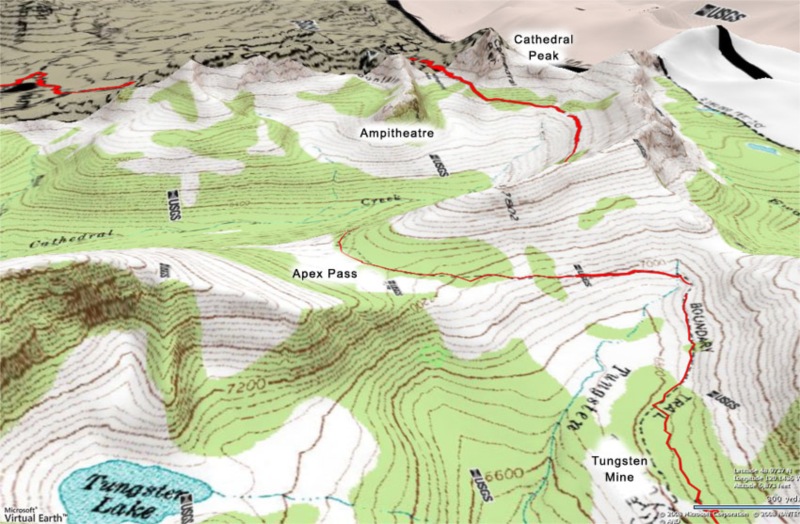 As we hike on, the views of Cathedral Peak become ever more impressive – revealing a deep vertical fissure down the center which is still harboring snow.

About a half mile from the pass, the trails passes an unusual granite band that cuts deep into the hillside. The area we cross it has a good water source that appeared like it would still be around in later summer. 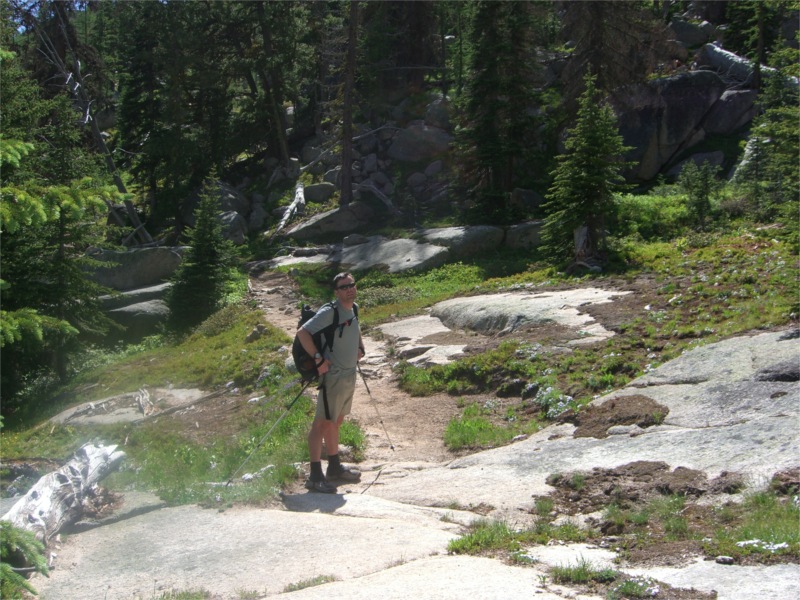 The last stretch climbed gently to the pass and looking down into the valley below – there were many meadow openings in the trees, which made it appear like a well manicured golf-course, with huge granite slab for additional dÃ©cor.

A few final switchbacks and we were at the saddle of Cathedral Pass. The wind whipped up and howled around us here, so out came some layers. We could see a long way into the distance – all the way to Windy Peak. We wondered if they mis-named it – and we were standing on Windy Peak instead.

Down into the other side of the saddle we could see Upper Cathedral Lake, back-dropped by huge cliffs and a small shallow melt-pool / pond to its upper right. 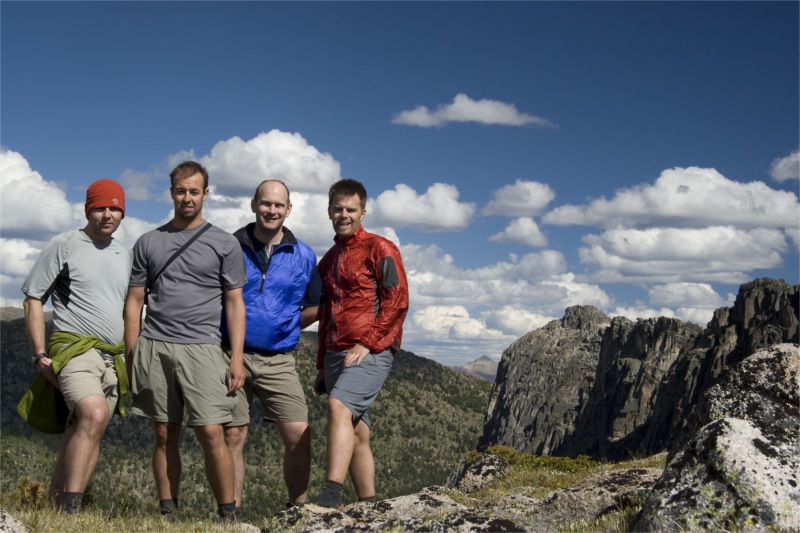 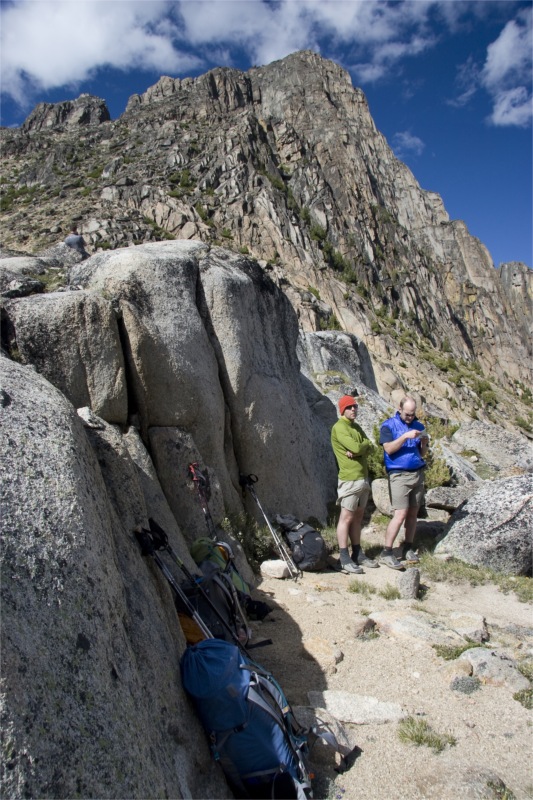 After a rest and photo opportunities at the Saddle, we wandered down into the Cathedral area. We were giddy with excitement for how pretty it was and knowing we had almost accomplished another solid day on the trail.

We stopped at the pool to check it out – it was shallow – maybe two feet at best with a muddy bottom. It was also apparently a breeding ground for mozzies – as there was a lot of Lava floating on the surface – which swam down into the pool if the surface was disturbed with a pole. 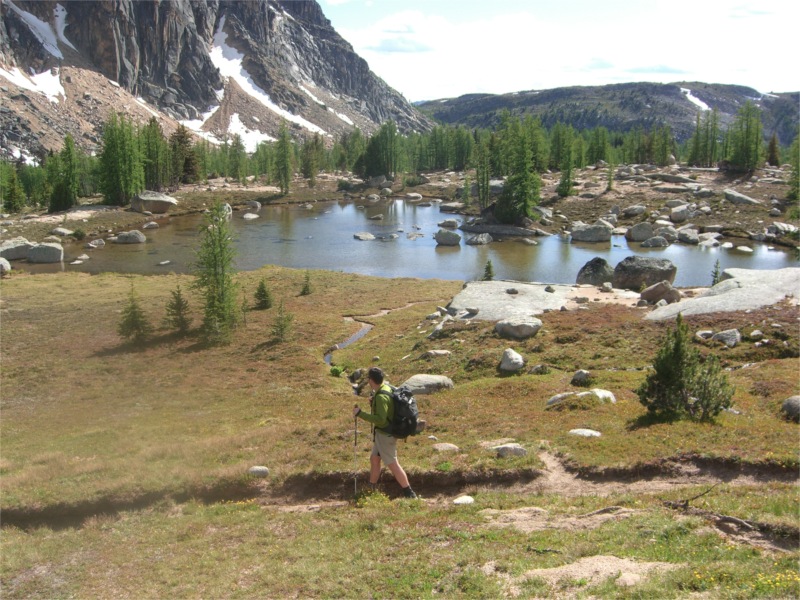 After sticking our feet in – it didn't feel too cold – so we decided to take a little dip. I leaped in first, followed by Nigel and then Tim. Bill wasn't going to fall for it – he knew all too well that the mozzies love him – and would likely be eaten alive if he got so exposed.

I can't think of anything more invigorating for the body and soul than dipping in a cold mountain lake after a few days of backpacking. Outstanding! 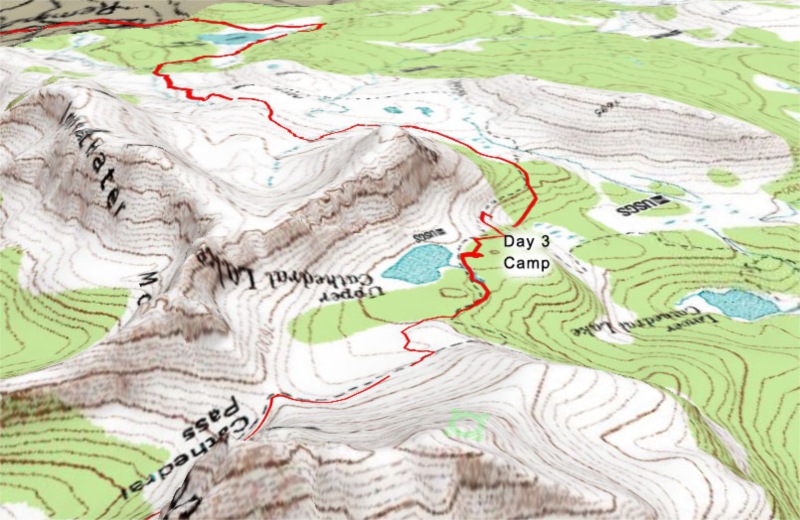 After drying out in the sun – we put out gear back on and head down to the main lake to find camp spots. 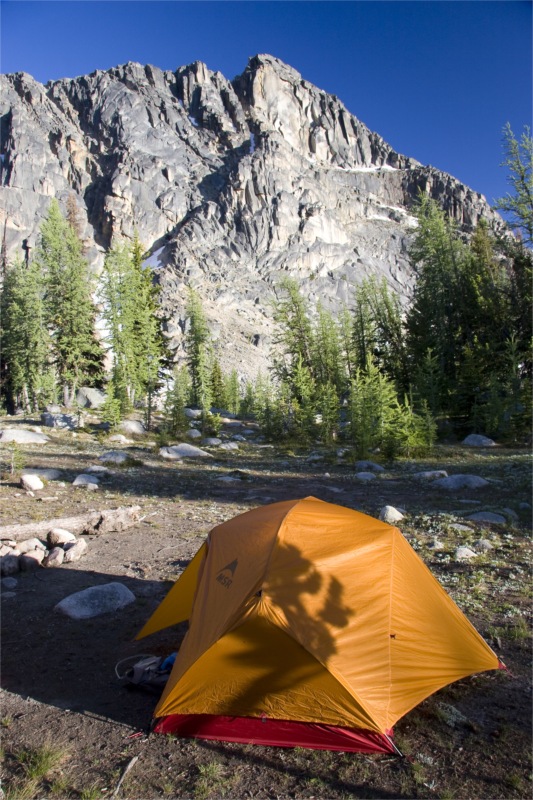 The camp sites along the shore of the lake were closed for restoration, so we ended up camping in what appeared to be a horse camp up on a slight hill – with peek-a-boo views of the lake.

We had not passed another sole all day – and were the only people camped at the lake. Hard to imagine on a year were there are little other places to hike (due to lingering snow) and it being well into summer.

We ate a fine dinner – hung our bags, and chilled by the lake watching the sun go down. As the sun dipped, it lit up the cliffs by the lake with warm orange hues and lingering shadows. The trout leaping out of the lake and breaking the silence with their splashes only added to the ambience. 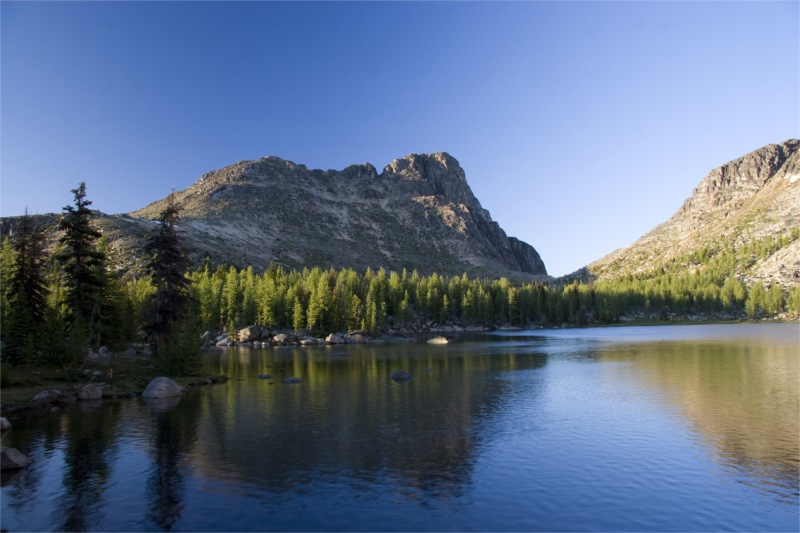 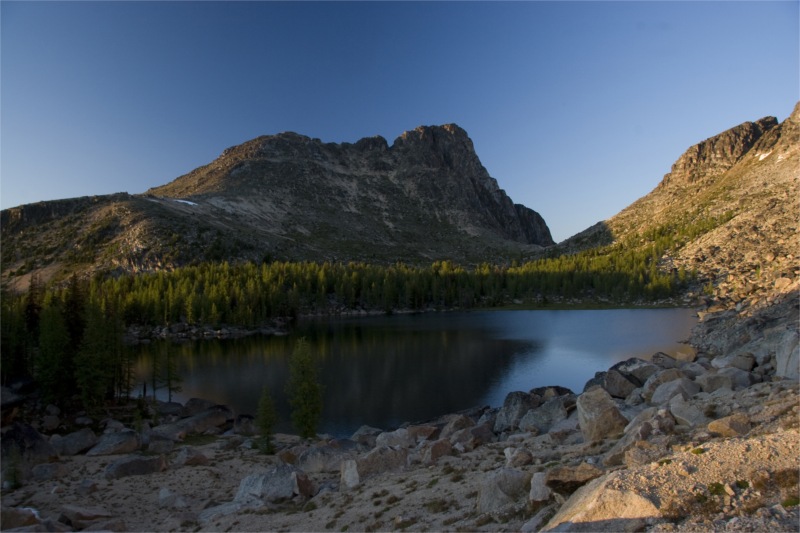 After the light faded over the lake – Tim and Bill found a great spot high up the rocky scree where they could see the rest of the sunset in the other side of the valley down into lower Cathedral Lake and the mountain in the distance. 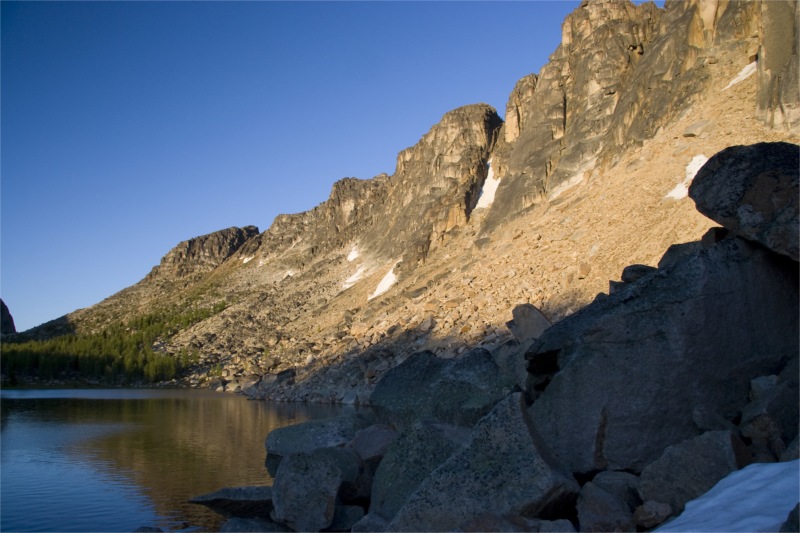 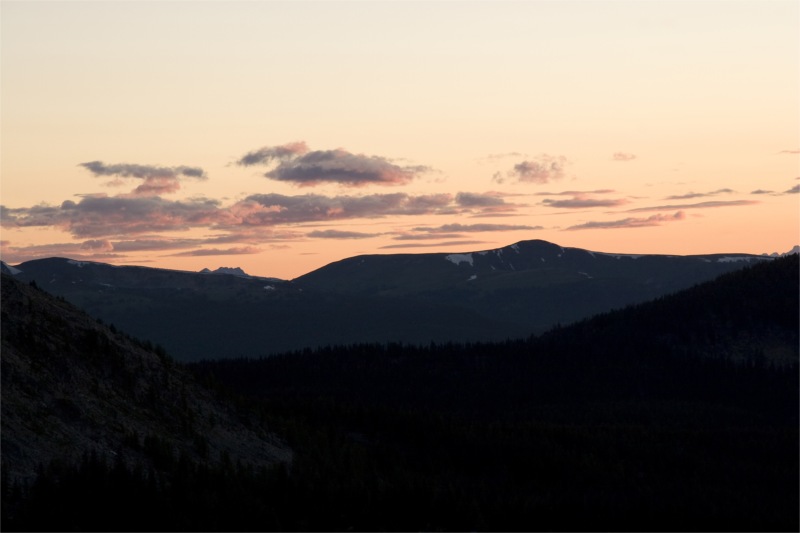 [Oh yeah – Tim gets all the credit for the outstanding photos and the team-player  award for lugging in his Canon 20D.]