We awoke to blue skies and a soggy layer of condensation on the Tarptent. I blame the internal moisture from last night entirely on Nigel's snoring. All I can add is that I sure am glad I packed ear-plugs.

Breakfast today was an interesting affair. We had two competing meals: Team A (Bill & Tim) entered the "coff-meal" while Team B (Brett & Nigel) entered "Granola with fresh blue-berries and coconut milk". "coff-meal" was Tims invention – it consisted of instant oatmeal mixed with instant espresso in a zip-lock bag. I can't vouch for the coff-meal – but the Granola / coconut milk was a hit. Even Nigel was impressed – which takes some doing give that he's a guru Thai-Chef.

We hit the trail at about 7:30am. The trail soon passed a turn on the left up Fire Creek trail. The route in the normal guide book takes this direction and fords the Chewack River. We chose to do the hike in reverse for a few reasons: a) we wanted to save the best for last and gradually work our way into Cathedral Lakes and b) we were told there was still snow at upper Cathedral and an extra few days of melt-out would be in our favour, and c) Fire Creek was heavily burned out and has not been maintained. The crossing of the Chewack didn't look that bad – but it looked knee-deep in places. The ruin of an old shelter could be seen on the other side of the bank. 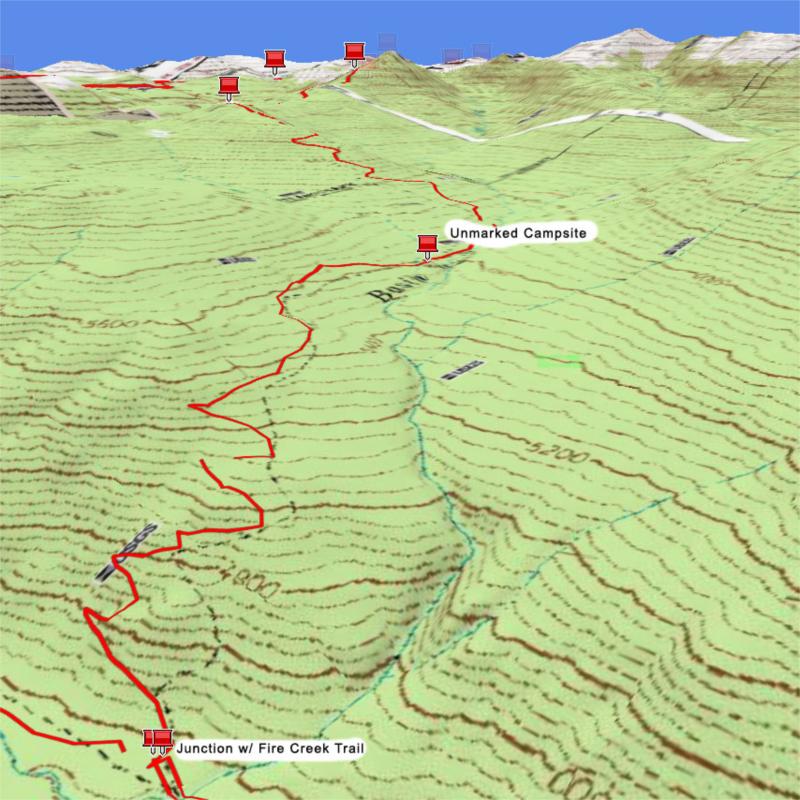 Our path went straight for another half mile or so, then forked off right onto Trail 360  and climbed 5.6 miles and 3400 feet up a ridge towards Topaz Mountain. The climb gets steep with some loose switchbacks to aid the way. About a quarter of a way up the ridge, the trail crosses Basin Creek with good water and camps near by (Approx Lat: 48.907024, Long: -120.0301568). We saw the three hikers camped here that blew by us last night. They were preparing breakfast and we stopped to chat. One of them was an local who used to climb a lot in the Cathedral area – he told us that it would be unlikely if we hit snow now – and gave us some good beta on camp sites before Cathedral if we needed them.

The trail continued, climbing up the back of a burnt out ridge with ever increasing views of the area. The trail gets hard to follow in spots – but it easy enough to follow the ridge line and get going in roughly the right direction. 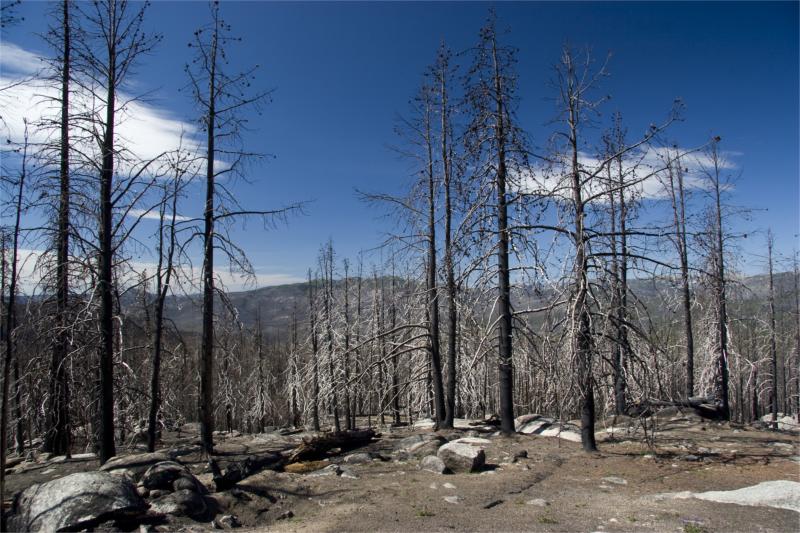 At 10:15 am we stopped for a mid-morning snack atop a plateau on the ridge with killer views. 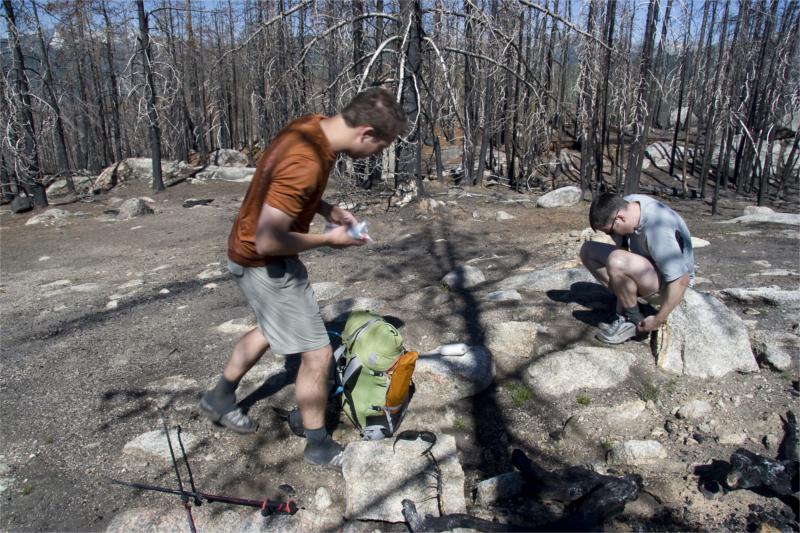 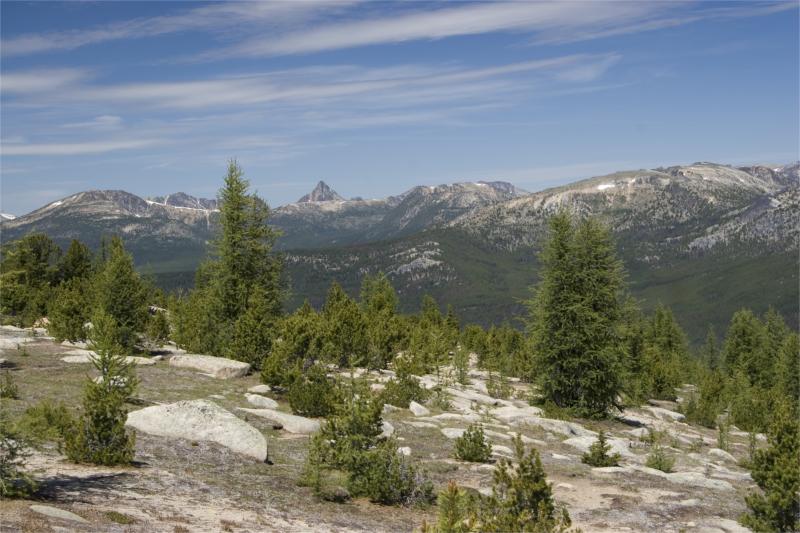 The trail continues and leaves the burnt forest for green canopies and larch trees, skirting around Topaz Mountain with great views of Windy Peak. The trail dips down into some lush meadow areas with some great spots for filling up water. Every step was oooh ahh  breathtaking beauty. 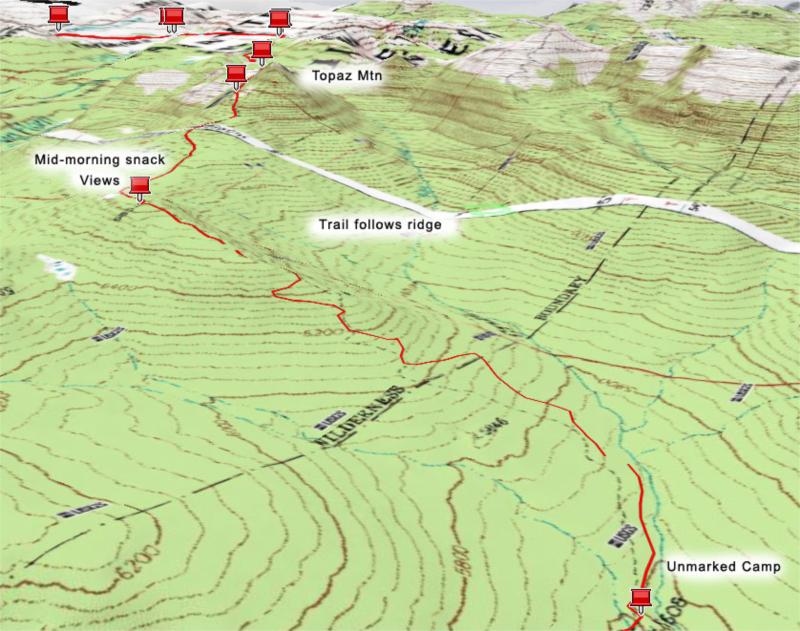 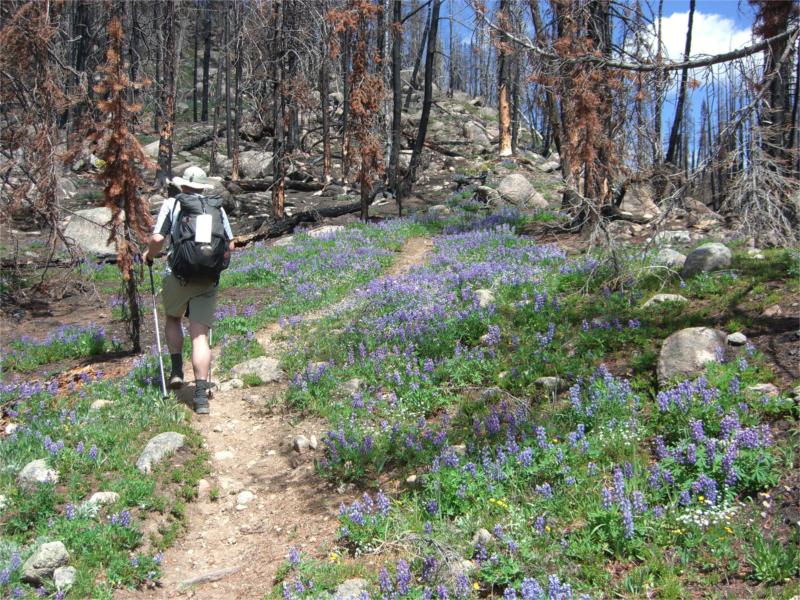 We debated a side-trip to Windy Lake or the top of Windy Peak – but decided we would rather push on an extra 7 miles beyond Louden Lake and look for a less-bug-infested area (we had read a some posts from hikers a few weeks prior that complained on bad bugs at Louden).

The trail continued for another 3.5 miles through open country – with view after view. It was staggering at how expansive the area is – you could see for miles – and not a glimpse of humanity in site. I had no idea this area right in my backyard even existed and judging by the lack of people – nor do many others. 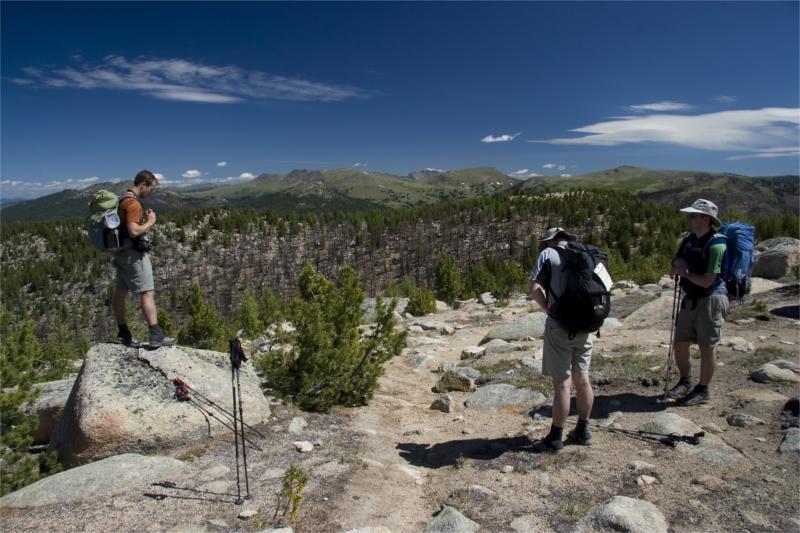 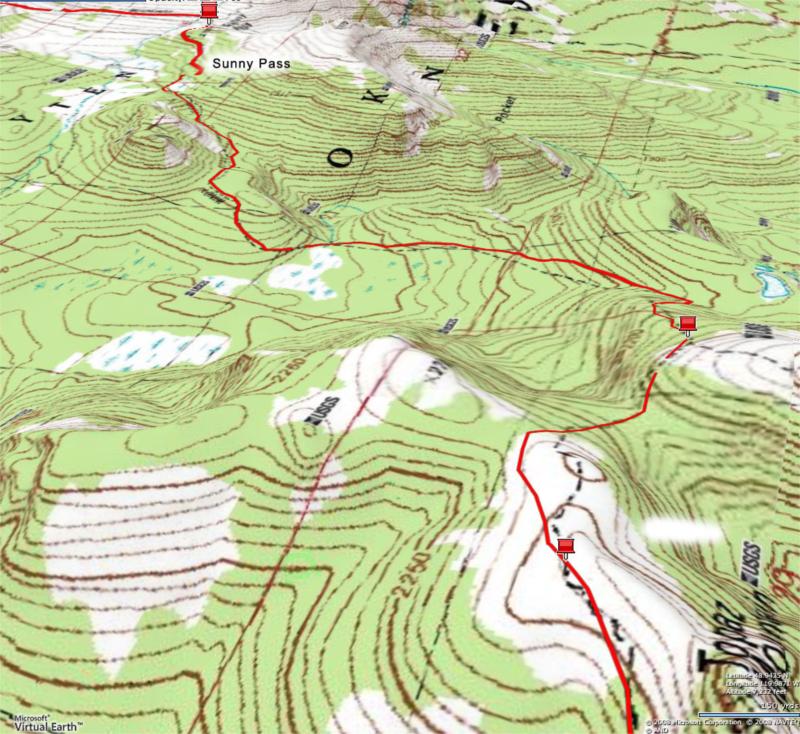 The trail passes through Sunny Pass and another 1.2 miles or so to the magnificent glory of Horseshoe Basin. Horseshoe Basin is a stunning area – not at all typical for the North Cascades – it reminded me greatly of hiking in the Lake District or North Wales back home in England. The rolling, smooth luscious grassy hillsides. Except here they were back-dropped with epic peaks in the distance. Oh – and there were no sheep ˜land-mines' with every step :). 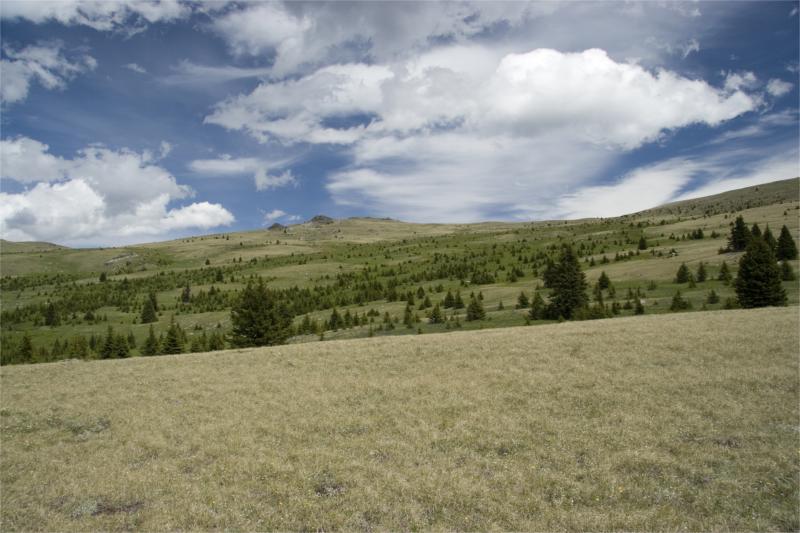 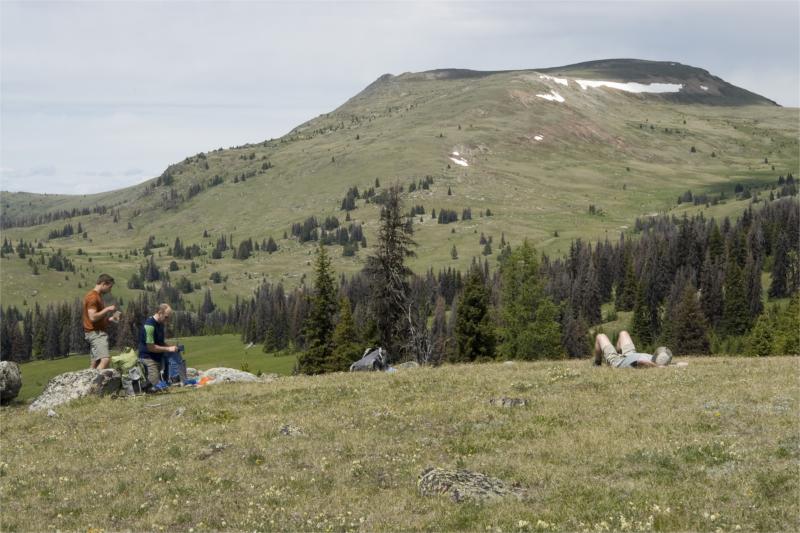 We dropped our packs on the grass here and took a much deserved long lunch break. Aged Gouda, salami and crackers were on the menu today and they seemed to taste better than ever in this setting. 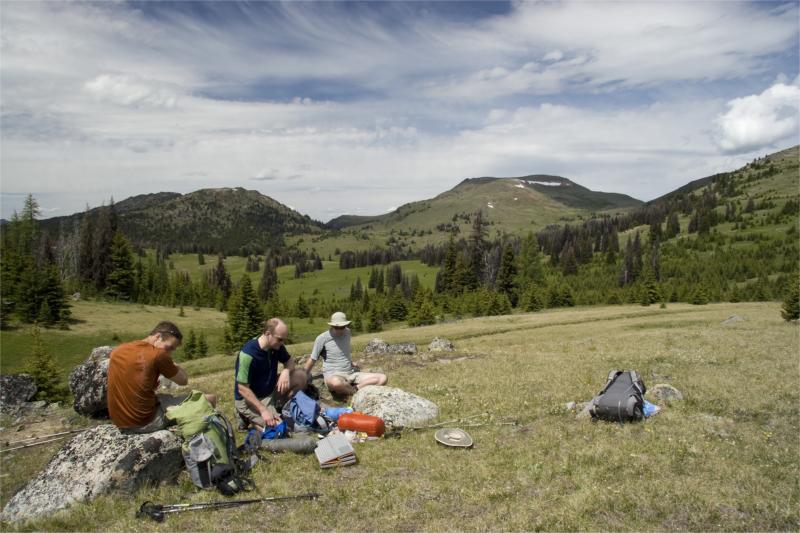 Tim wandered around with his DSLR taking some great shots. I like this long-zoom shot that shows how little we are on the horizon 🙂 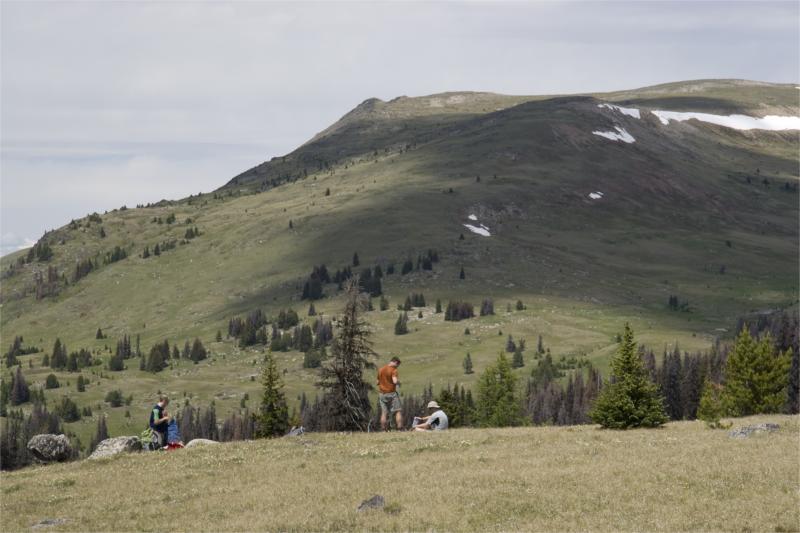 After lunch we were back on the trail heading towards Louden Lake. I noticed that my feet felt very hot – the first sign of blisters. However, I foolishly felt over-confident that it's been years since I've gotten blisters in trail-runners and so ignored the warning signs – putting it down to a hot day and logging almost 10 miles so far today. 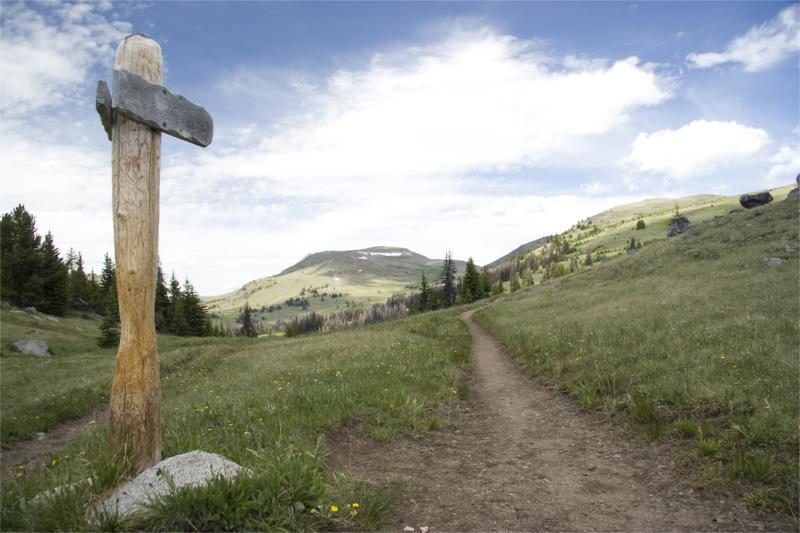 We passed Louden Lake close to 3pm – is a pretty lake (or pond perhaps) – small and shallow in the middle of a beautiful meadow area. The still and shallowness probably contributes towards mozzie breeding in this area. We saw 4 people on the far side of the lake that looked like they had already setup camp for the night. They appeared to be walking in the meadows and swatting themselves as if being chased by bugs. This confirmed our earlier decision that this wasn't the place to camp and we should push on another 7 miles to a camp near Haig Mountain. 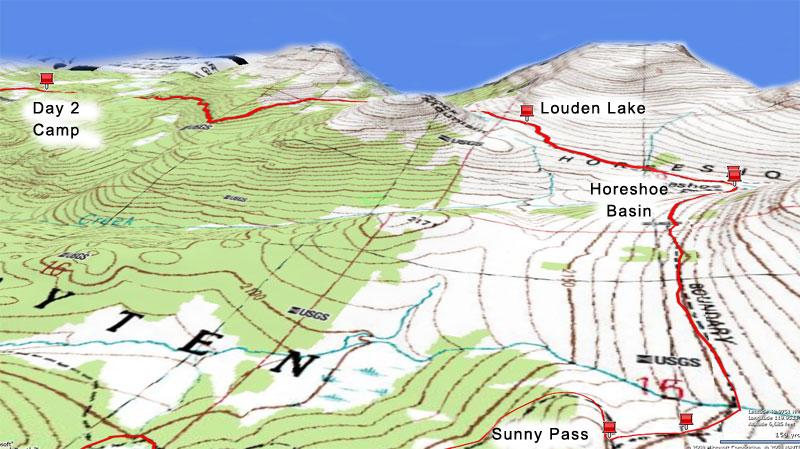 Now we were hiking on the true Boundary Trail – an old stock route used to bring supplies in an out of Tungsten Mine. The trail was good and flat to rolling for the most part and meandered through meadows. The meadows had flowers of all kinds – red, purple, yellow, white – all delicate and fragrant to hike in.

On the trail to Haig we passed two hikers and their dog. They appeared tired and we asked them where they were going. They had come from Tungsten Mine this morning and were headed out – they had planned on making it to Cathedral but were disappointed with the meadows and decided the Cathedral area would be too similar to Leavenworth to be interesting.

As we were beginning to get a little tired from our long day – Nigel whipped out some Margarita Shot Blocks. I'm sure these taste revolting off the trail – but the combination of salt and the fantasy of sipping an icy cold Margarita sure boosted our morale for the extra push to the end.

We arrived at camp around 5pm and soothed our hot feet in the stream. Owch – blisters – big ones. 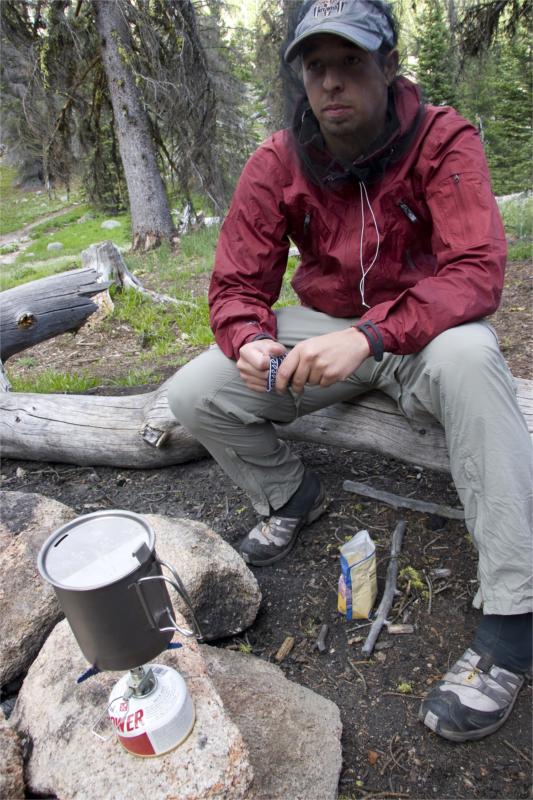 As soon as the evening rolled in – so did the bugs – this was probably the most buggy of the areas we camped. We were well protected with our headnets and other bug protection and so they didn't bother us too much. The Sawyer clothing-spray we used worked like a charm. Mozzies circled and took off as soon as they landed. It was so effective that I didn't even need to use DEET the whole trip.

Beef Stew for Nigel and I for dinner and Chili-Mac for Tim and Bill. Then we retreated to the tents to rest our feet from a long but very satisfying 18 mile day. 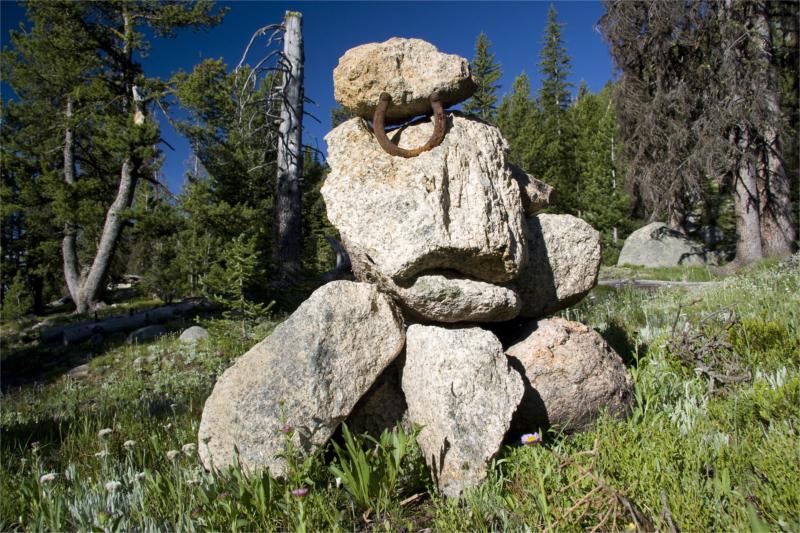