Permit Info: An overnight permit is required, but can be obtained from the Trailhead; no advanced reservations necessary. Northwest forest pass required for parking.

Getting There: From Seattle, take I5N 62 miles to Highway 20 (Exit 230), then east 128 miles to Winthrop. At Winthrop, turn North on West Chewack River Road which becomes FR #51 a (Amazingly well maintained) gravel road. Follow the main road all the way to the end – at Thirtymile Camp. 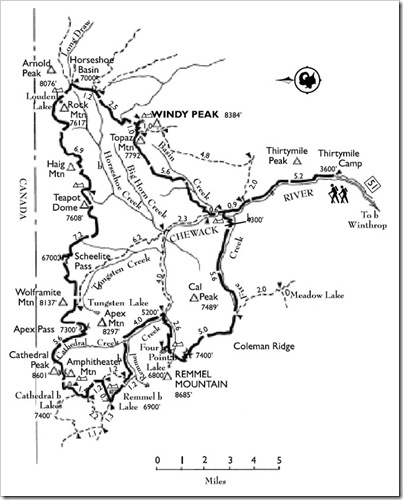 We chose this trip due to a heavy snow-year in the Seattle area. In early July 2008 most trails that would be open were not accessible due to a heavy lingering snow-pack. The Pasayten Wilderness area in Eastern Washington melts out early and is amazingly void of crowds.

We left Seattle at about 8:15am. As we loaded up the packs into the back of Tim's land cruiser I noticed all of the Platypus Hoses hanging out: "Make sure you water doesn't leak" I quipped. 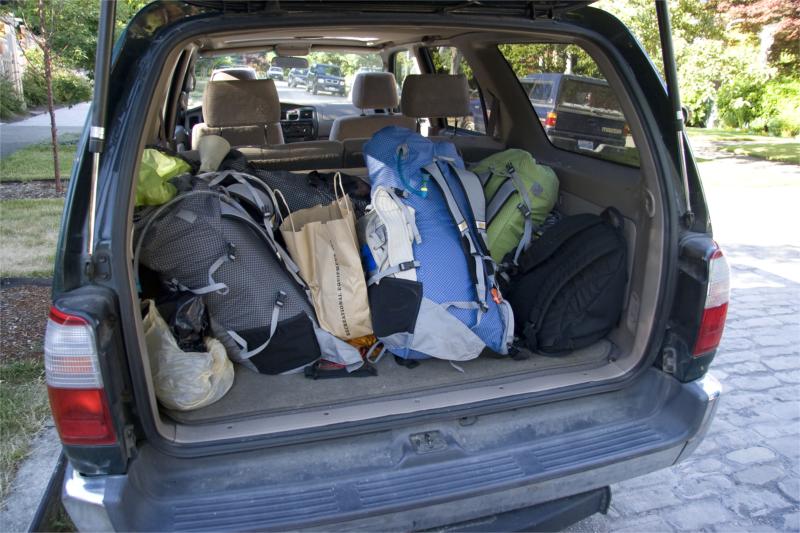 The drive was both beautiful and fast – it's a very pretty drive through the mountain passes to Winthrop. We arrived at Winthrop around noon. Our target destination was the Brew Pub for lunch. Sadly it was closed due to renovation – so off we went to the duck inn for Mexican food and beer.

Follow the link below for the rest of this report.

Around 1:30pm we were on our way to the trail head. The road in was amazingly good and void of any potholes. We wondered if it was in such good shape as it is seldom used. The green trees broke and soon we were driving through a heavily burnt forest area.

A few miles before the trail head we passed a roadside memorial. It was in memory of four firefighters who were trapped here in 2001.

They were so young – it was a humbling and somber experience to witness their graves. 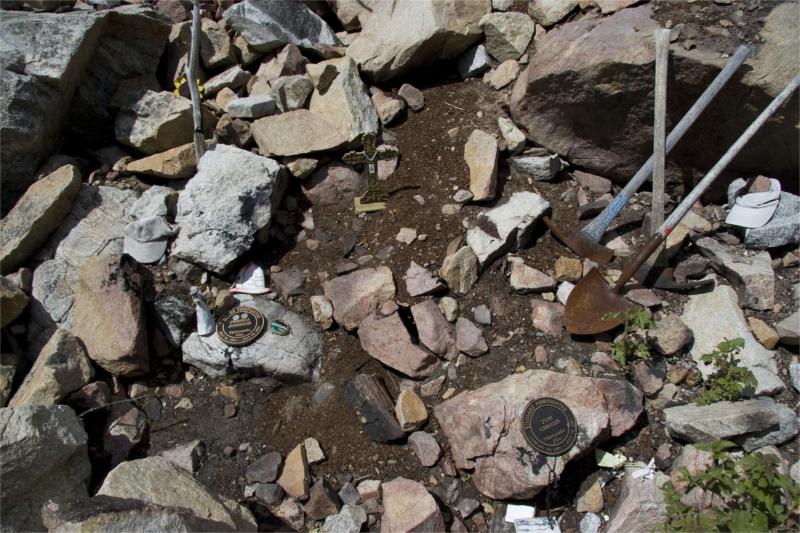 A few minutes after getting back in the car, we arrived at the trailhead. Not a single car in sight. Being a Sunday, we expected some other day hikers at least – but as we would find out – it probably wouldn't be the best day-hiking area. As we unpacked our bags – Nigel discovered that his platy nozzle had fallen off his hose and his bag was soaked. Always a fun start to the trip. 🙂 Should have listened..

At 3pm we were on the trail. It was hot – mid 90's. One missed-opportunity 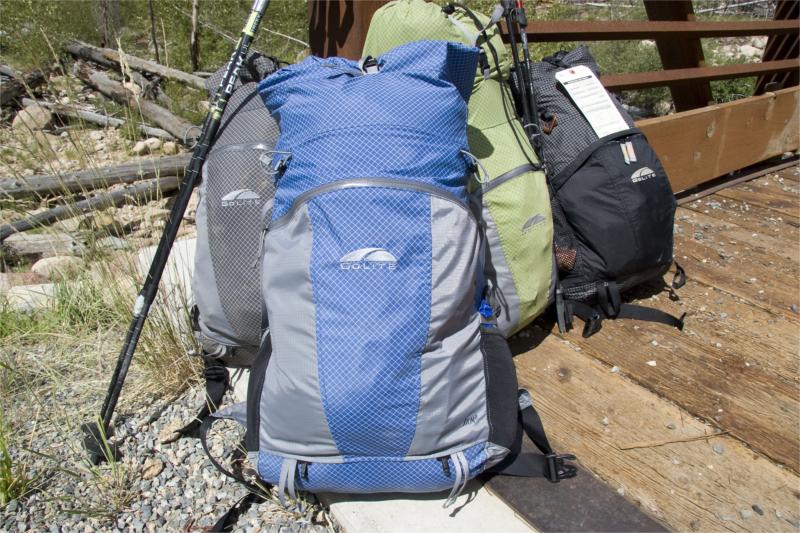 that we need to remember for next time is to not pack in water from home. Our water was warm after being in the car for 7 hrs, it would have been smart to fill up with cold water from the creek at the trailhead instead.

The trail crossed the Chewuch River on a sturdy iron bridge and starts out contouring the river. The goal today was to hike 6 miles to a Campsite near the Junction of Fire Creek Trail. 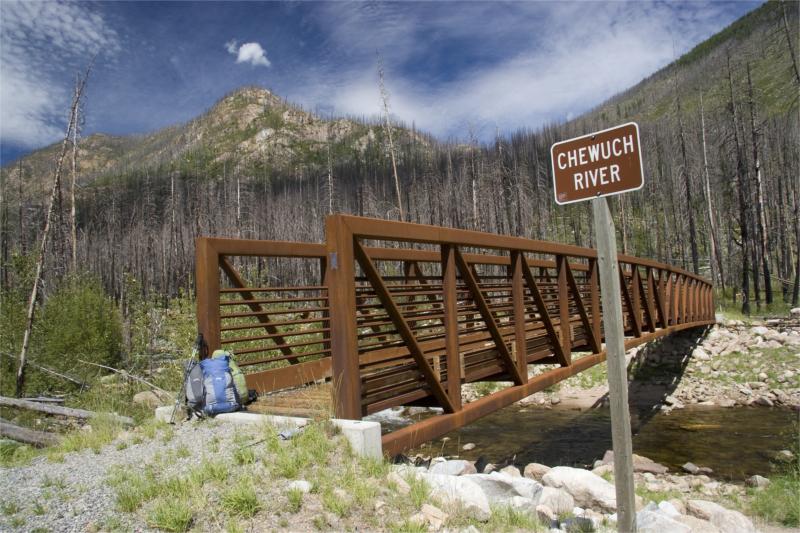 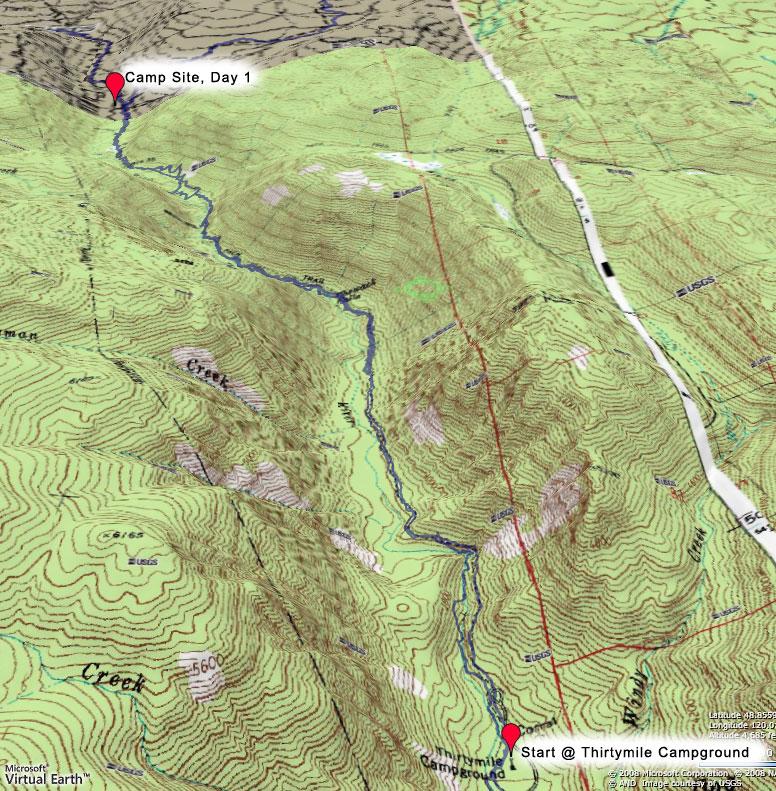 [It also shows our exact point of travel in blue (outbound and return) with the GPS tracking information taken from my Easy Showily device.]

The forest is no more here and only the charred trunks of trees remained. I kept thinking of those firefighters and what they experienced. As far as the eye could see there was hillside after hillside of burned-out forest.

After a little while we passed an old burnt-out sign – we tried hard but were unable to make out its old charred markings. 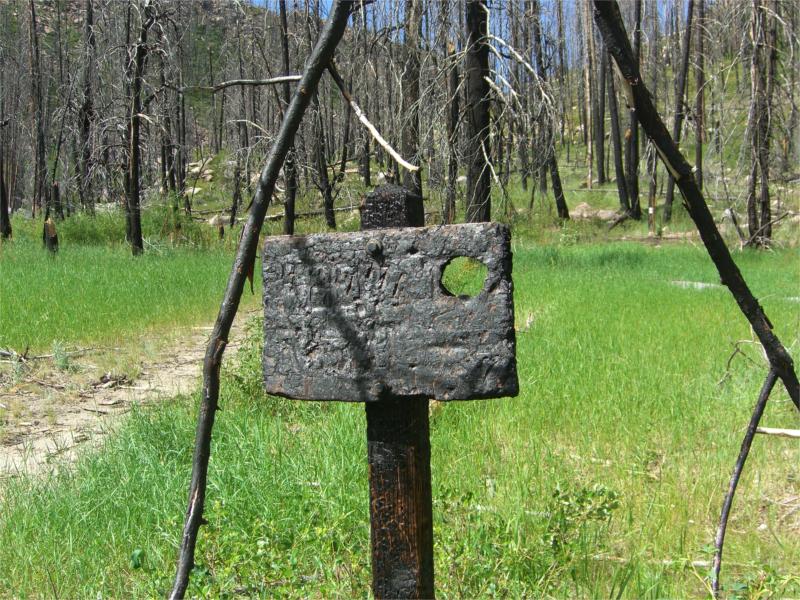 The trail was nice and wide (apparently an old stock route) and a flat to gentle grade. However, it was rough going in spots – there were lots of blow down and multi-tree clusters to scramble over. It clearly had not been maintained this year – and judging by the lack of broken-twigs on the trees that were down it probably doesn't receive much traffic. It was also hot without the shelter of green canopy overhead. 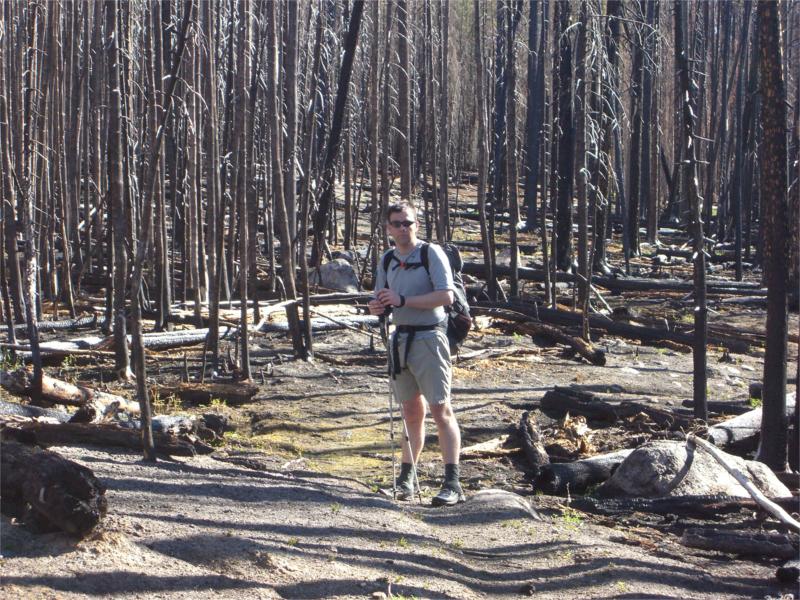 At first I felt great sadness for the burnt out forest we were in. Shadowed by the grounding tragedy of the lost firefighters – it felt like a terrible and destructive thing to have swept the area. The lack of wild-life and desolation was very apparent. We talked about the fire as we hiked and Tim shared some knowledge he had on forest fires – the way that the sap in the fir trees super-heats in the fire and spits out of the top of the trees spreading the fire quickly. The way that fir cones are normally closed but full of seeds – fire activates the cones, opens them up and disperses the seed on the forest floor. As we talked my mood changed and I began to see the great beauty and power of a natural forest fire. While temporarily damaging to the area, the fire is not devastating – but on the contrary – rejuvenating and cleansing. Natures way of re-balancing the ecosystem and putting nutrients back into the soil for the next generation of forest. I began to look at the burnt out forest with great admiration for natures amazing design.

Just before 5pm we arrived at a clearing before the Junction to fire creek trail. The area was beautiful – the burnt forest floor in this area was successfully rejuvenating itself and lush grasses were around. Against the back drop of the black trees and the deep blue sky it was a pretty area. 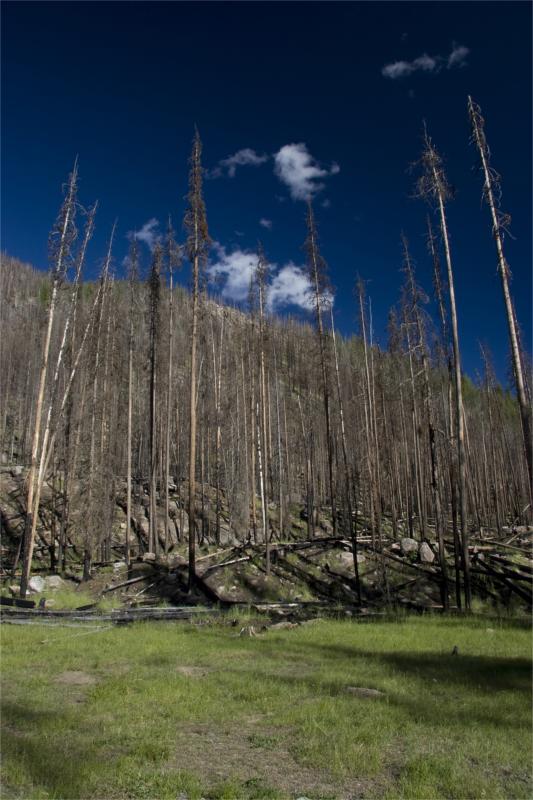 There were two camps in this spot – with lots of flat areas for more. It was still early, but we weren't sure of a better camp spot upstream so decided to stop here for the night. 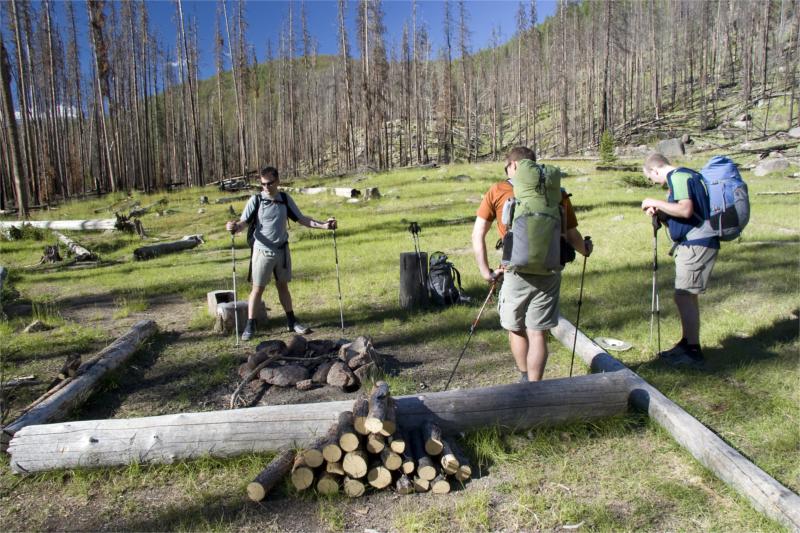 After we setup tents, treated water and ate dinner – around 8pm we saw a group of 3 guys come up from the same way we had. They stayed on the trail and marched past our site area headed for their destination. We wondered where they were heading and where they would camp for the night.

After futzing with hanging our food for some time (we found the *perfect* tree, but our cords were too short) we eventually found good spots and decided to hit the sack.

Nigel spent a little time staring at the Tarptent, with a kind of "I'm supposed to sleep in that thing?" look on his face – but eventually he caved and crawled inside. 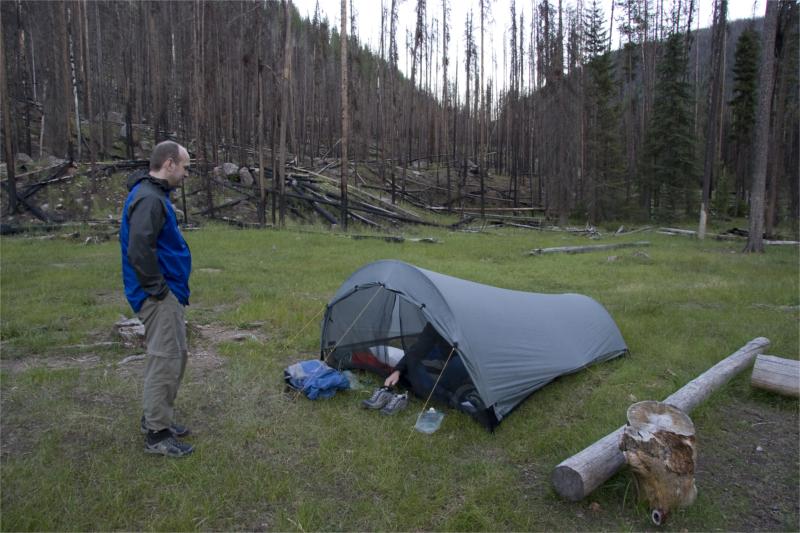 The bugs at this camp were minimal and didn't impact us at all, there was also great access to the nearby river for water.

Despite the roaring 95-degree temperatures at the trailhead – at night it got quite cold. It got down to about 38 degrees and I had to put on thermals and a hat to keep warm in my WM Highlite bag. Nigel brought a winter bag and was toasty-warm all night.