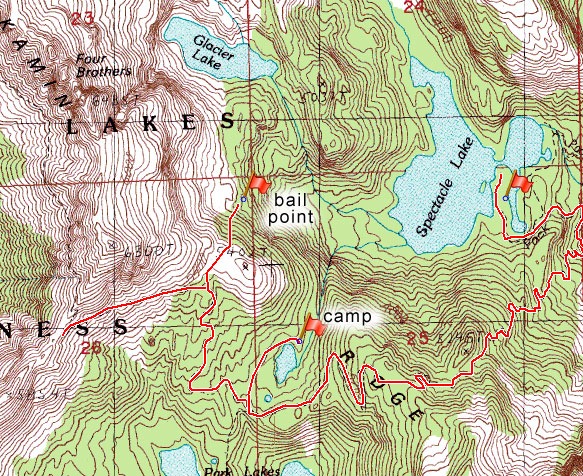 It's not often that during the night I cinch up the string of my sleeping bag hood to barely a pinch-hole. Last night was one of those nights, but not because of the freezing temperature, on the contrary, it was a warm and mild night. I was hunting for darkness – it was bright & sunny all night and the light was waking me up. Too sleepy to question the ridiculousness of my logic, I closed that hood and fell back to sleep. Next time I awoke it was 9:30 am. I can't recall ever sleeping in this late.

I got up and went to reclaim the food bag while Tim started boiling water. Not surprisingly the two other parties camped at the lake had already left. After a quick coffee and breakfast of cold granola and coconut milk we packed up the tarp tent, which had minimal condensation this morning.

Loo with a View

It's worth mentioning that the toilet at Spectacle Lake has probably one of the most spectacular views of any wilderness toilet. Here's my throne  picture for the day: 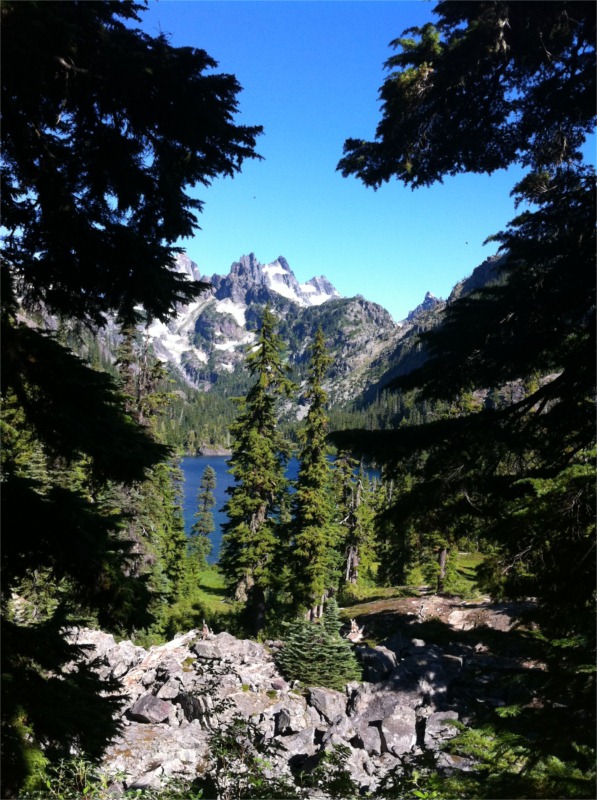 My only complaint, is that they didn't orient the toilet in the right direction to fully appreciate it.

Climbing up out of Spectacle we passed by one of the solo campers from last night. He was carrying a serious rack of camera gear, including a tripod that look like it weighed 20 lbs alone the irony of the situation is that a lot of it was crammed into a GoLite  backpack. He was probably hauling 40+ lbs in there. I hope he got some great shots.

We started the climb up to Park Lakes the views opened up to some very expansive Vistas. In the distance, a very prominent feature was Mt. Stuart. We tried to make our where Little Annapurna was in relation and guessed it to be on the left. Wrong. Tim whipped out his iPhone and used a nifty little application called Peak Finder; which uses the GPS and doesn't require a mobile signal. 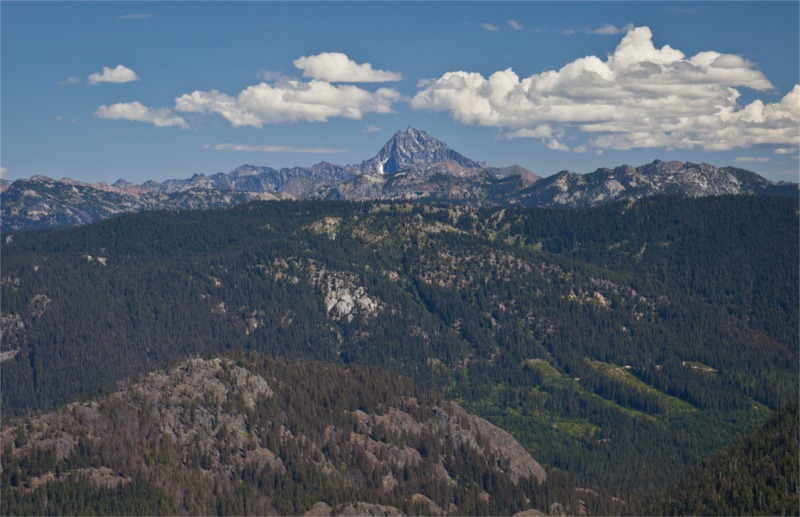 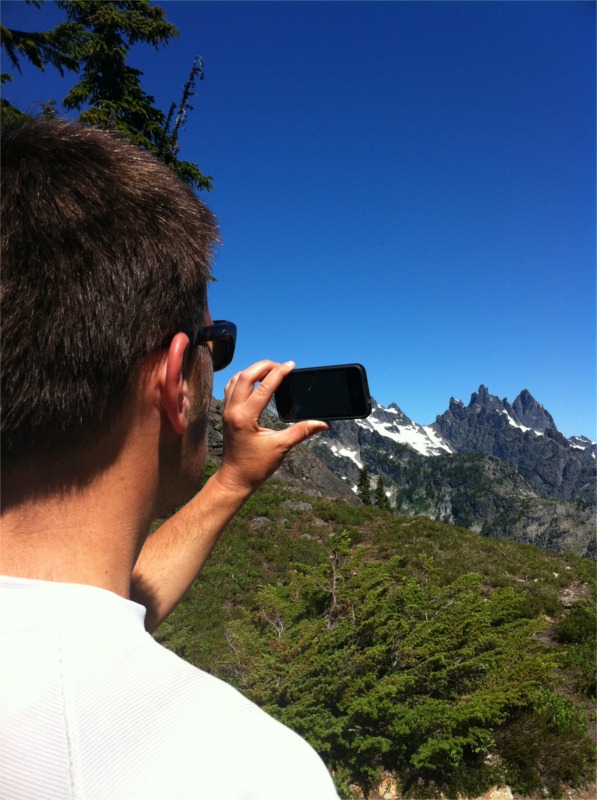 We quickly confirmed it to be on the right. Peak Finder was really fun, and we used it on a lot of the views.

We kept climbing and crossed a few minor snow patches on the trail. Passing an occupied horse camp on the way. 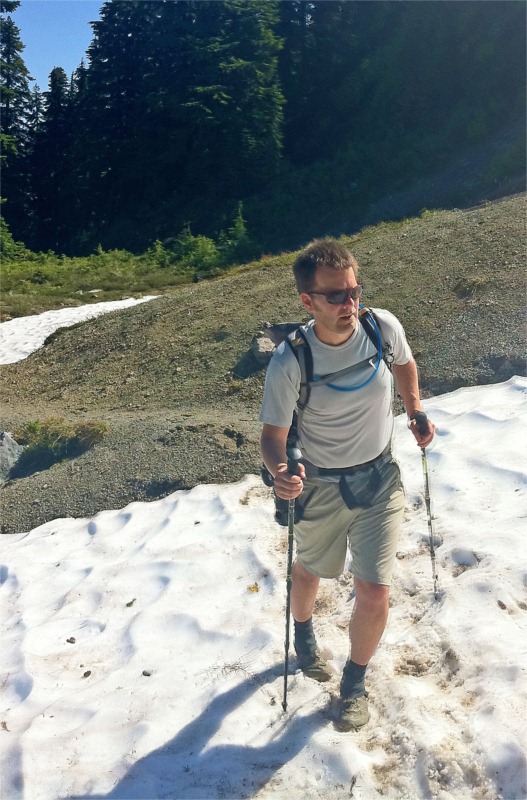 Our first stop for the day was to Park Lakes, we planned to spend the night there, and so were going to setup our tent and drop off a little gear before making the trek to Glacier Lake and beyond. We picked the smallest of the lakes, as it seemed nice and cozy and very swimmable should we get back in the early afternoon. 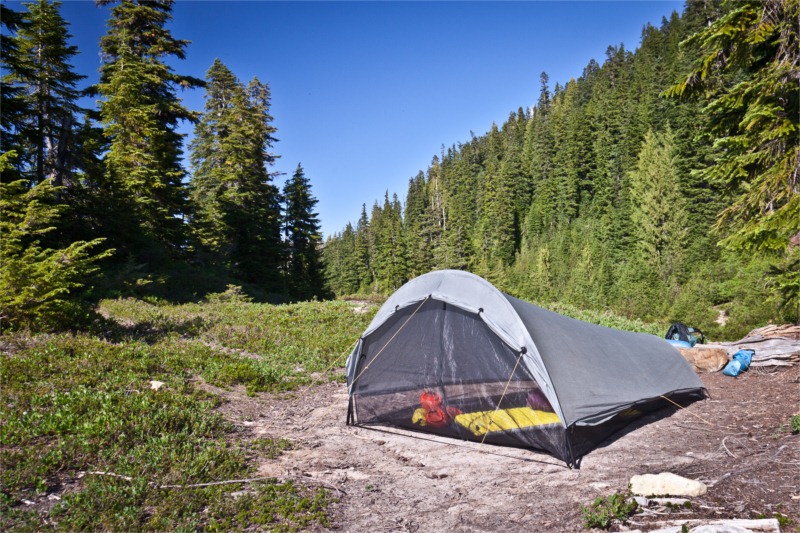 We we climbed higher on the PCT from Park Lakes the views kept getting more and more epic. Eventually we came across a junction with a smaller trail leading off in the direction of Glacier. 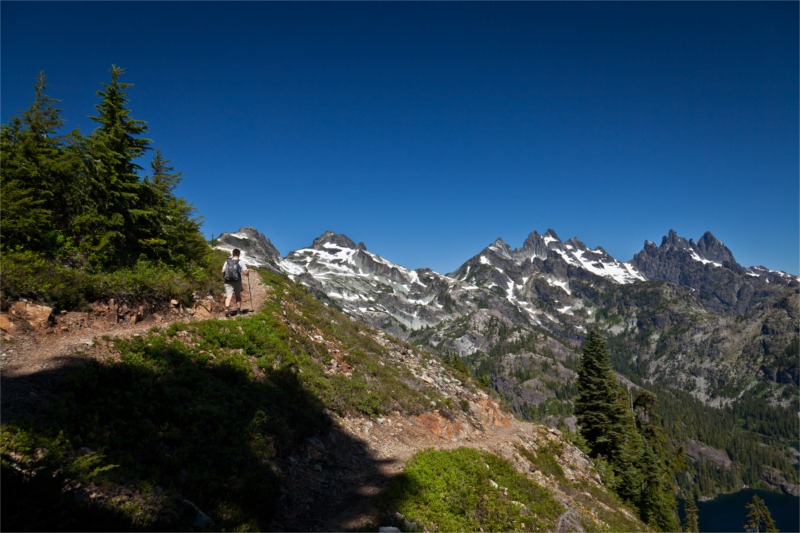 The trail climbed but was wet due to a stream more or less running down it. Patches of snow on the trail got more common as we crested the top. Down below us we could see the pretty looking Glacier Lake, complete with blue-glowing glacier off to the right. However, the trail down to it wasn't so easy. For a while the trail followed a steep gully with fairly good steps down, then we hit a large snow patch. The snow veered off – very steeply into the gully, it appeared to be the natural path, but the fall line took us right over a steep drop that we couldn't see the other side of. To take this path would be very foolish. Rather we traversed across the snow patch trying to get to bare ground to find an alternative route down. 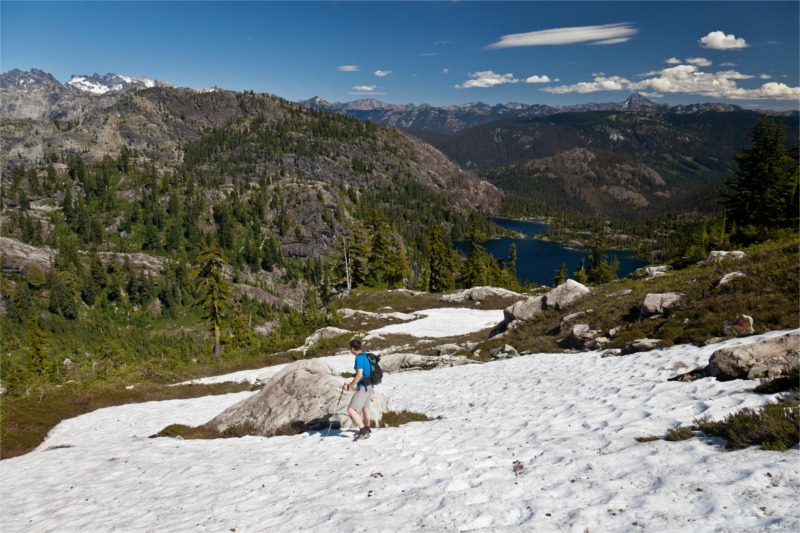 We made around to see where the trail was – but it was hard to spot, and appeared to be now a stream due to the quickly melting snow above it. Far below, we got a good view of the road ahead to Glacier Lake. It didn't look good. A large body of water with falls above it was melting out and creating the large waterfall we saw dropping into Spectacle Lake last night. The water was covered in snow bridges and it was unclear how safe a crossing would be. A fall through one of those bridges could be fatal. We debated for a while on how adventurous we were feeling and eventually decided to take the conservative option. We bailed on Glacier in favor of a hike higher up on the PCT. A lake's a lake, and Glacier would be there next season.

On the way back up the Gully, we ran into two backpackers going down to camp at Glacier. We gave them our trail beta and told them we were turning back, but they seemed adamant to try and alternative path down. They said last year they bushwhacked to Glacier all the way from Spectacle, which would have been quite the adventure. We wished them well.

Back at the junction, we turned left onto the PCT and hiked a series of long switchbacks in the hot sun. Tim took this fun Action  shot trying to blur my motion and keep the background steady. It ended up almost the opposite, but it's fun how it turned out. 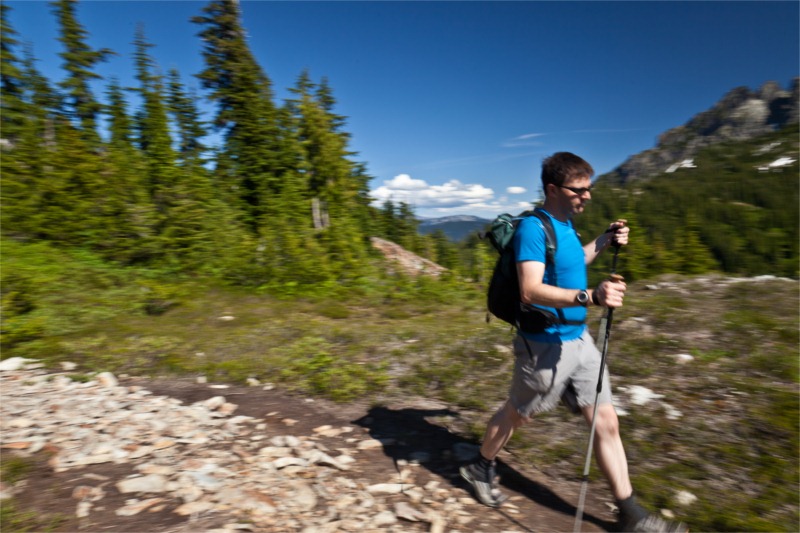 Eventually coming to a high point on a corner, our turn-around spot. The views were outstanding, down to Park Lakes on the left. 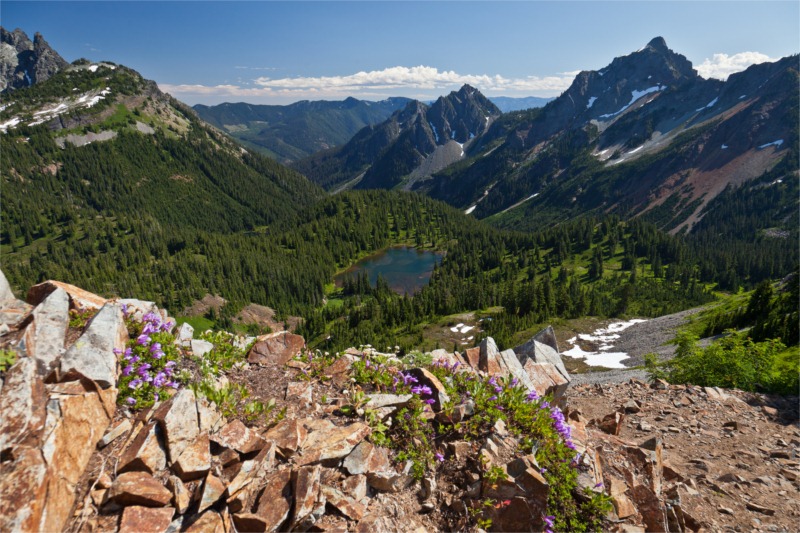 and meadow views to the right, where one could see the trail weaving around the mountainside towards Snoqualmie pass. We must have been only 5 or 6 miles from Kendall Katwalk. 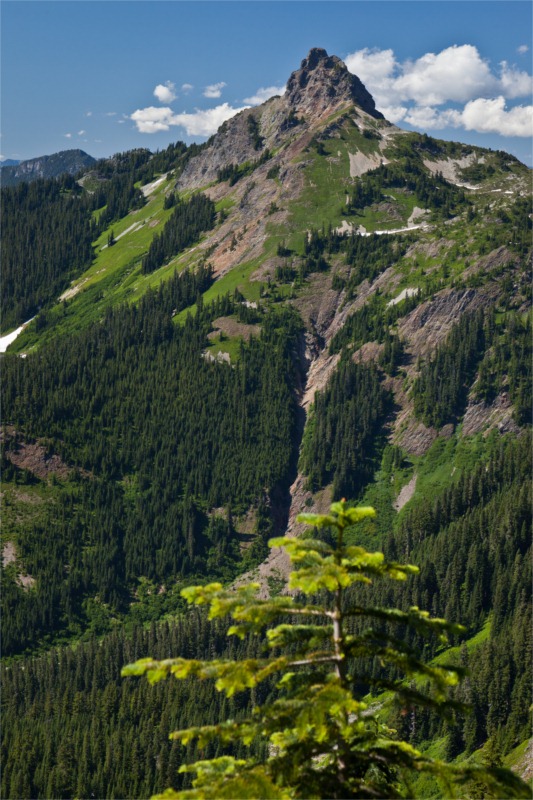 While playing with Peak Finder on his phone, Tim noticed he got a signal out here. I guess as the crow flies we were pretty close to I90, but it felt like a long way from civilization. I tried making a quick call to Theresa to say hello to the boys. Alas, voicemail. 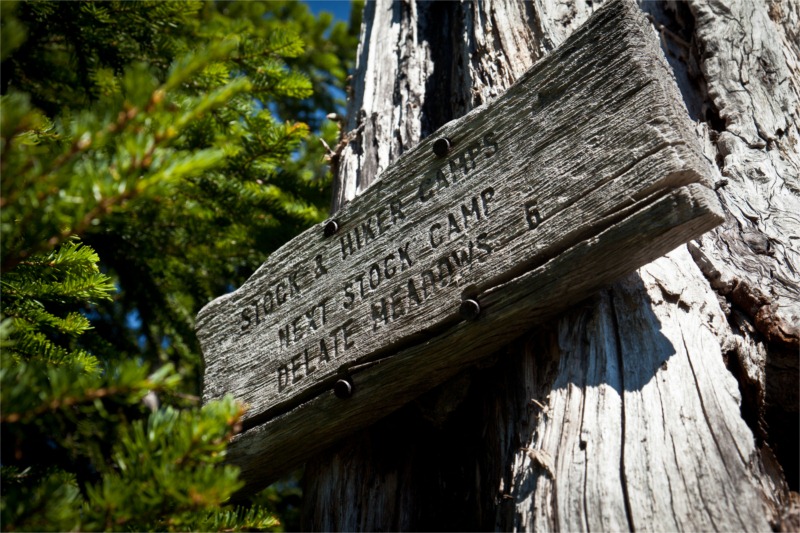 We turned around and tore back down the hill at a pretty quick pace. About half way down to the lake, we heard the roar of a fighter jet and looked up to see two of them upside down. Upside down? Yup they completed their barrel roll as they flew overhead. Fun little air-show, just for us.

Of course, you can't witness a barrel roll and not mention the legendary roll of a Boeing Jetliner during the 1955 Seattle Sea Fair. So we yakked about this for a while as we continued to few miles left to camp at Park Lakes. 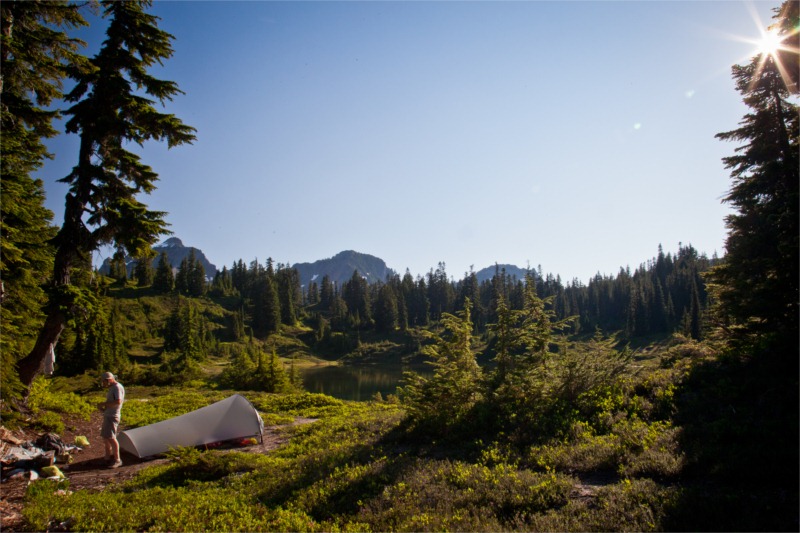 It was 3pm, which was a little early for bed, so we took a nice dip in the lake to cool off. Behind the lake was a beautiful copper colored stream which seemed to drain towards Spectacle. It was our source of water in camp. 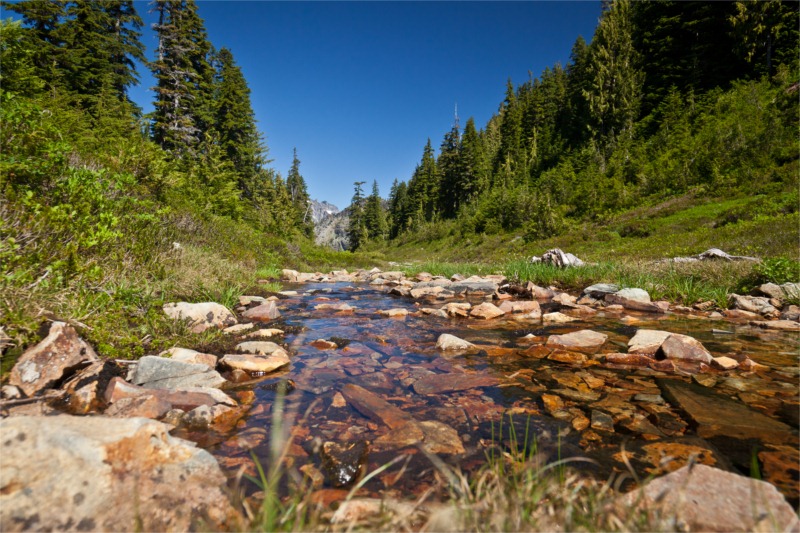 We ate an early dinner and hung the food. Admiring our almost text-book PCT-method  hang: 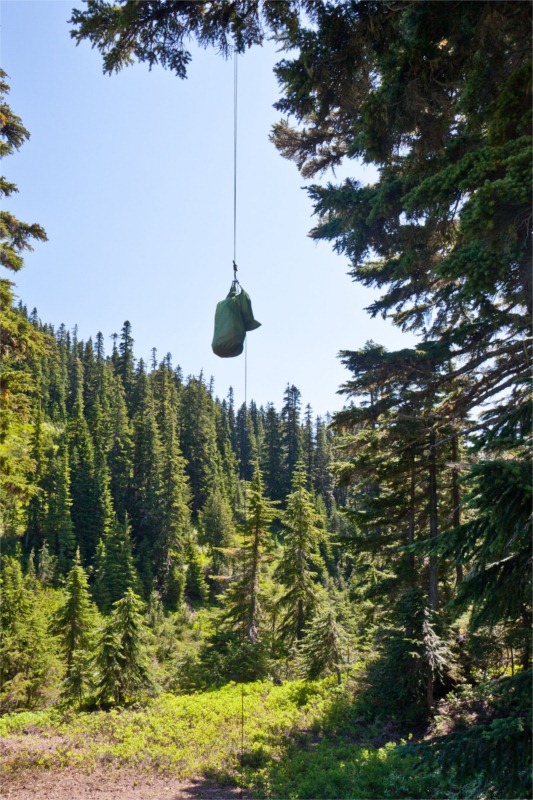 We spent the early evening wandering around and exploring the lake, and Tim took some amazing photo as the light turned. 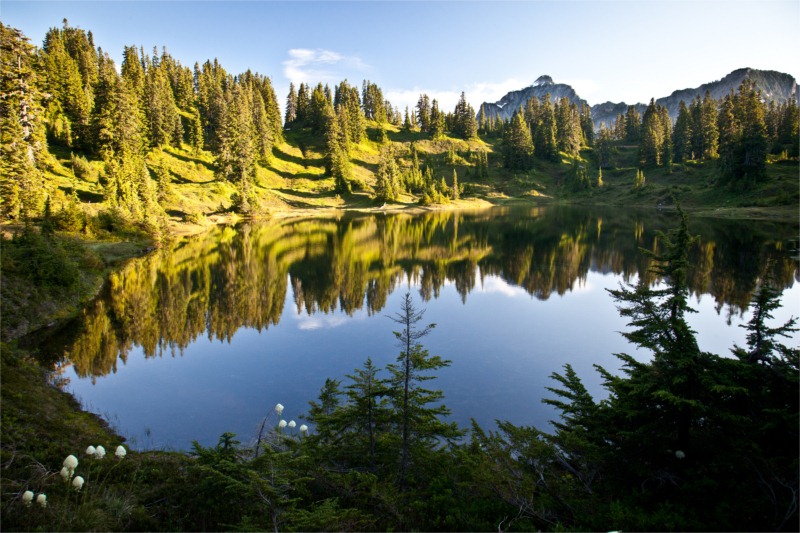 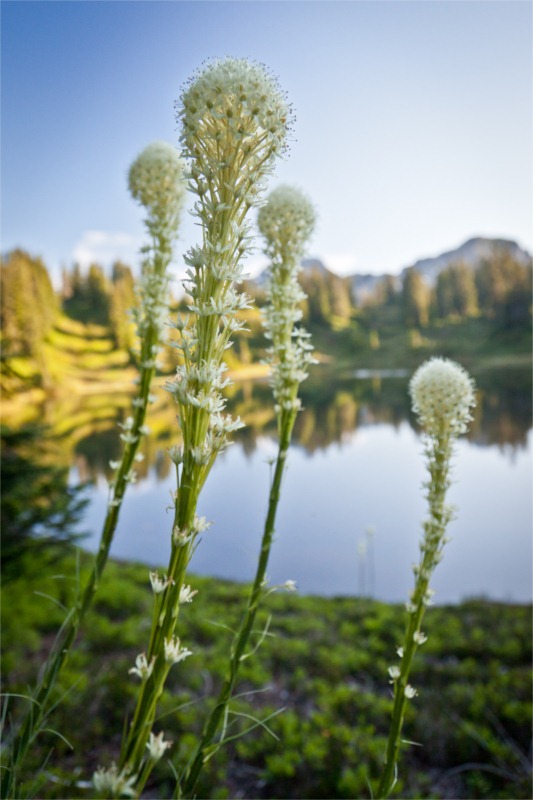 Around dusk the bugs turned nasty and we had to break out the head-nets. There were very large swarms of mosquitoes all over us, but as soon as the sun was down and the temperature dropped, they were almost non-existent.

I set my watch alarm for an early start – 6am – so we could burn most of the 13 miles out before lunch time.