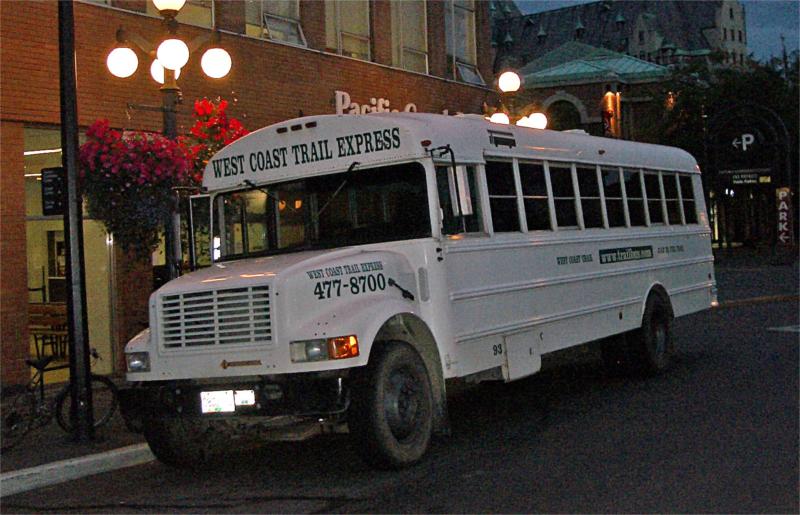 Our trip started early. We awoke at 5:45 am, took a quick shower and headed down to the bus depot at 700 Douglas St. to catch the 6:30am trail bus.

It seemed like a nice clear morning. We arrived at the bus and waited for others to load their packs to the driver at the back. Two girls were there discussing a “fuel issue” – they had forgot to bring fuel for their camp stove and were wondering if there were options on the way to the trail head. Fortunately, they had a stove that could run on gasoline so we were able to make a pit stop and get some on the way. They were hiking the shorter Juan de Fuca trail instead of the West Coast Trail. When we mentioned we were hiking the WCT they looked at us with great confusion – “then, how come our packs are so much bigger than yours?” … and so began a trend for the rest of the trip.

The bus ride was “entertaining”. The psychotic driver seemed to have a fondness for near-death experiences involving logging trucks. The drive to Port Renfrew (the start of our trip), was about 2hrs. We settled into our seats and tried to get back to sleep. 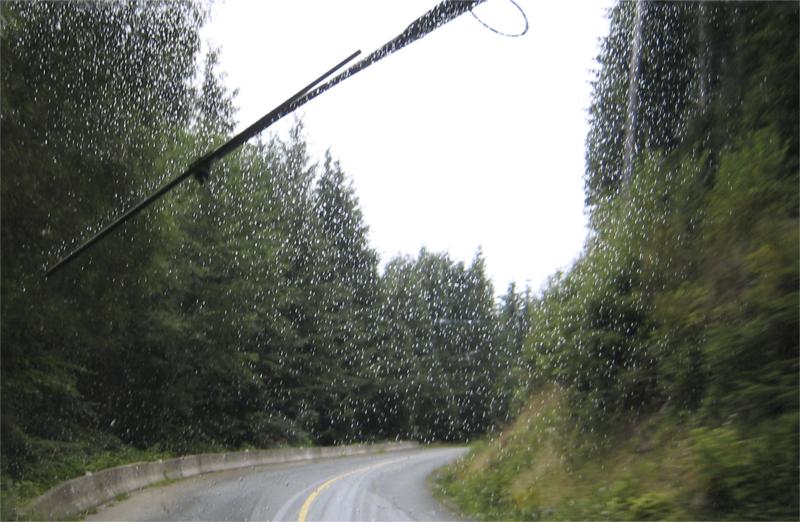 It looked nice and sunny in Victoria, and our forecast called for 2 mostly rain-free days before the heavy showers moved in for the week. Then… at about 8am our hearts sank and morale plummeted as rain started splashing on the windshield.

So much for those “blue sky” pre-trip dreams…. but this is the true WCT experience, right?

We arrived at the south trail head (Gordon river) at about 8:45 am. It was pouring by now. We grabbed our packs and headed for the shelter of the small ranger cabin where orientation would begin at 9am. After obtaining our permits, we sat through an hour and a half slide show by the nice ranger lady. She was a hoot and had obviously done this presentation before. 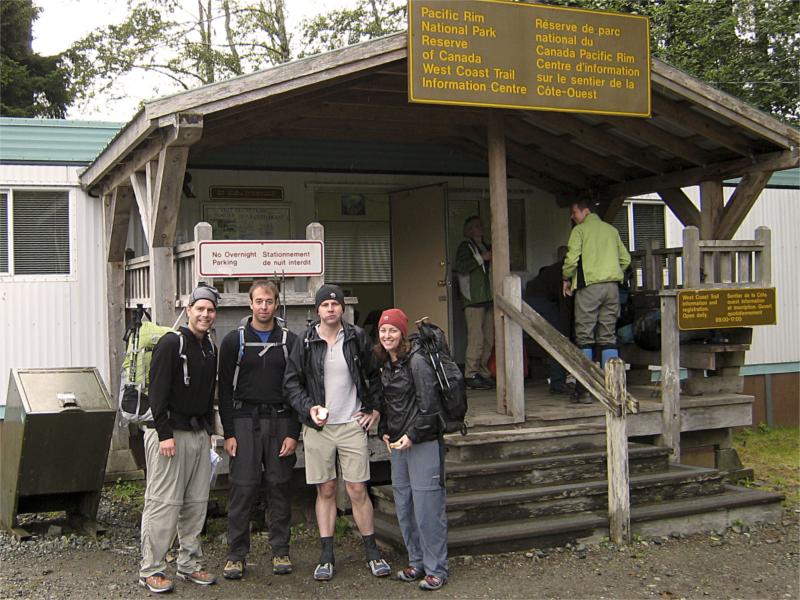 The orientation while interesting, covered a lot of things that you should already know if you have done your homework pre-planning for the West Coast Trail. “There are ladders, cable cars and mud”. How to deal with bears, wolves and cougars and spot their tracks. “Remember to pack out your trash and not litter our beaches with TP”. After hiking the trail – I wish more people took note here. I realize that it’s a well used trail but some of the camps were filthy – people left trash everywhere, fire pits had non-burnable things in them – like tin cans and aluminium foil. Firstly… who the heck brings a tin of anything on the West Coast Trail? … and secondly to be dumb enough to think you can burn it… don’t get me started.

We learned some other great info – like which parts of the trail were in bad shape, or where the most recent bear/cougar sightings or wasp nests were. For instance, we were told that we could not camp at Cheewat camp – a bear was very active in the area and they were asking for a voluntary ban.

My favourite piece of advise from the ranger was “make sure you LOOK UP often.” It sounds so obvious, but the WCT has such treacherous footings that you spend a lot of time looking at your feet and where they are going rather than noticing the tops of the enormous old growths you are walking among.

About 10:45 – fifteen minutes before the ferry was leaving, I peaked outside the cabin and the rain looked like it had stopped. Score! Morale rocketed back up to an all-time high with the possibility of starting in dry weather and the excitement of getting going.

After the orientation – we tucked into our lunch – peanut butter & jelly sandwiches and fresh apples. Easier to carry them in the belly than on the back.

We walked a few hundred yards down the road and quickly arrived at Butch’s ferry crossing. “Ferry” was the name for a small power boat with a draw-bridge like front. Getting off the boat felt like storming the beaches of Normandy – except without the German bullets coming our way.

At about 11:30am we took our first step on the infamous West Coast Trail. We took out our hiking poles and prepared ourselves for a knarly journey. Just two hundred yards in and it was confirmed – mud & roots. Lots of both, less of the “trail” part.

After about 1/4 mile, we passed a solo hiker coming out. He looked filthy and utterly exhausted. He grunted at us as he stormed by. Is this really what the West Coast Trail will do to us? We will be like this coming out the other end? 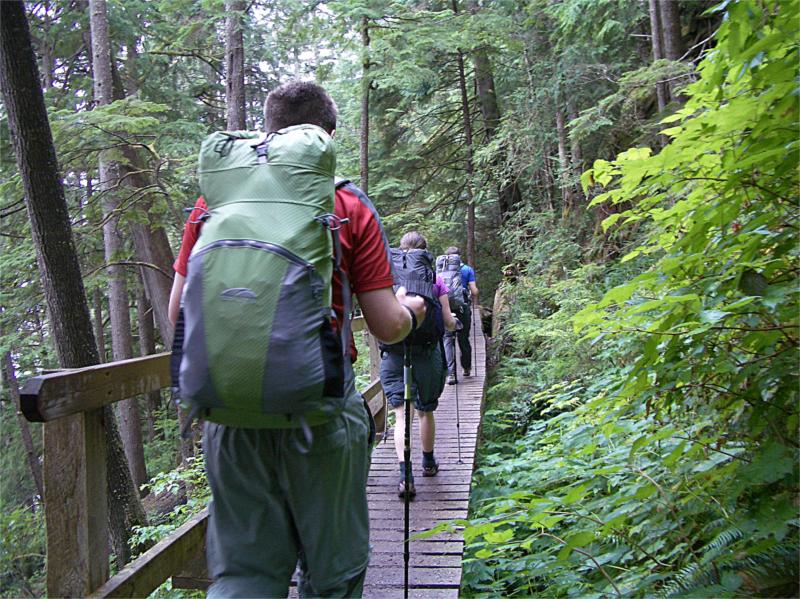 One of the first things that stuck me on this section of the trail – is how unusual it was to be walking (seemingly deep) in the woods with the sound of ocean waves crashing onto the shore. It was a refreshing change to marmot whistles in the distance.

We arrived at the donkey engine at around 1pm [KM 72]. The climb up there seemed to go really fast – this is close to the highest point on the West Coast Trail – which really isn’t very high. The donkey engine was an old rusted out engine that was used to haul huge logs around during the construction of the trail. The size of the engine and the weight and length of the huge cables it used made me wonder about the feat of engineering it would have been to get this stuff out here in the early 1900s. It turns out that the engine hauled itself up there from the beach!!

We ate a very quick lunch at the donkey engine – and caught up with another group of 4 that were moving fast ahead of us. Tim and Bill were new to the ultralight thing – this would be their first adventure. As we ate lunch I mused to myself that the group of four in front were sitting on their heavy packs looking tired and Bill and Tim were just standing around with their packs on, bouncing with energy and munching from a bag of gorp. Hopefully this was an early indicator of a great experience that lay ahead for them – not cursing me for convincing them to bring an umbrella and trail runners. 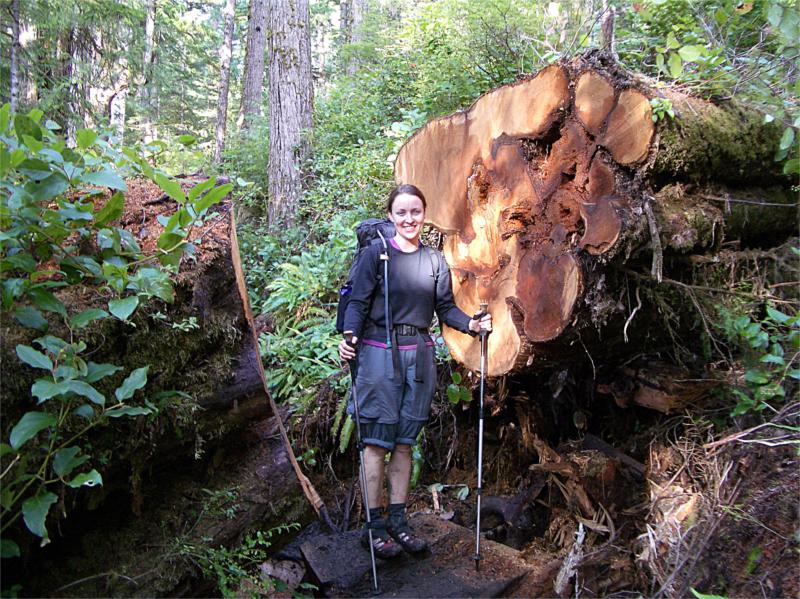 We started hiking again, and after another couple of hours came across a junction [KM 70]. Surely this can’t be Thrasher already? It was about 3pm and we weren’t ready for bed yet! We took a quick group poll and decided to push on all the way to Camper for the first night. This was a tough call, as it meant that we would miss out on Owen Point. We couldn’t take on Owen Point today as the tide was too high already and the weather forecast called for heavy rain starting starting on day 3 – so if we break camper tomorrow – we could probably get clear of the hardest part of the West Coast Trail before the rains come. 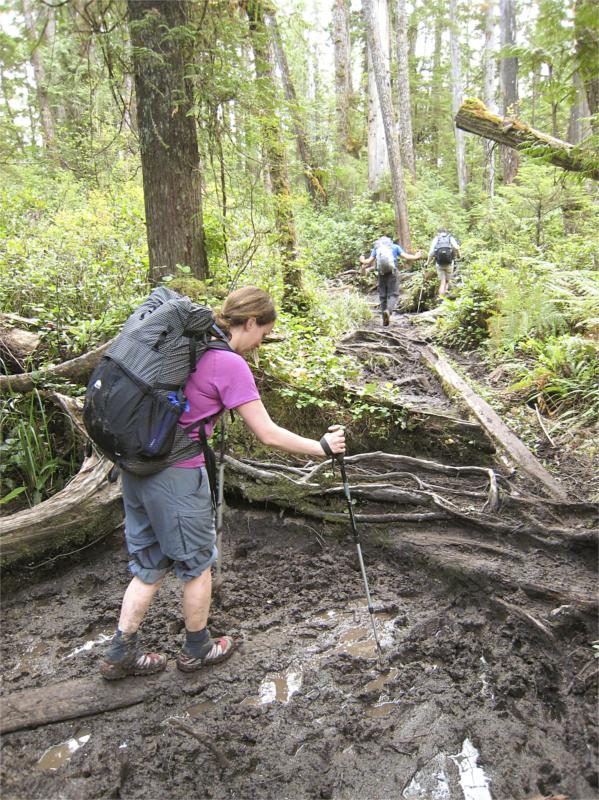 From Thrasher we stayed on the forest trail, which was “more of the same”. Full on, thick tree roots and big mud puddles. Once nice advantage to being ultralight here was that with our poles and light weight trail shoes we were able to easily navigate around or jump over some of the larger mud pits without need to get our feet wet or muddy. Traditional hikers we saw coming the other way were so encumbered that their approach was to simply wade though the mud pits head-on with their heavy leather boots and gaiters. 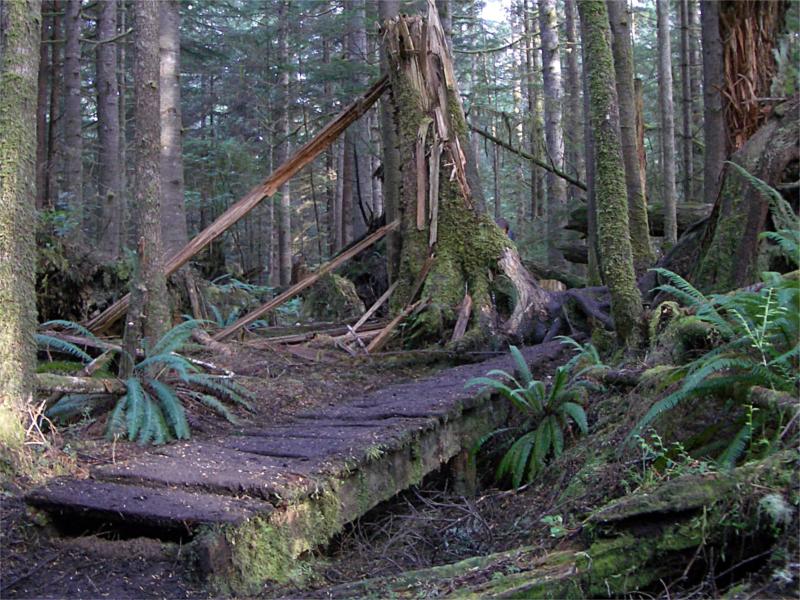 I did wonder several times, which technique was better. In many ways it seemed like our speed was hindered by being so intentional with every step and having to find routes around the mud. It seemed that the more direct approach would have made better time on this section of trail. However, I was sure glad to have warm dry feet and our energy and morale stayed very high for the first day.

In between the mud patches were occasional sections of wooden boardwalk. The old boardwalk, while rickety and rotting in many places tended to be a lot safer to walk on that some of the newer sections that were slippery – especially in the rain.

As we slogged through the mud-trail, a constant point of conversation was “there’s no way some dude RAN this in a single day“.

In touch with the Ocean

We descended from the forest at around KM 66 onto the first beach access. It was great to finally see the beach and some coastline and be out of the forest. We could not hike along the beach here, as the tide was too high, but we stopped for a while and hung out in the sun and ate a little more food. 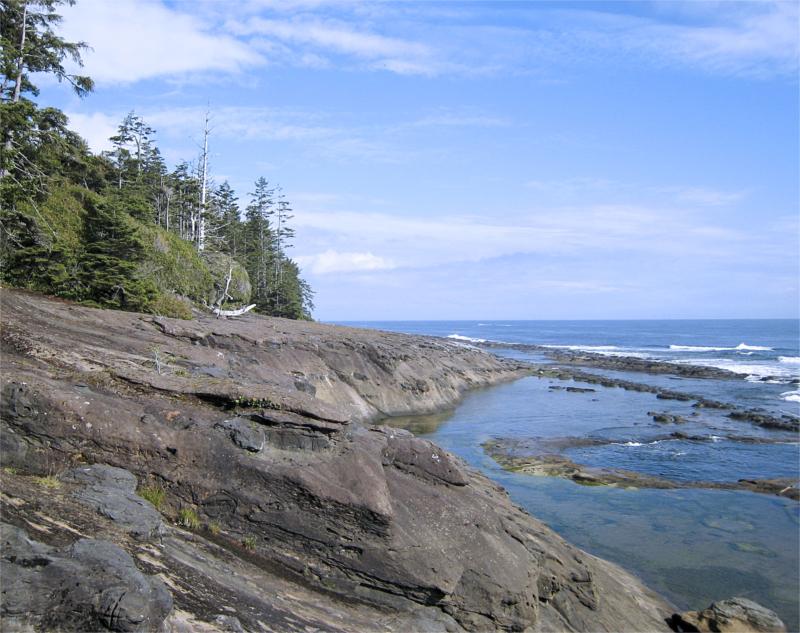 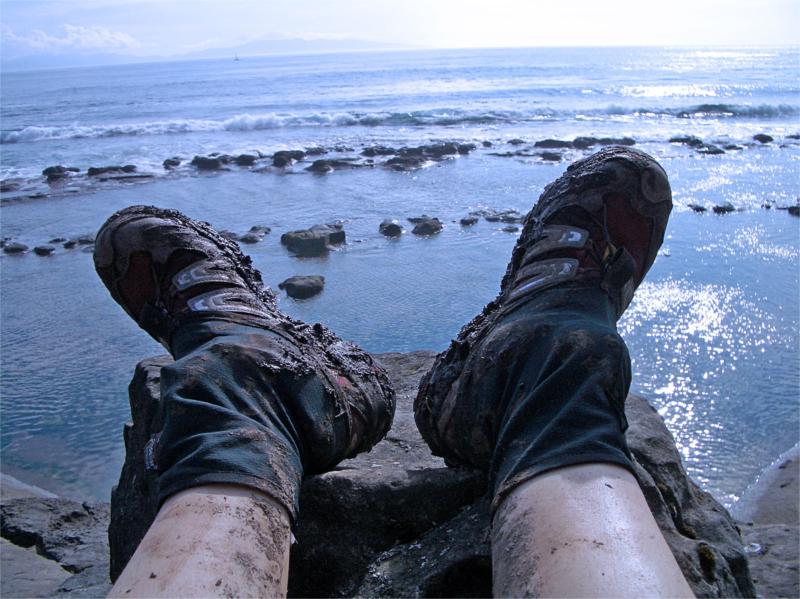 Getting close to camper the frequency of ladders seemed to increase. 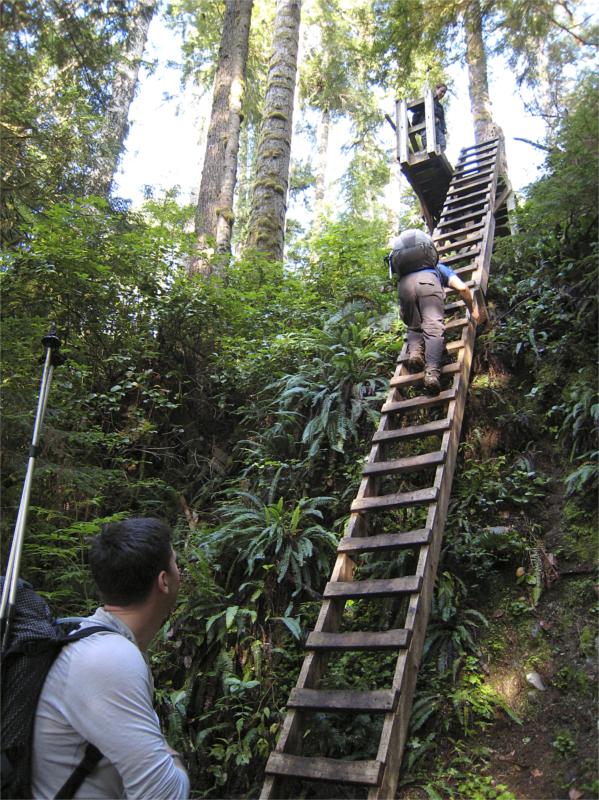 The ladders were so much fun. I was sort of dreading them – as a lot of sites I have read people talk about them as such a burden. However, I didn’t find them difficult at all. They were really fun to climb up and down an a real novelty compared to normal trails. I also admired at what a brilliant idea they were for this trail. They are an excellent way to climb a lot of elevation fast without slogging at a long set of switchbacks. Very few of the ladders we encountered were completely vertical – most were sloped in some way – between 50 and 70 degrees maybe. I suspect it’s a very different experience if you are carrying more than 20lbs on your back.

The next 4km went by quickly and around 6pm we arrived at Camper – KM 62. We encountered our first cable car crossing at Camper. 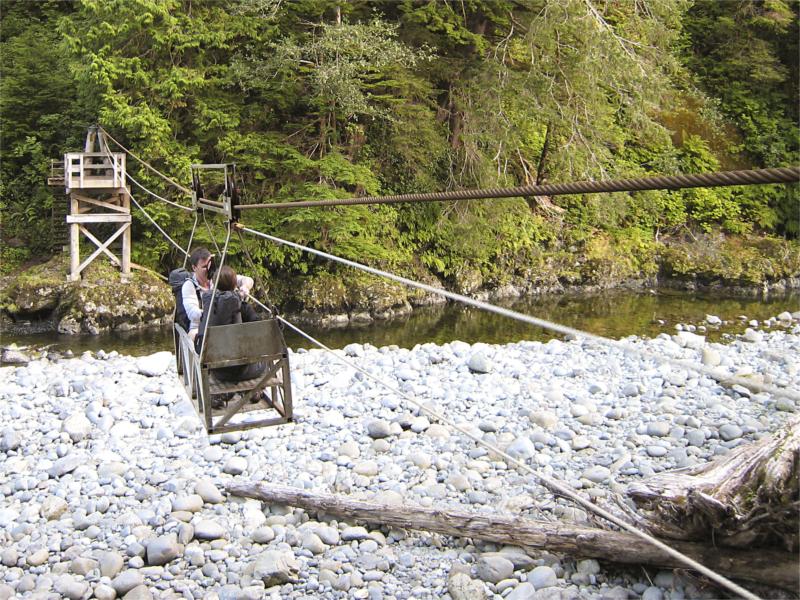 The creek didn’t look that bad – so Theresa and I went to wade it. Tim & Bill were just too excited to see the cable car and before we reached the bank of the creek we heard them whizzing across with a big “wooohoooo”. We turned back and took the cable car too – it seemed too much to resist.

Arriving at Camper was a little odd for me. We were the last group to arrive that night and there were a lot of folks already there. We counted about 18 different tents. Everyone was camped along the forest – all bunched up in a line. We couldn’t tell if they were there to reduce their exposure – or if they knew something we didn’t. Perhaps the tide comes up here or that the creek flooding was a possibility?

The odd part was that everyone seemed to be out of it and exhausted. I was reminded of scenes from 28 days later. It felt like we had lots of eyes on us as we rolled in and figured out where we would put our tents. We picked a spot on the open beach, setup our tents, fired up the stove and tucked into a nice hot meal. After dinner we crossed the creek to watch the ocean as the light faded. 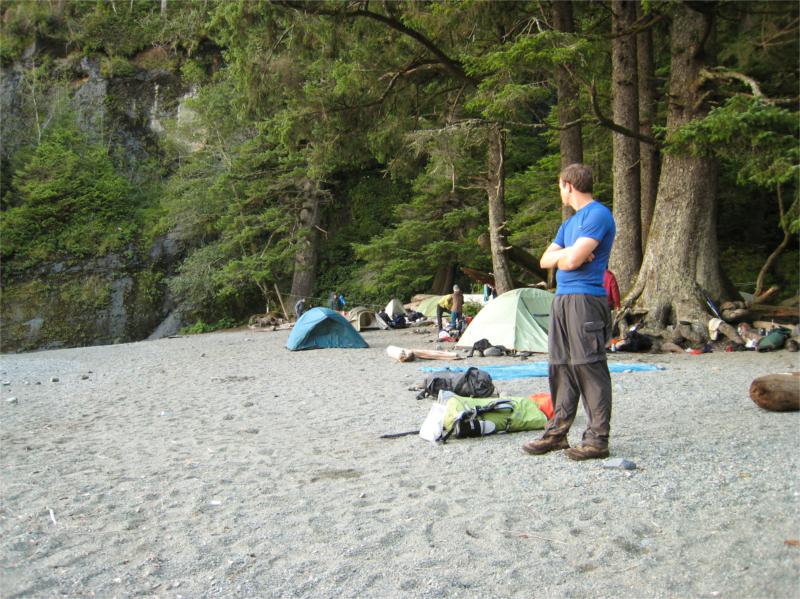 As we saw bear-boxes on the way into camp, we didn’t bother to hang a bear rope. However, once we had separated our food and the light had gone, we found the bear boxes to be jam packed. We tried getting a rope up by flashlight but the trees weren’t great. Tim saved the day and jammed all our stuff into the bear boxes and called it done.

We crawled into our tents and got some sleep, excited to learn what tomorrow would bring.