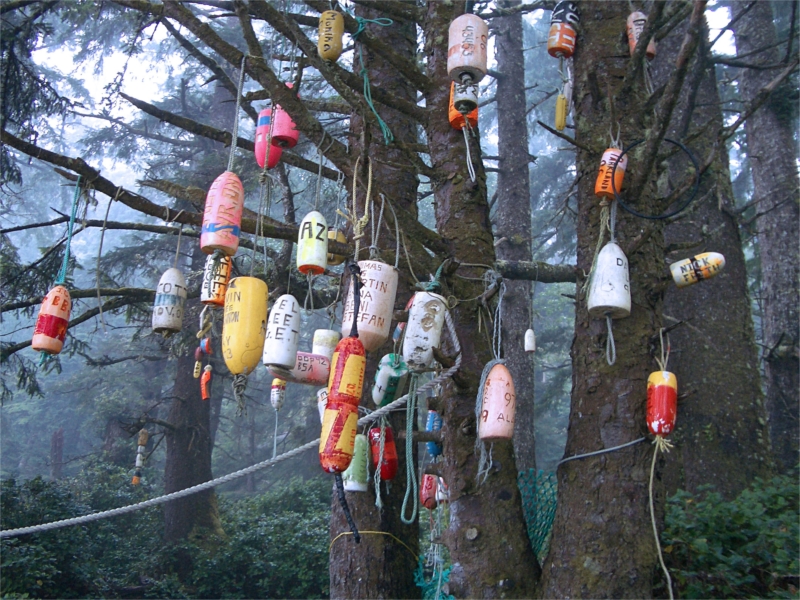 A Quick Stroll Around Green Lake.

15 minutes later, and Theresa caved in. We were up and about camp for an early start, and the skies were indeed blue.

We ate a good breakfast, some nice hot coffee, packed up our bags for the last time and were on the trail by 7:30am. Last last 12 km – "a quick walk around green lake", right?

One thing I have certainly learned in life is that things don't always work out the way you expect. And the conditions of this section of the trail were far from our expectations.

We had a deadline today, but not too ominous of one. We needed to be at the trail head for 1pm – to catch the Trail Bus home. We were a day ahead of schedule and so hoped that there would be room as our reservation was for tomorrow. 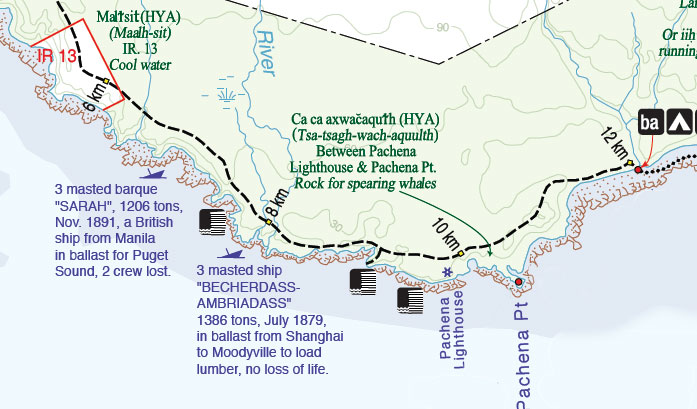 We figured it would take us at most – 3 hours to cover these quick 12 km – word on the street has it that the first 12 km to the lighthouse is a 3 meter-wide trail – or more of an old logging road. Leaving Michigan did not corroborate this story. It was yet more & and mud, roots & mud, more roots & mud. 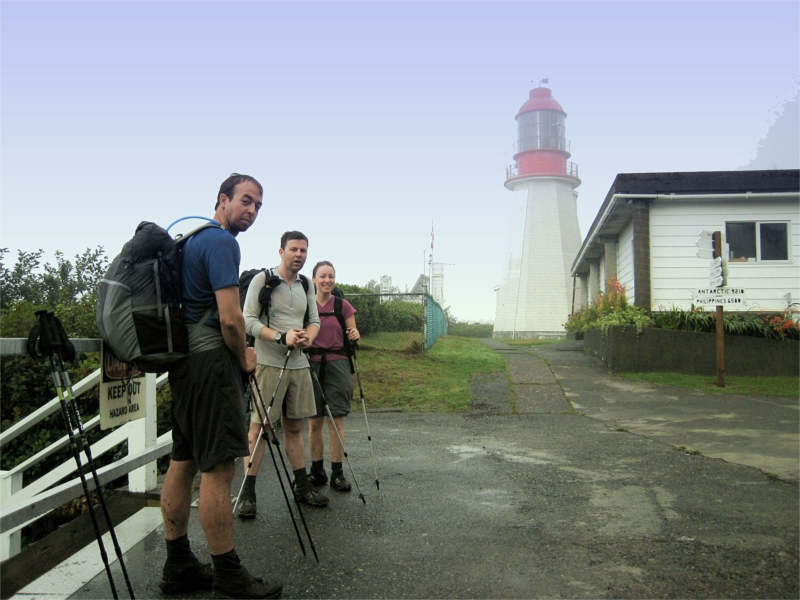 We made decent time though, and at around 8:20am arrived at Pachena Lighthouse.

We took a quick stop here, and tried to be as quiet as field mice. It was, after all, 8am in the morning, and if the lighthouse keepers had any sense – they would be tucked up in bed.

The trail between the lighthouse and the trail head was especially uneventful. It flattened out in sections into decent trail, but was surprisingly difficult still for its description.

One nice thing about going S->N is that the kilometer markers are counting down to zero – which made for a fun reminder as we hiked. 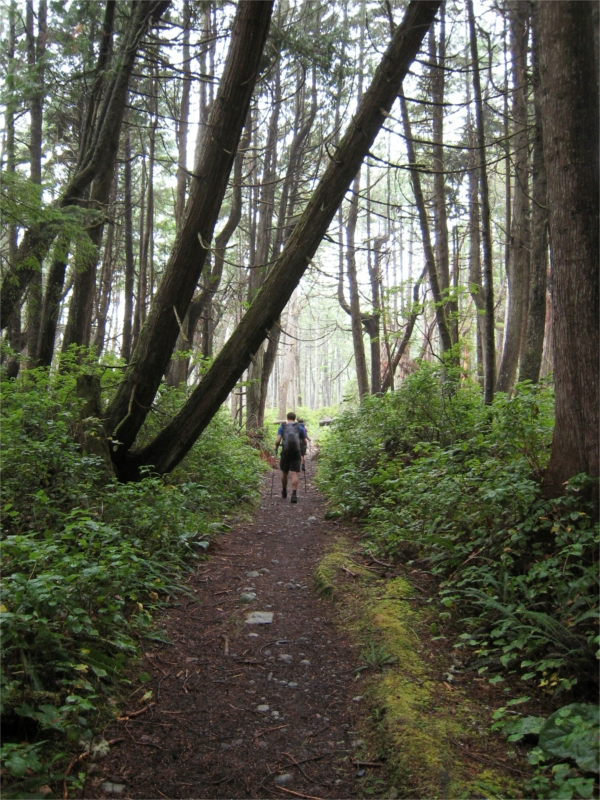 Although uneventful, the forest through this section was very pretty. There was a lot fog hanging in the trees and we could hear growling bears between them. Oh wait – no – that's the sea lions on the beach growling- never mind.

One-by-one, we counted down the bridges. We also passed four or five groups on the way out – and we thought that *we* had an early start!!

At around 11:10am, we arrived at the trail head. Jubilant for our successful journey and hopeful that there would be room on the bus. 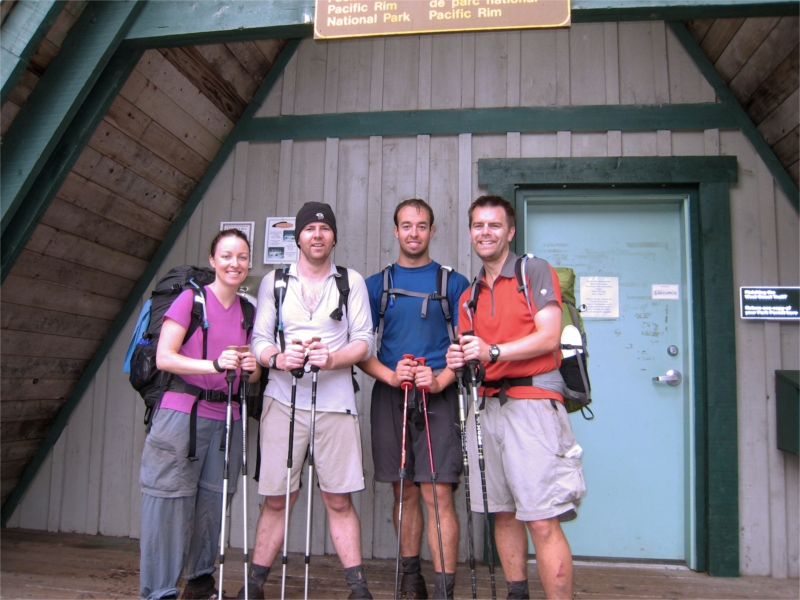 There was a pay phone at the office at the end, and we called trail bus. Bad news – there was no room.

We huddled down and made some coffee and tried to figure out a game plan.

Tip: When your titanium cook pot has a glowing-red handle, don't pick it up with the sleeve of your polypropylene (recycled plastic) shirt. It hurts and makes quite a molten mess.

Around noon, the bus driver showed up – we asked if he had room – and he said he would squeeze us in. Jackpot! Back to Victoria we go.

Another group of four also were out early and he managed to squeeze all eight of us in and get us all the way back to Victoria. It was a long bus ride home – over six hours. 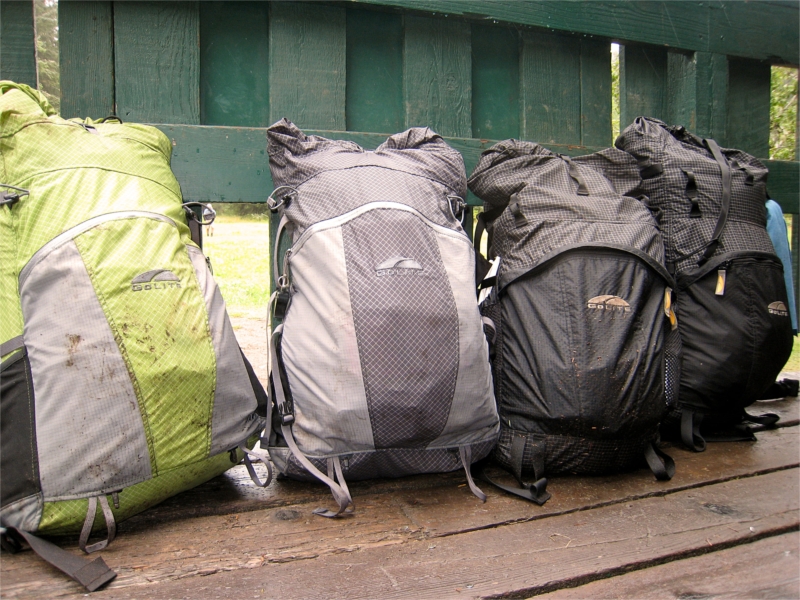 We hopped off the truck and made our way back to the QV hotel. Cleaned up and headed over to Rics for a big juicy steak.

The next day, we had a hard time changing our float-plane reservation to Seattle – as most of the early planes were grounded due to fog. However, the fog lifted and the folks at Kenmore Air went above and beyond and sent a plane out just for us.

In a little over 45 minutes – we were back in Seattle with a whole new set of life experiences and great memories to tuck away. 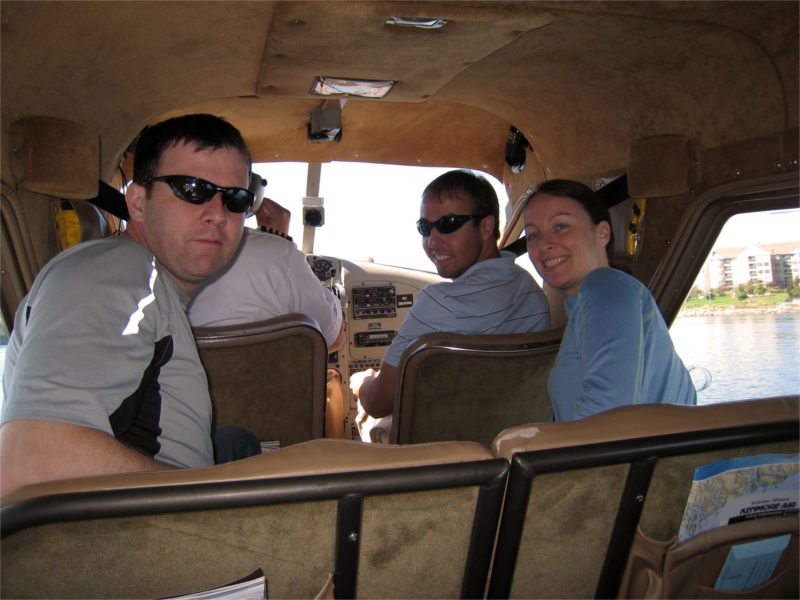 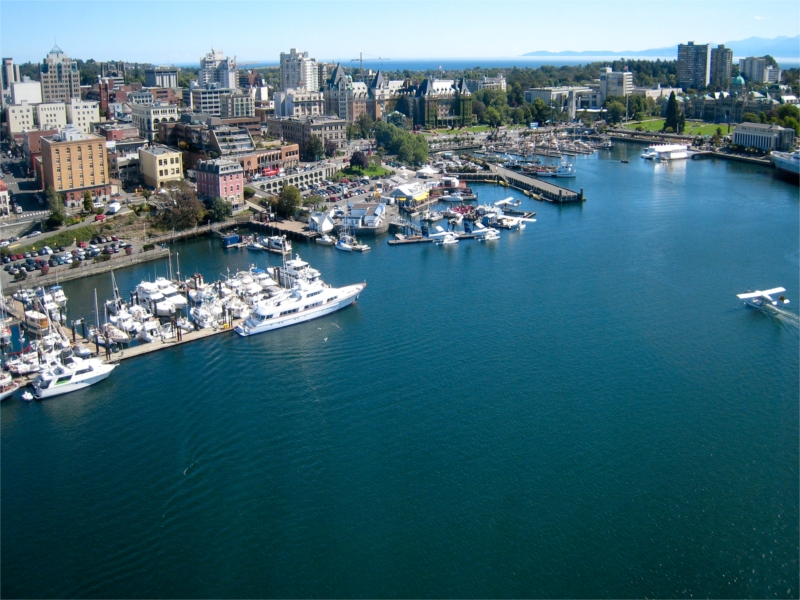