Permit Info: An advanced permit/reservation is required, although a limited number of permits are reserved for walk-ins. Applications can be made around mid-march each year. Permit information here.

Getting There: There are several routes into Mount Rainier National Park. Depending on where you decide to start your trip – you should figure out which ranger station you plan to pick up your permit from. A permit reservation letter will be mailed to you before your start, but you need to use this to pick up your permit before 10am on the start of your hike, otherwise your slots will be given away to walk-ins. 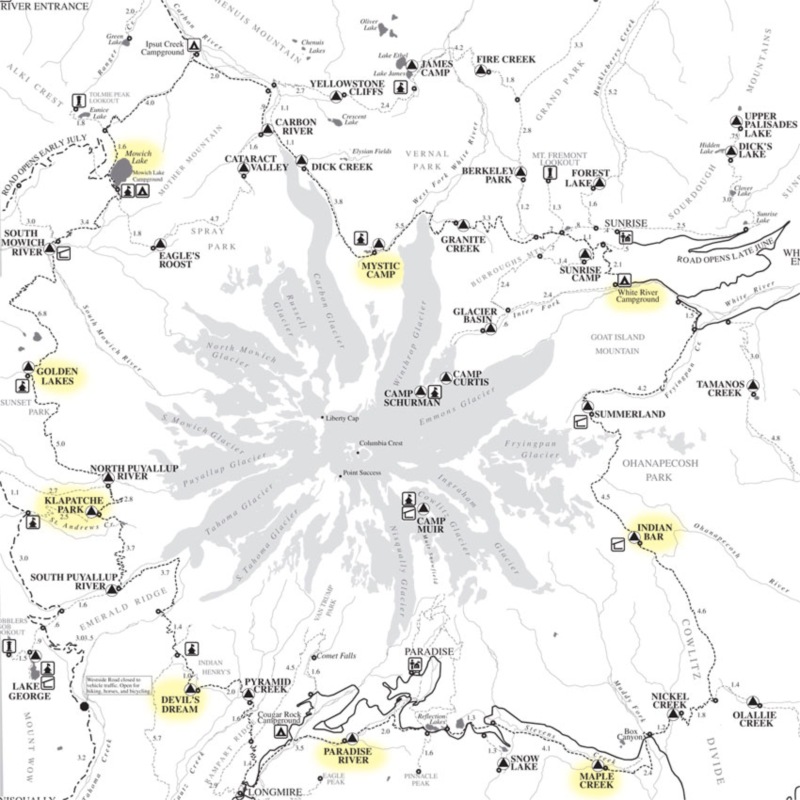 For this trip – we had a group of four – Nigel, Tim, Dave and myself. Tim, Nige and I did the Pasayten together last year and since then Nige completed the TGO in Scotland to hone his Ultralight skills (Or develop some contraband habits as we'll discover later ). Tim was a good sport spending a week with three brits. Dave was the newcomer and showed up to Nigel's house the day before with a five pound sleeping bag that more or less filled the entire Jam backpack Nigel lent him. Fortunately, Nigel has a gear surplus and was able to kit him out to be in the ballpark. Our start packs with 5 days of food and full water, weighed in at 23lbs (Brett), 25lbs (Nigel) 26 lbs (Tim), and 27 lbs (Dave). Dave scoffed at our running shoes and opted for more sturdy boots without poles as he had a shoulder injury and didn't want to impact it too much. 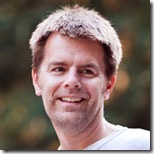 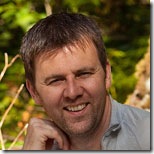 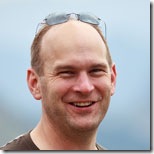 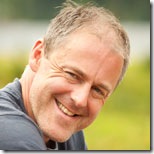 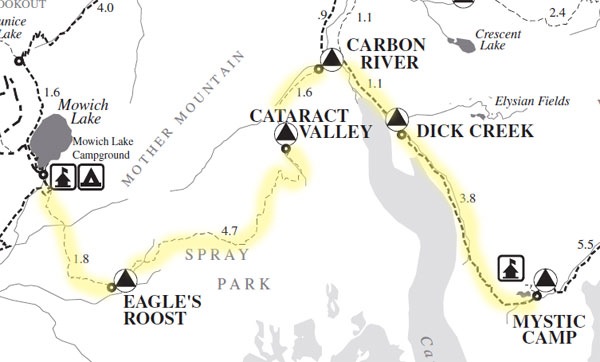 Day 1 started with a 7:15am departure from Seattle. We headed to the Carbon River ranger station in order to exchange our reservation letter for a trail permit. We arrived at the Ranger Station around 9:15 and asked for any trail beta. The ranger said the 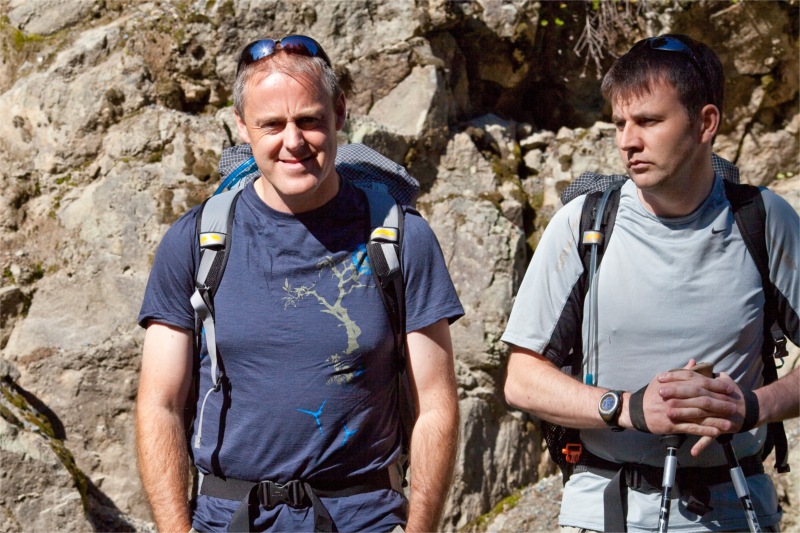 trail is in good repair and currently has no known issues. The only complaints had been of bugs. Oh – and watch our for the resident bear at Mystic Camp – the camp site is on his normal path, and so he's seen there very frequently. All the camp sites have a toilet and bear poles to hang your food. We recommend using the poles rather than tree-hanging.  Dave bought a detailed map for $12 (cash only), and off we went up the unpaved road to Mowich Lake.

Tim was generous enough to pack in an extra 4lbs of weight for his Canon 5D SLR so we could get some great photos. He brought it out at the trailhead to take the obligatory trip-start photo, and quickly realized he had the wrong lens. Instead of a versatile 24-105mm zoom lens, he had left a fixed focal length 135mm lens on it. A big zoom isn't all that ideal for landscape photography, but c'est la vie. In the end, it turned out for the good – Tim got creative with his composures; and we got more people-shots than normal.

We were on the trail around 10:30am. From Mowich the trail immediately drops and then we turned right to take the Spray Park route. Spray Park is not the official path of the Wonderland Trail but it's about the same distance, a lot more climbing, yet prettier than the path via Ipsut Creek, so we felt justified in the choice. 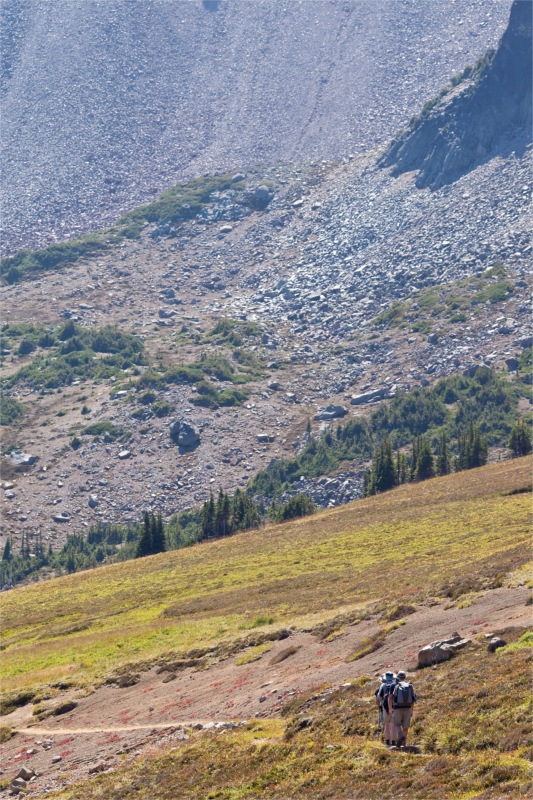 As we arrived towards the top of Spray Park (A park  in Wonderland Trail speak is a wide open meadow area) the morning fog lifted to blue skies and the mountain was revealed in all it's glory. We were a few weeks too late for a vivid display of wild flowers, but it was stunning non the less, with a few lingering species of purple flowers left. We were however, awarded with an abundance of Blueberries and we stopped and munched at various points along the way.

The views from the park were excellent – we believed we could see out to the Stewart Range and make out Little Annapurna. Not only were the landscape views great, but the wildlife viewing was in full swing – Marmots, Chipmonks, Pikas, and Canadian Jays swooping at our food. Tim pointed out that Pikas are having a hard-time in the wild – being pushed to higher and higher elevations and the US FWS are considering listing them as an endangered species. 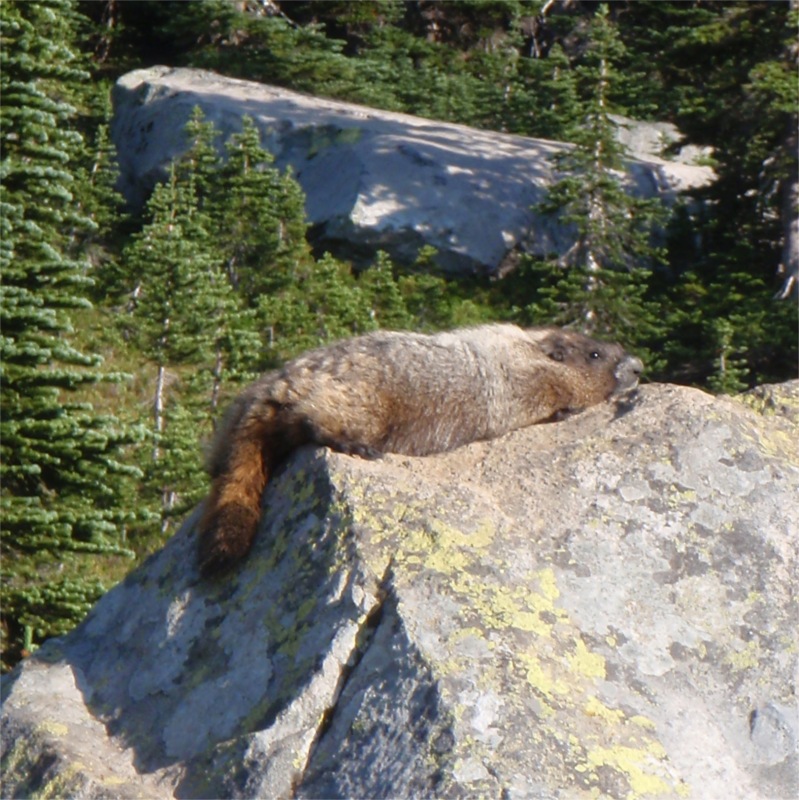 We took a quick break for lunch. I had a fabulous lunch – a trail-made BLT. I took sourdough seed bread from Specialities in Seattle, some cooked British back bacon that I made at home, a little bag of greens, and three tasty tomatoes picked from our garden that very morning. Rounded off with a fresh apple. Very heavy for my usual lunch, but I knew it was going to get eaten within hours 🙂

We also did a little preventative care on our feet. After getting huge blisters on a trail last year – I was taking no chances. I tried out hydropel for the first time on this trip – and it certainly seemed to work. 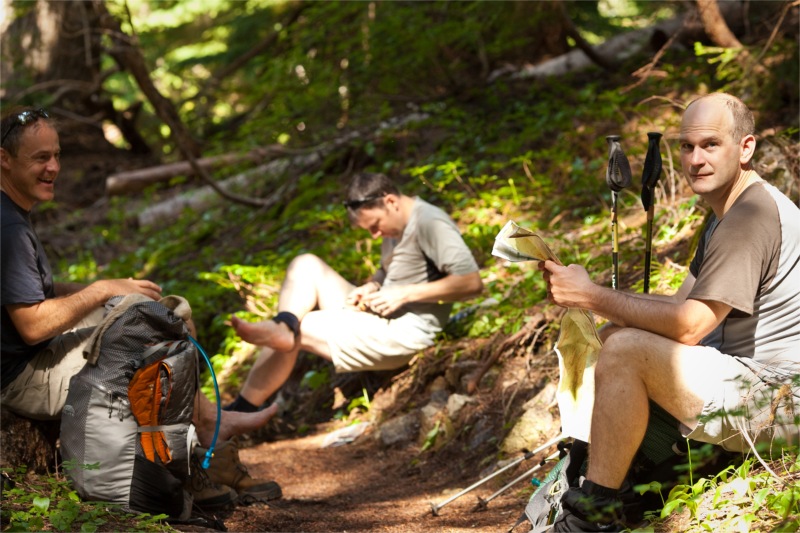 Carbon river has a nice long suspension bridge over it. It's very bouncy and only one person is recommended at a time. 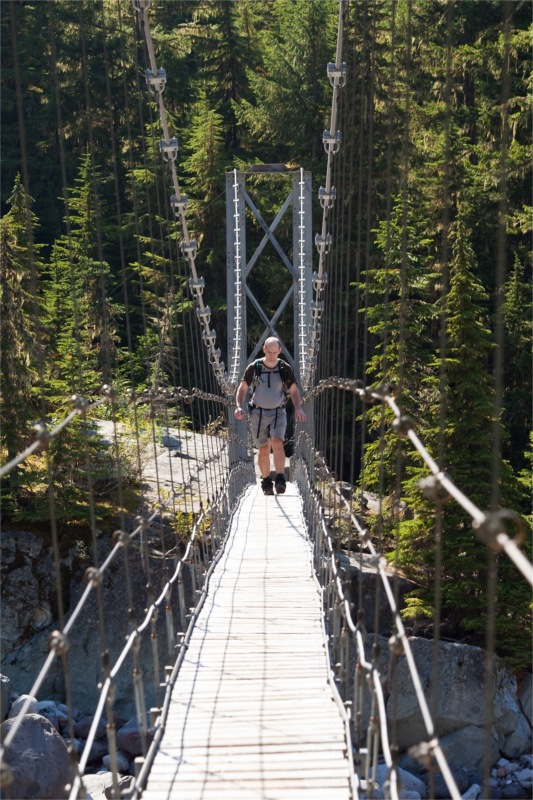 After crossing the river, there is a long, sustained climb up the side of the Carbon Glacier. Nigel got a little sick on the trail after Spray Park (blames it on our McDonalds breakfast stop), and so had to take some Imodium. It was working, but had the side effect of dehydration. In the exposed heat of the mid-day sun – Nigel started feeling very weak and dehydrated. We stopped to get some electrolytes (Nuun) in his water, and spread out the heavies in his pack amongst the rest of the group. Some shade, more fluid and lightening the load did the trick, and Nige was soon moving again in full stride. 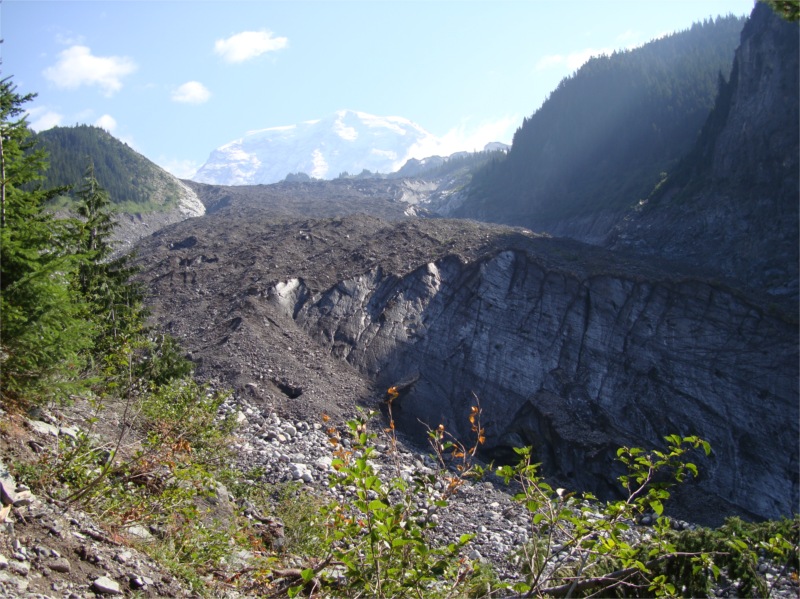 At the top of Carbon is another very pretty park area – with great open views of the mountain. We lingered here to take it in, and then started final climb up over some glacial moraine and down to the lake. We passed a wasp nest on the way down – and Tim took two stings in his shins. The first aid kit came out a second time, and it's only the first day.

We arrived at Mystic Lake around 6pm and Nige & Dave stopped to load up on water, while Tim and I went 1/4 mi down to camp. Mystic was a crowded camp in the trees – not especially exciting. While at camp, we chatted with a nice Dentist from Portland who was doing the northern loop. He was interested in our ultralight gear and Tarp Tent and was looking for ideas to lighten up. 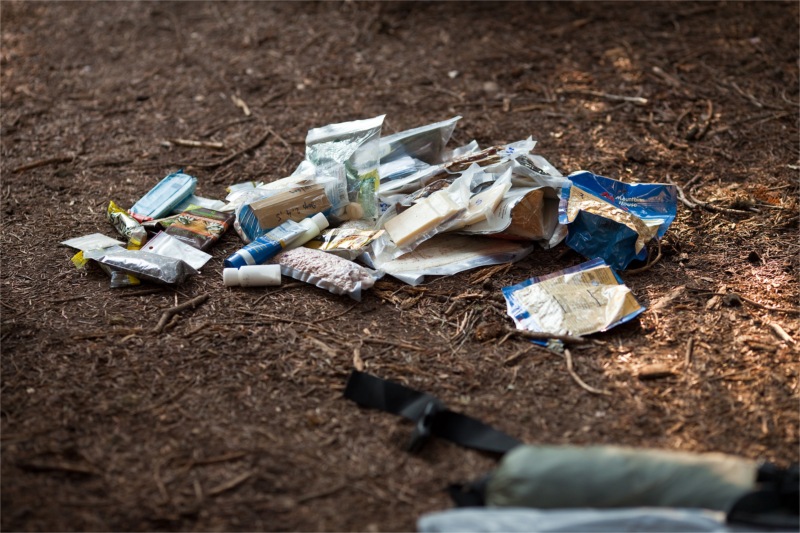 Ate dinner, sorted food, hung food on the pole; and tucked up in bed. No bear sighting.