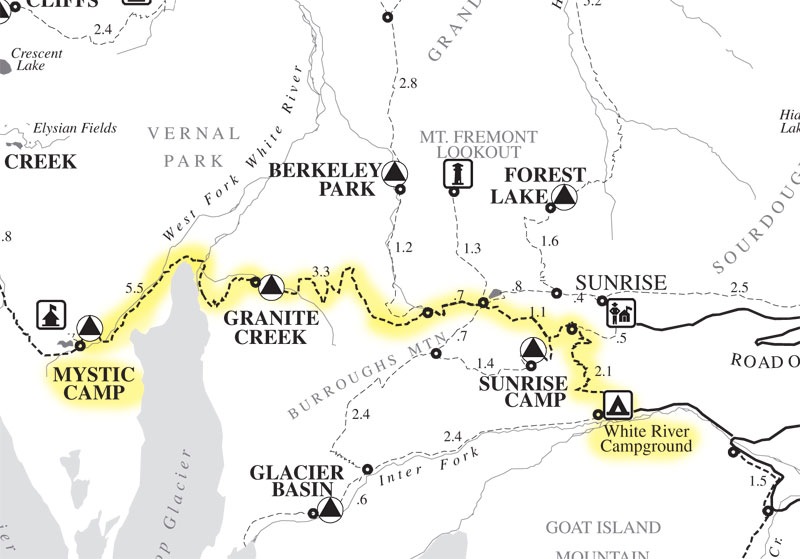 The day started early enough – I think we were out of the tents by 6:30 – but for some reason – we lingered in camp a long time. Perhaps it was the line at the Mystic outhouse, or perhaps it was Nigel filming several outtakes of Tim's Coffmeal  experiment that burned the hours, I really can't recall

The video doesn't do justice to the final product, so here's a close up of a fully prepared bag of Coffmeal. 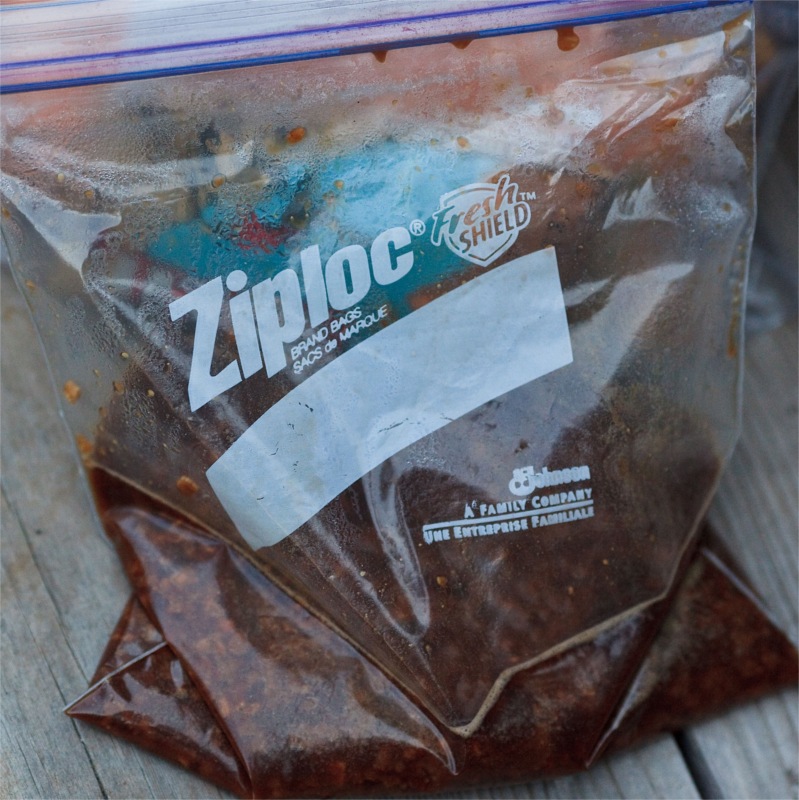 Nigel was brave enough to try a spoonful, and almost threw up in disgust. To which Tim calmly responded – Yeah – it's pretty bad. Maybe I should try using just one Starbucks VIA instead of two packets. 

After all the faffing about, by 9am we were on the road, and almost everyone had left camp ahead of us.

After a mile or so, the trail crossed a huge washed out canyon. We had to descend a rough cut trail in the bank, cross the bottom and up the other side. The washout looked recent. At the top of the canyon, we passed a couple from Enumclaw. Turns out they had exactly the same camp itinerary as we did for the first five days or so; so we figured we'd bump into them often. 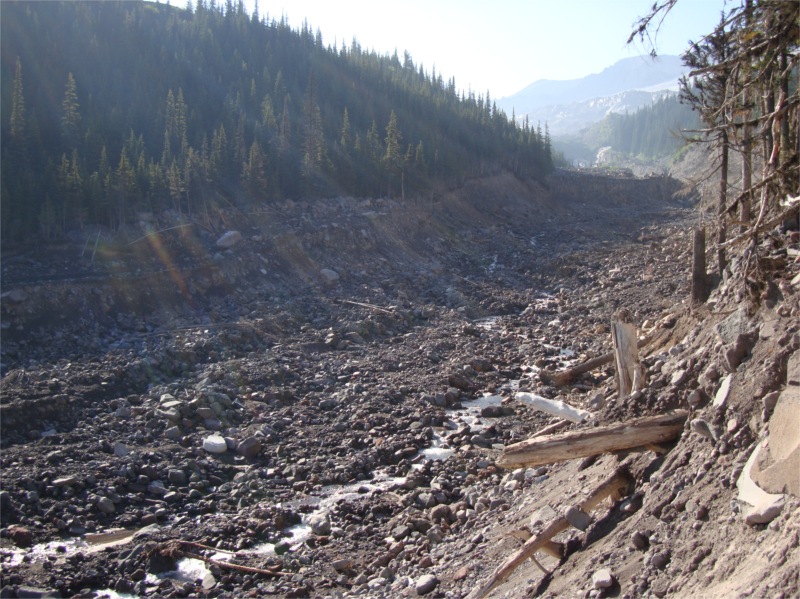 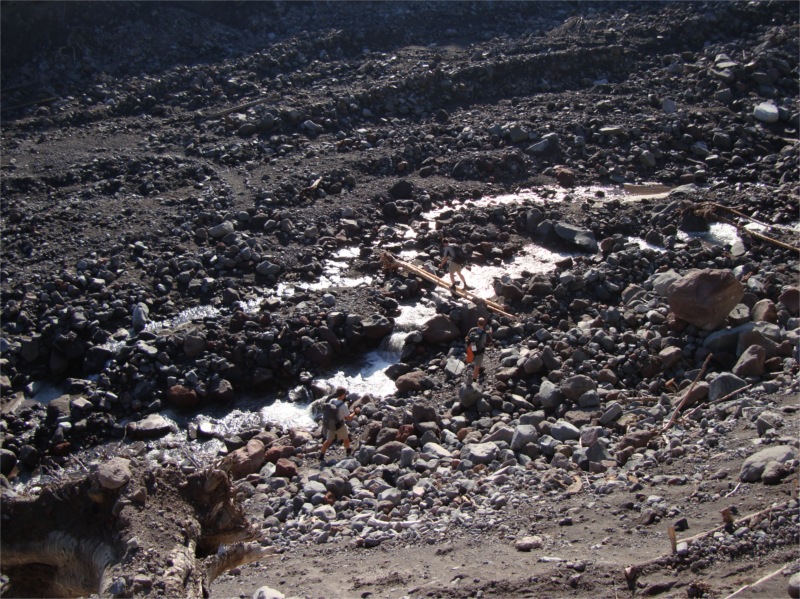 The trail continues and climbs up and around the side of the Winthrop Glacier. The glacier was impressive, with huge mounts of black rocks and debris piled on top to hide it's icy exterior. We noticed some creeks pouring out of the bottom of the Glacier – the water was a very milky dirty colour from all the rock flour. We hypothesized on what caused the Glaciers to melt – our best guess was that the black moraine on top heated up in the sun and caused melting from the top. A quick check on Wikipedia points out that we're all poor geologists

Glaciers move, or flow, downhill due to the internal deformation of ice and gravity. Ice behaves like an easily breaking solid until its thickness exceeds about 50 meters (160 ft). The pressure on ice deeper than that depth causes plastic flow. At the molecular level, ice consists of stacked layers of molecules with relatively weak bonds between the layers. When the stress of the layer above exceeds the inter-layer binding strength, it moves faster than the layer below.  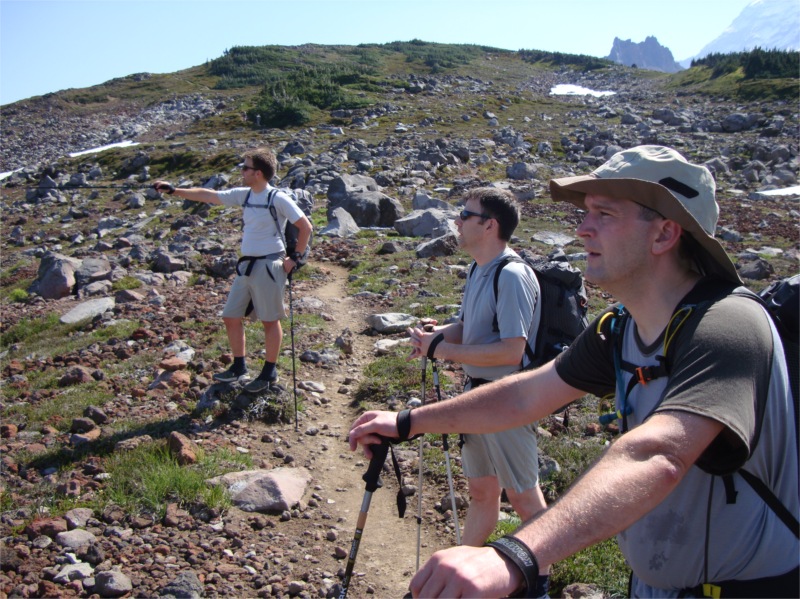 Several short snow patches remained that we needed to cover – Dave grabbed one of our poles for a little extra security on the crossing.

After the Winthrop Glacier, the trail opened up to a very pretty meadow area with killer views of Mt. Rainier behind us and views of Grand Park in the distance. Grand Park sticks out like a sore thumb in this rugged landscape – it looks like a golf course in the middle of the mountains – a huge, perfectly flat meadow on the side of the mountain. The landscape felt very epic here – and reminded me of the vastness of the Pasayten. 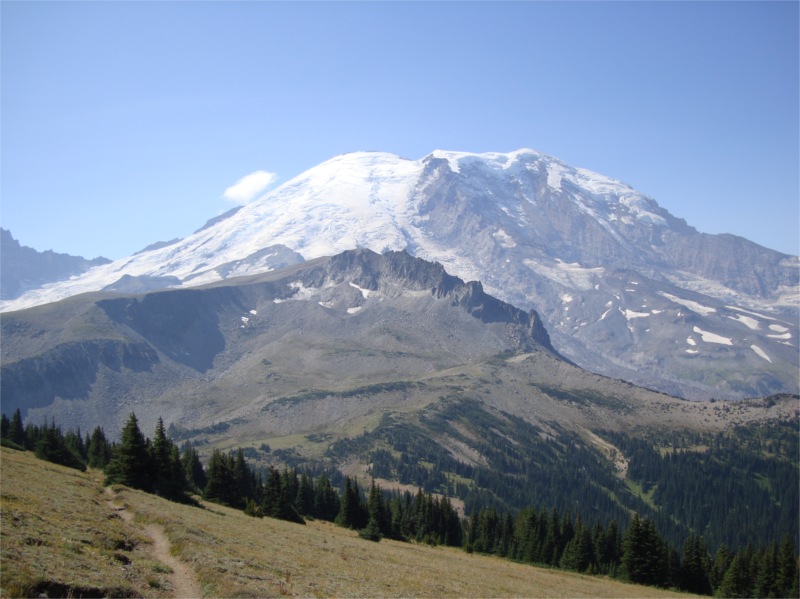 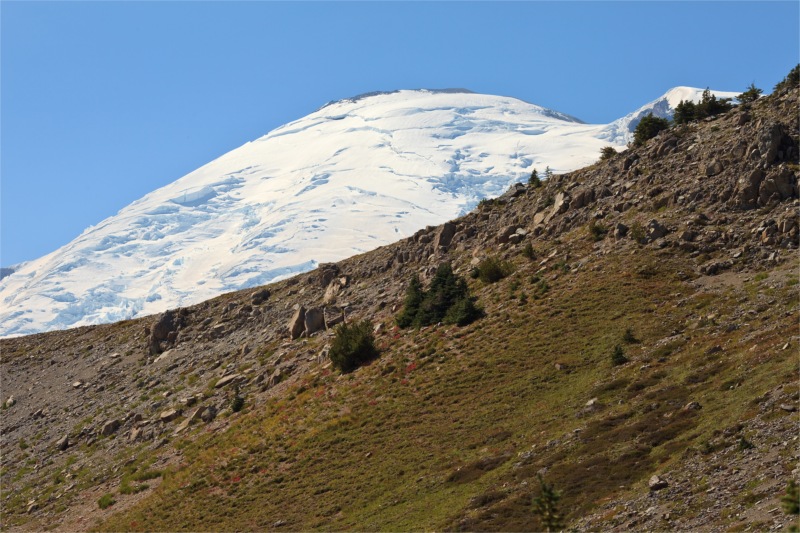 The terrain changed again as we started heading up towards sunrise, and the population density changed too. There are so many trails within a 5 mile radius of Sunrise that the trail was crowded. As we approached Frozen Lake – there were ten or twelve people on the horizon. We figured if you can't beat them then join them – so we too stopped for lunch at Frozen Lake. We thought we found a nice quiet spot amongst the rocks – but were very quickly joined by a few friendly chipmunks and Canadian Jays – aka Camp Robbers  – trying to swoop in and snatch a little cheese. 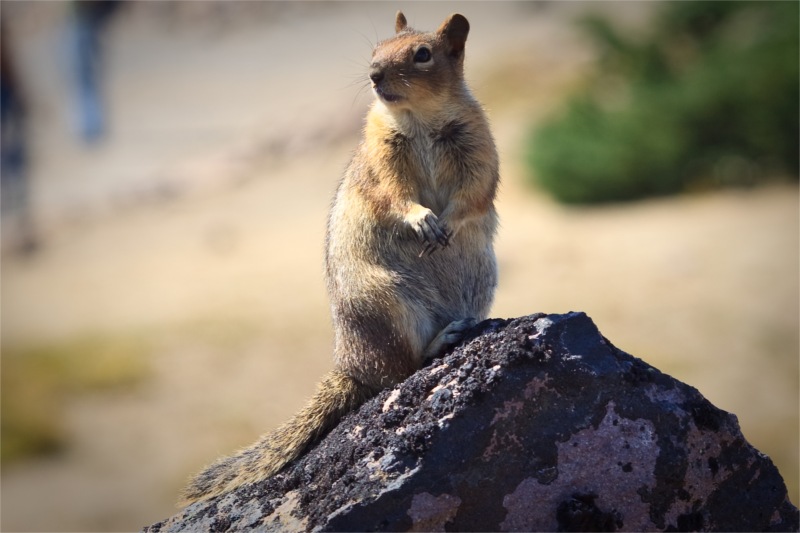 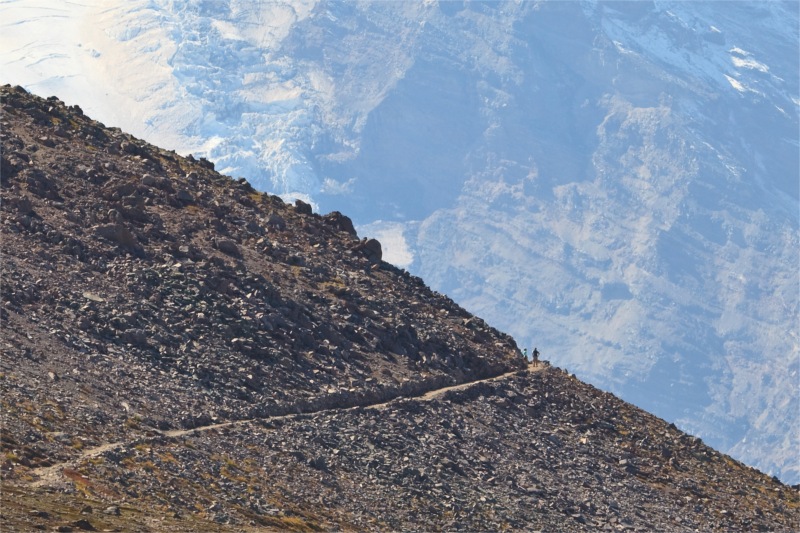 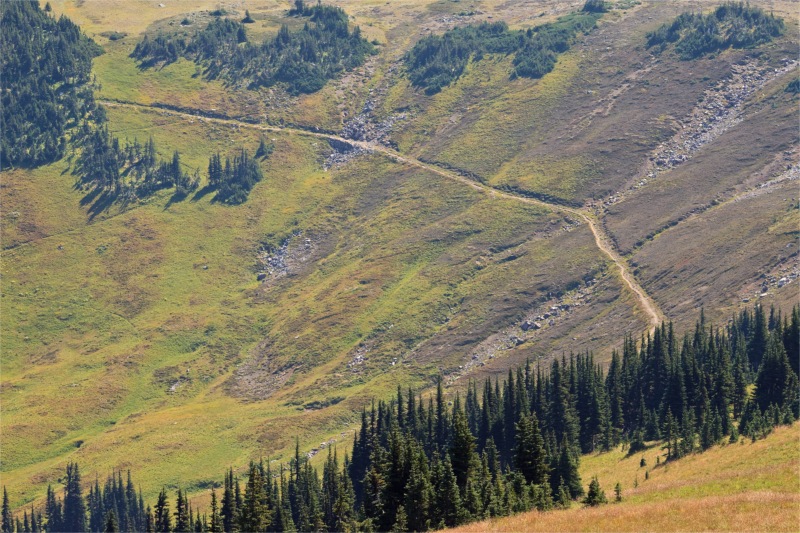 Lunch was a fabulous affair of cheese, crackers and salami. Washed down with a fresh Nuun tablet 🙂

From Frozen Lake we headed down towards Sunrise camp – which didn't look like that great of a place to camp – right in the middle of a very touristy area. As we approached the fork off for the Wonderland Trail heading down to white river – I noticed what appeared to be a cell tower up on the hillside in the distance. Nigel took out his phone, and low and behold was able to get a signal in a very specific spot. We used this opportunity to get a few text messages out to Tim's wife to try and get his 24-105mm lens over to my brother Craig – who would be resupplying us on day five. After successfully getting the word out, we raced down the trail towards White River Campground.

The trail was a steep decent for a couple of miles, dropping about 2400 ft to the campground.

The campground detracted a little from the ˜wilderness experience' – dropping in on a bunch of SUVs and Trucks parked neatly next to their designated picnic tables. However, some of the amenities were admittedly nice to have – a clean toilet with TP, a nice sink to wash in and a ready supply of water that didn't need to be treated. We arrived in camp quite early – a little before 3pm and so were able to take a nice long rest day  – an chill out for a few hours. We lay on the benches and napped in the sunshine.

White River has a special area in the trees reserved for Wonderland Trail hikers – known as the Walk-in campsite , there were four or five spots here and another bear pole. There were also several bear boxes in the area for the car campers to use. 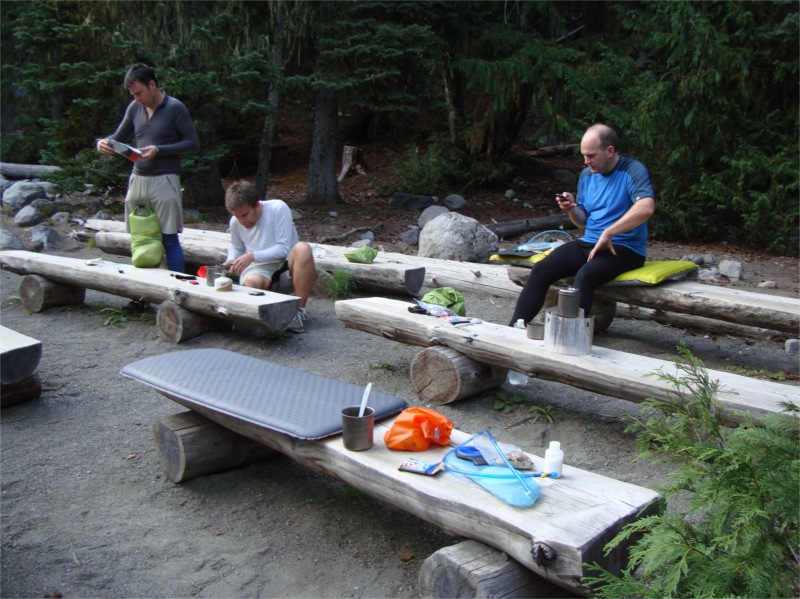 It also had a designated area called Campfire Circle , where they hold events and talks from time-time. Nothing scheduled tonight, so we were able to use it as our staging area for dinner.

Nigel got to experience some UK made freeze dried foods when on his TGO trip. One brand in particular – expedition foods – made such an impact, that he had a shipment of them sent out to Seattle. So Nigel and Daves pantry was well stocked with British favourites – like Chicken Tika Massala , Curried Beef & Rice , Apple Pie & Custard  and so forth.

While my package of Mountain House Beef Stew was decent, I have to admit – I was having freeze-dried-food-envy at their fine selection. My spoon did wander into their bag a few times – and it sure tasted delicious.

Nigel also brought along some Mountain Bread sold at whole foods, torn up and dipped in the Chicken Tikki – if you squinted enough – one could almost imagine a big fat garlic naan. 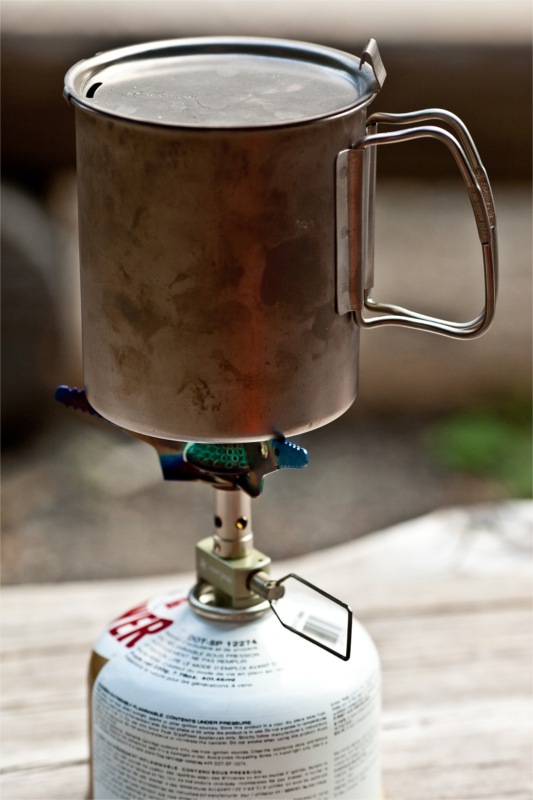 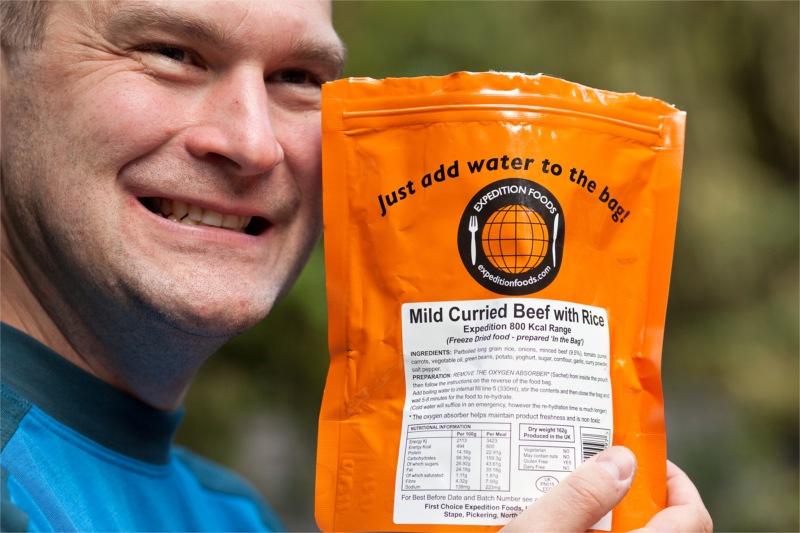 After dinner, we still had a lot of time to kill. Out came the ultralight playing cards and we got started on a game of Spades. Nigel and Dave disappeared back to the tent and came back with sheepish grins on their faces. Both of them were packing contraband items!! Nigel was sporting a fancy pair of Crocs – which he claimed helped massage his feet  in camp. He claimed that almost everyone on the TGO carried a pair – so felt quite justified by the extra 3/4 pound in weight. Dave also was packing in contraband – except his item was much more welcomed. He'd brought in a large hip flask of Scotch along with four shot glasses!! Terribly civilized. So there we sat in Campfire Circle, playing cards and sipping on whisky sniffers how much better can life get?

The couple from Enumclaw showed up in camp also – and were kind enough to stop by and give us a mosquito coil they had with them, so we were well protected from bugs while we played. 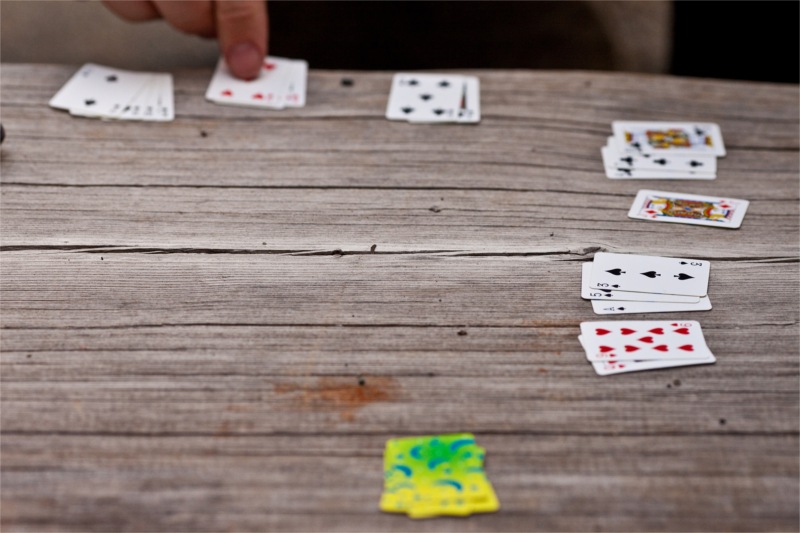