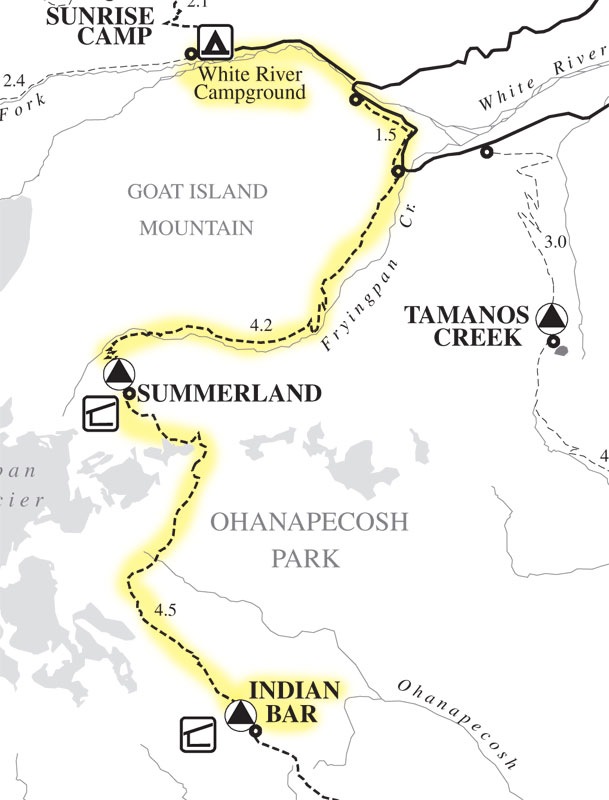 Refreshed after our long half-day rest, we got up early and were treated to an excellent alpenglow on the mountain as we tucked into breakfast. After cleaning up and packing, we hit the road around 7:50 am. 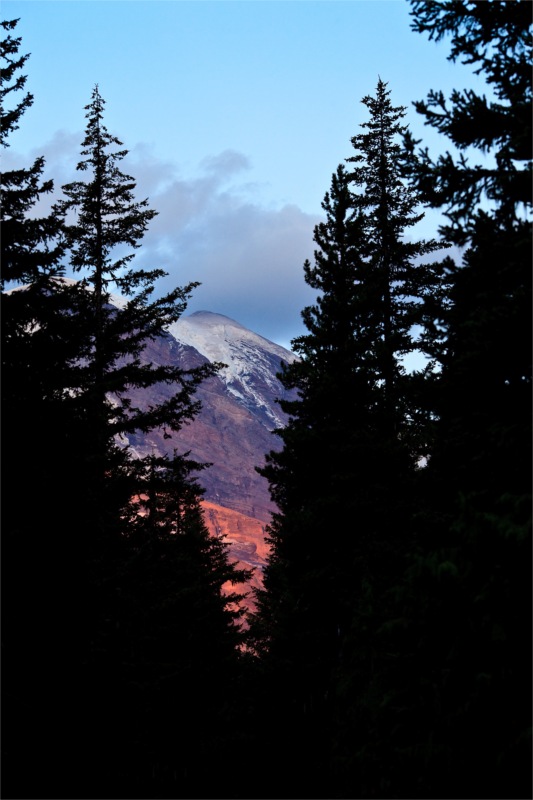 Finding the continuation of the Wonderland Trail was a little tricky – turned out it was on the other side of the car camp ground close to a toilet block.

There was a big tree chopped down over the river with a branch-made handrail for us to cross over. After the crossing – the trail out of White River was more or less level for a while and them started up a very sustained climb to Summerland. 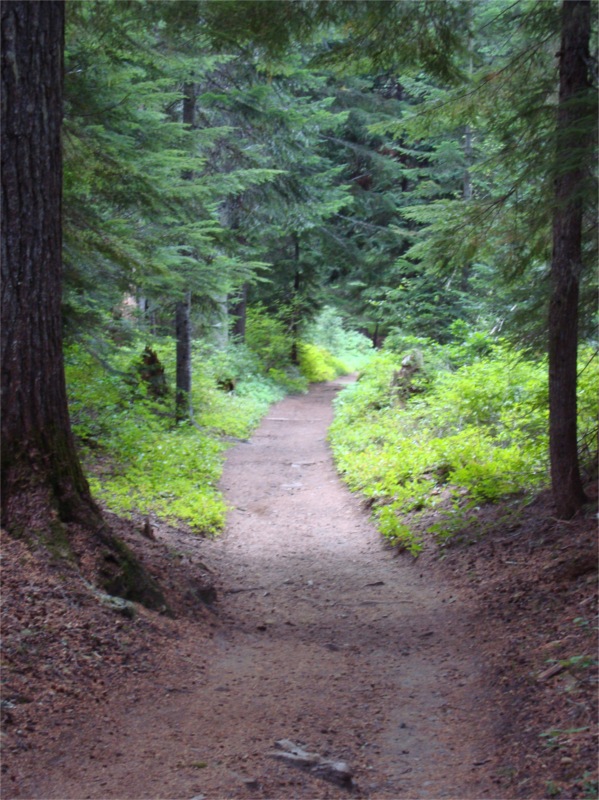 Summerland was a very pretty meadow area. There was a group shelter here that looked like it would be great refuge in a storm. The structure had 3 stone sides and a sloping roof. We stopped and ate a snack at the shelter. 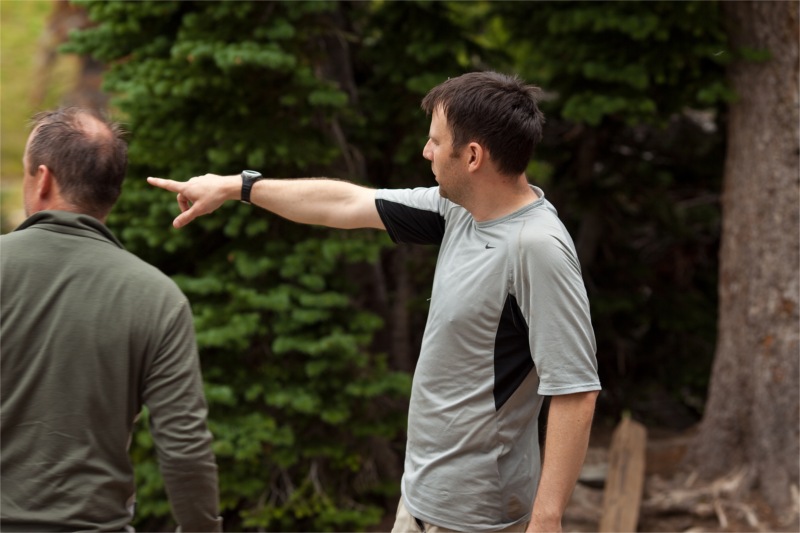 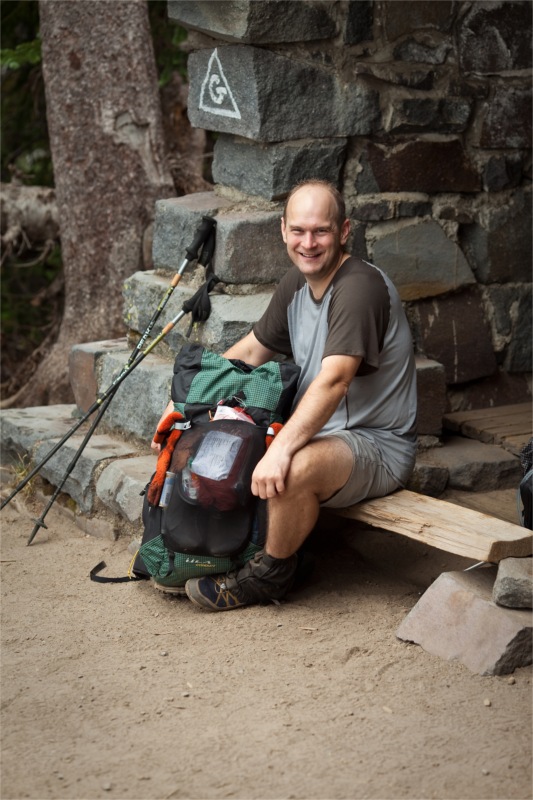 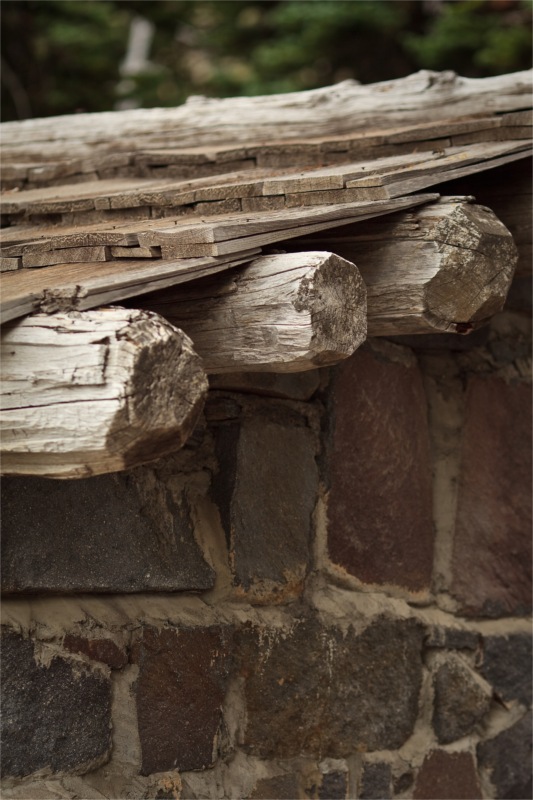 For the second time on the trip – I felt that my food rations were just barely enough. The long climbs caused me to burn up a little more than usual. An extra energy bar per day or something would have been a welcome addition on some of the days. However, later on in the trip this became less of an issue.

We were not alone at Summerland. Plenty of marmots basked in the sun on the rocks and hopped around the trails on the other side of the hill. Dave checked the map and pointed out various landmarks on the horizon. 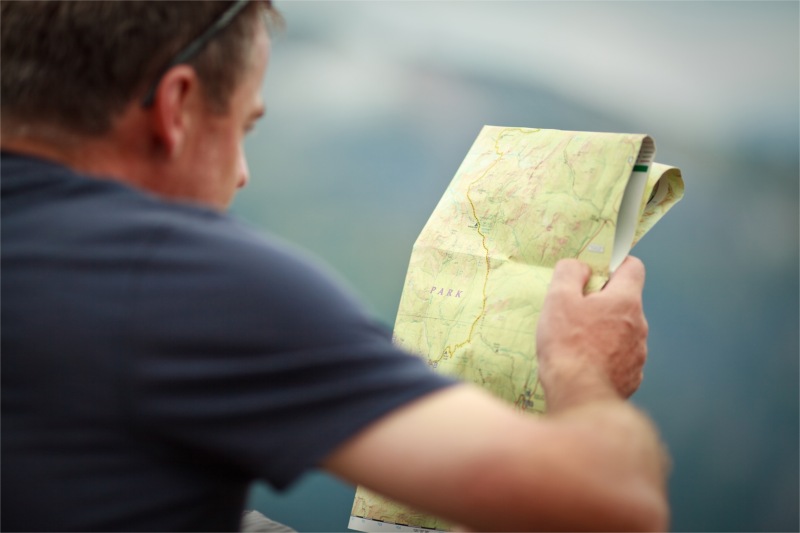 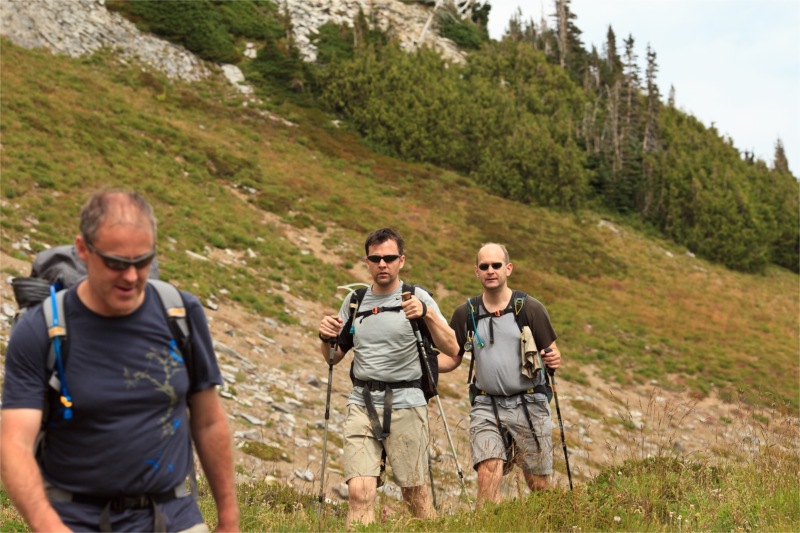 Re-energized after our snack we moved on and started climbing further towards panhandle gap. As we approached the gap – several patches of glacial ice remained behind some of the small ponds, we went over and explored one of them for a while. The ice was very compact and jabbing it with a pole tip did little to scratch the surface. 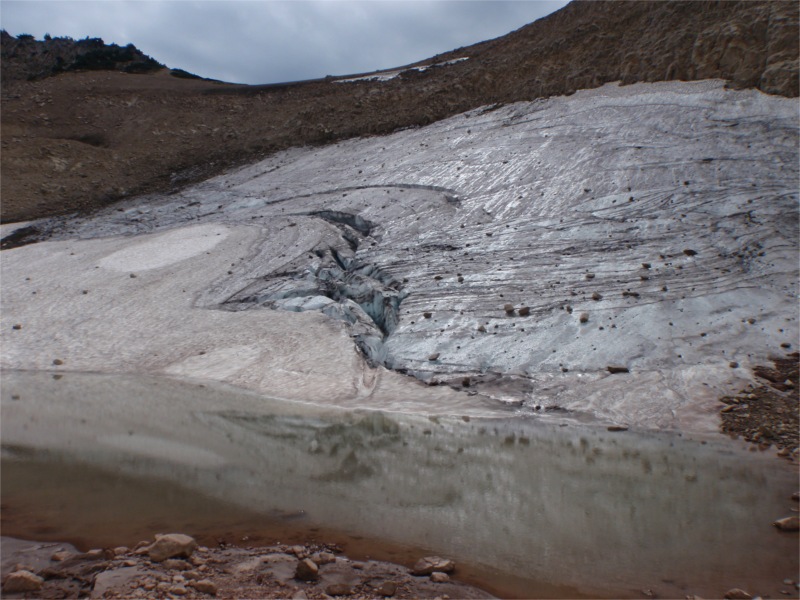 Back on the trail and a few hundred feet of elevation later and we were in the saddle of panhandle gap – one of the highest points on the trail. The weather was reasonable, so we decided to stop here for lunch. 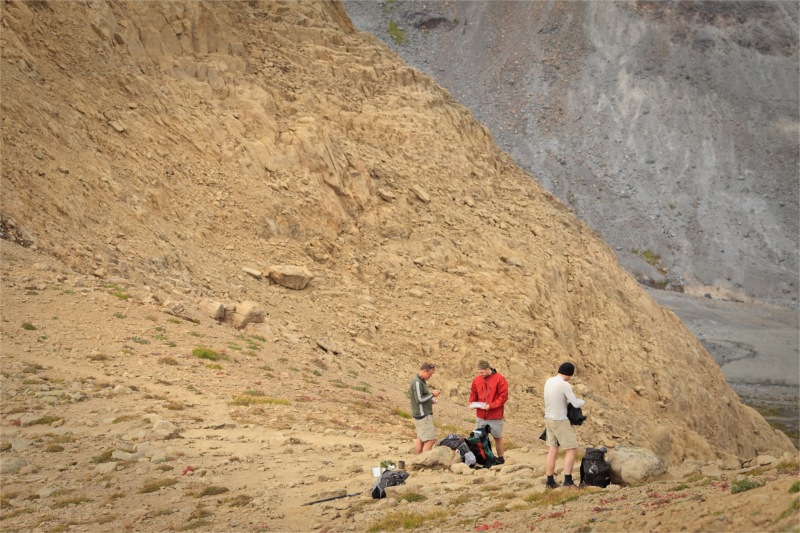 My lunch consisted of Whole Foods hummus mix and mountain bread. I jazzed it up with a little sea salt, black pepper, cayenne pepper and lime powder (to try and replicate the fresh lemon juice) at home all mixed in the same back. The hummus was easy to prepare – just mix with cold water and olive oil – stir well and let sit for 8-10 minutes. I've taken hummus on several trips now, but never seemed to get around to eating it. We always end up getting off the trail earlier than anticipated and the hummus is one I save for last as it keeps so well. It tasted really good – nice and garlicky and was there was a lot of it. 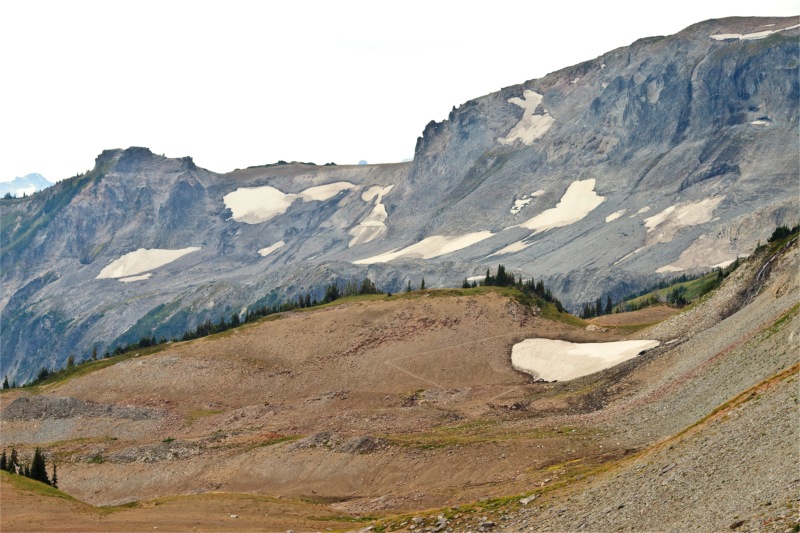 Tim wandered off a side-trail with his big camera to take some photos, while Nigel and Dave broke out their stove and got the builders tea  going. Nigel and Dave also brought some vegetable bouillon cubes with them, and got a few cups of soup going. With all the tea and bouillon – for a moment, I felt like I was hiking with a british boy scout troop. 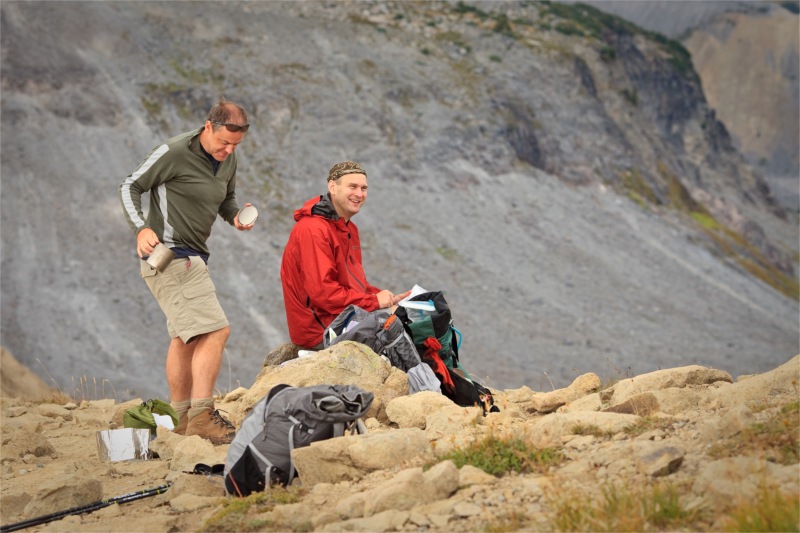 Meanwhile on Tim's short side-trail he found higher elevation and great views of little Tahoma. On the other side of the valley Tim spotted a bunch of white specks moving in the meadow. A quick photo with the 135mm lens and a zoom-in on the LCD display of 22 mega-pixels of data and we confirmed a herd of about 25-30 mountain goats. 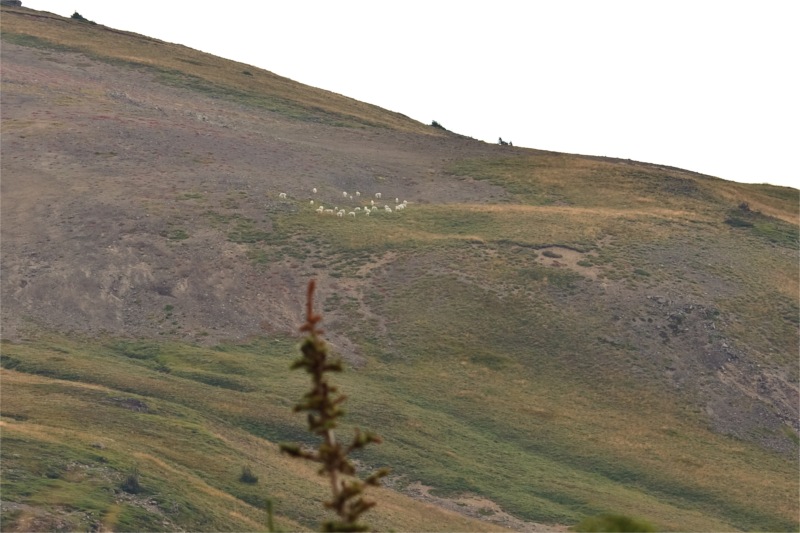 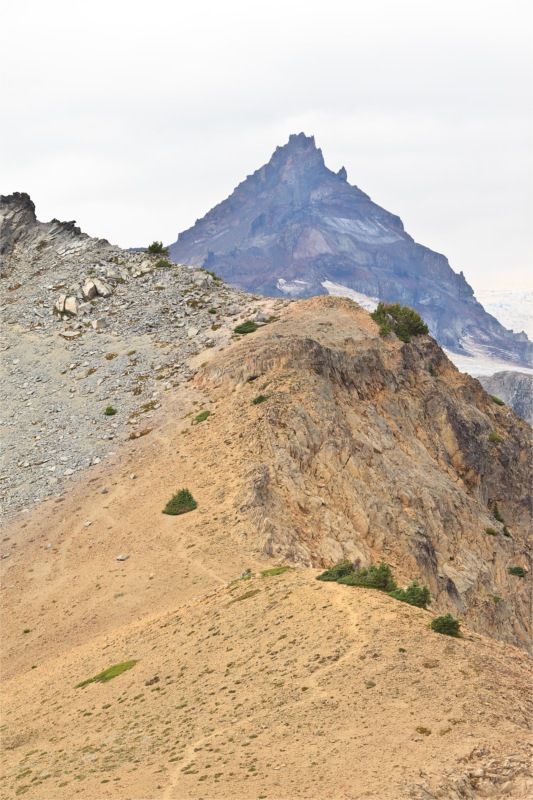 The wind picked up on panhandle gap as we finished up lunch and out came the jackets and hats. We decided to move on and started dropping away into the area below, as soon as we were below the gap – the wind calmed and the sun came out again. So off went the jackets and hats The area after panhandle was stunning – there were patches of fluorescent green lichen growing in random spots in the valley, and little streams running all over the place.

After dipping down, the trail climbed up again over a ridge and then began a long decent towards Indian Bar. Off to the right was a huge glacial valley. To the left were stunning views of Cowlitz Chimneys. 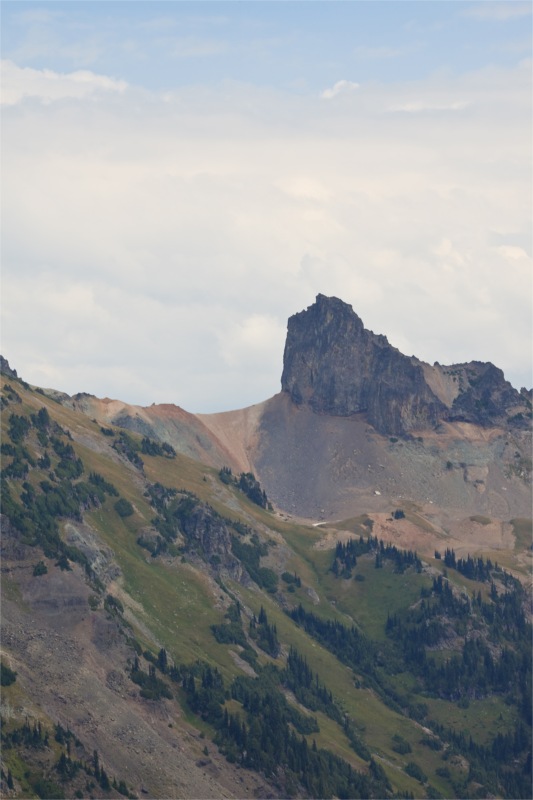 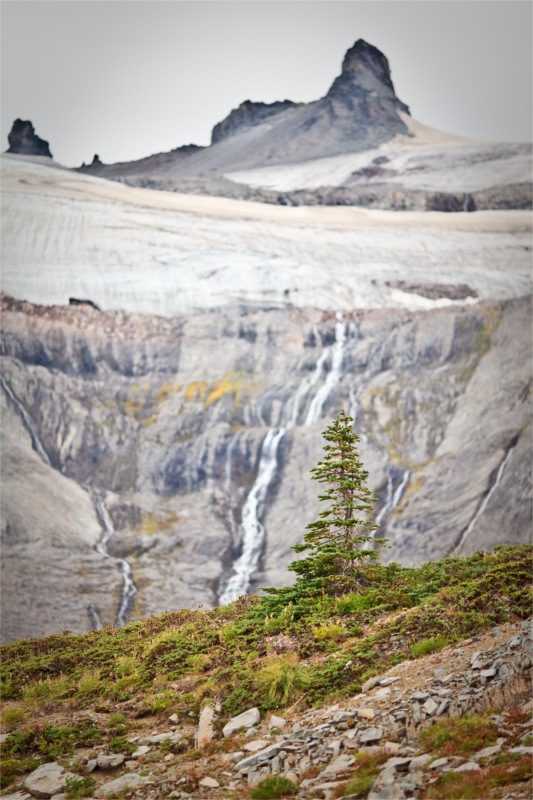 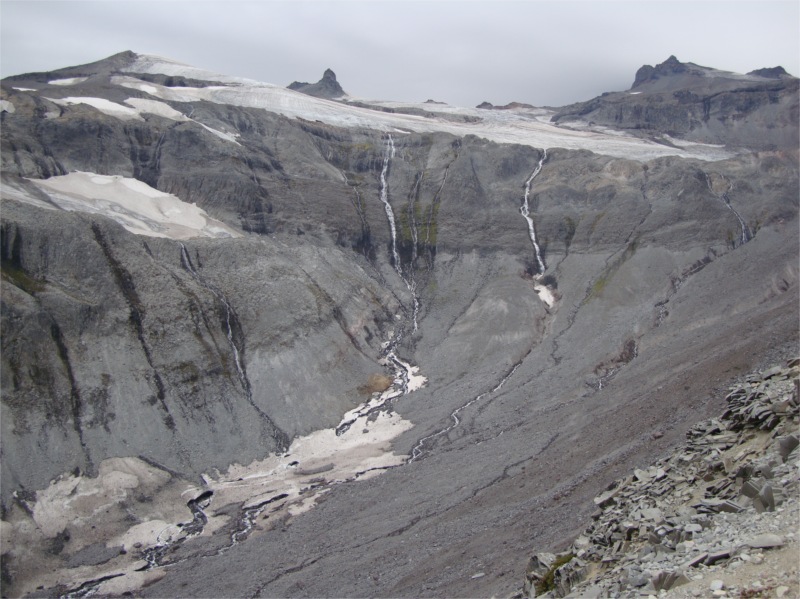 Down to Indian Bar

As the trail descended towards Indian Bar a series of washboard steps began that never seemed to end. In the distance we could see the shelter – a backpack outside it and a couple of people milling around inside. Here's a shot of the shelter in the bottom of the valley. 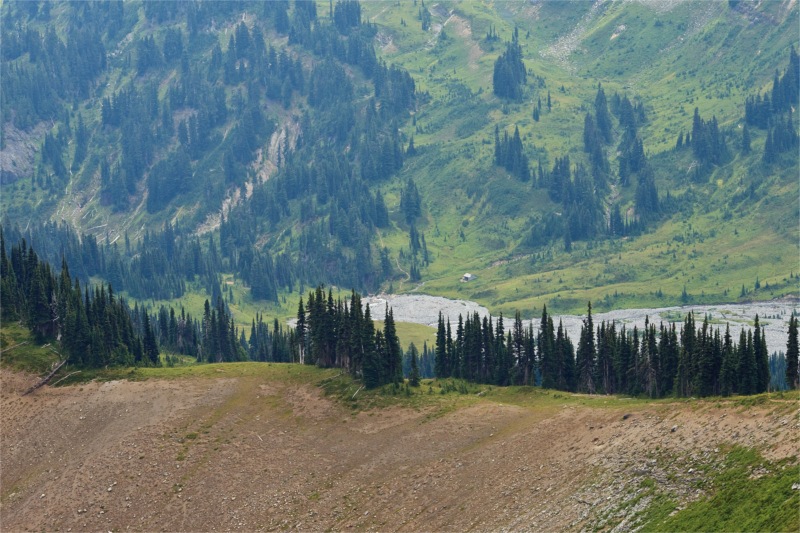 On the way down we passed a delectable blueberry patch. Dave and I lingered for some time, filling up a zip lock for breakfast while Nigel and Tim went on ahead. We're convinced that the higher altitude blueberries taste best 🙂

We arrived at the Indian bar shelter around 3pm. We had the group permit for the evening – and were excited to stay in a structure. The shelter was spectacular – it had three walls of stone, a solid roof and eight bunk beds. The bunks were solid wood planking in a steel frame tied to the wall. There was a fair amount of mouse poop on them – and so Tim warned us all not to snort the mouse poo for fear of hantavirus – tempting though it was. There is an old abandoned fireplace inside with a note asking hikers not to use it.

At the shelter, a father and daughter were gearing up deciding if they were going to stay the night or push on to their planned destination at Summerland. The weather was starting to turn a little and panhandle gap was already swallowed in cloud – we told them it will be a hard push to Summerland by nightfall – but they decided to go for it anyway.

As we arrived early again, we headed to the creek for a refreshing wash and to treat some water. We also discovered that the side of the shelter made a wonderful laundry wall to dry out our sweat-soaked clothes. 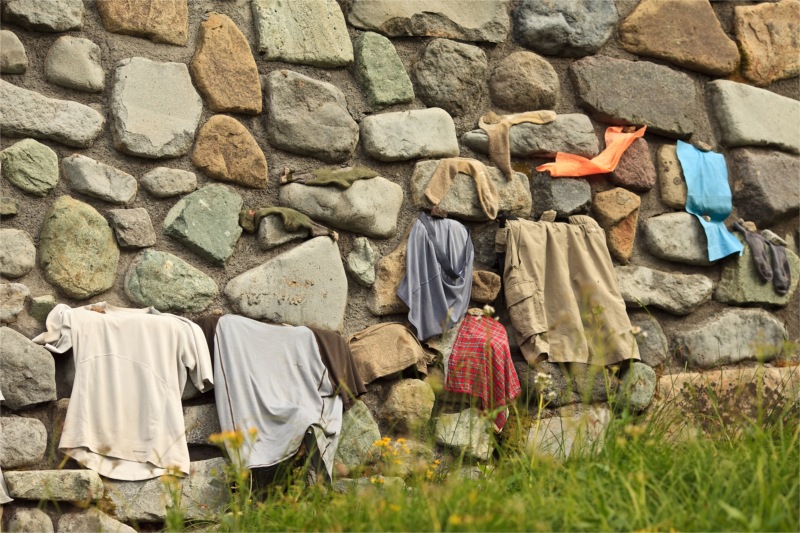 While washing in the creek, Nigel made friends with two east cost hikers coming up from nickel creek, with two more ladies in their party an hour or two behind them. 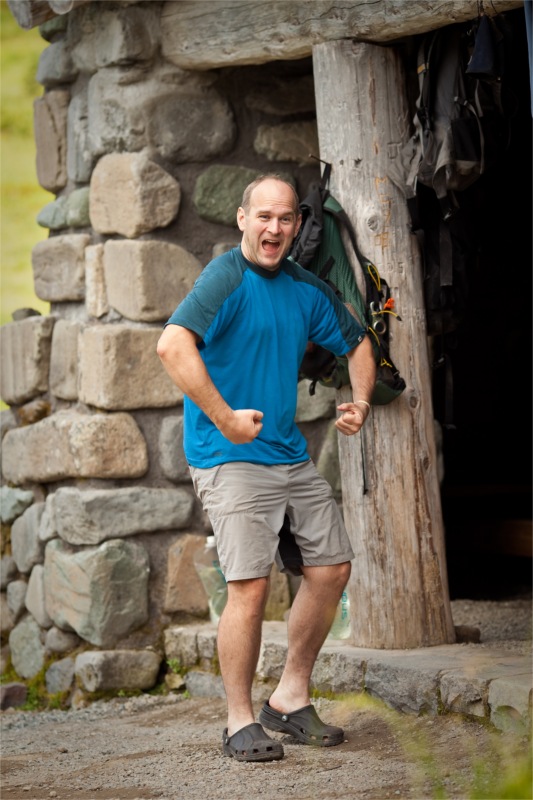 As we organized our food and chilled out around the shelter, the weather started turning fast – low clouds rolled in a swallowed Indian Bar valley until we couldn't even see the trees on the other side of the river. We wondered about the two hikers heading up to summer land – at the pace they were going, we estimated that wouldn't even be at panhandle yet – not a great place to get socked in. 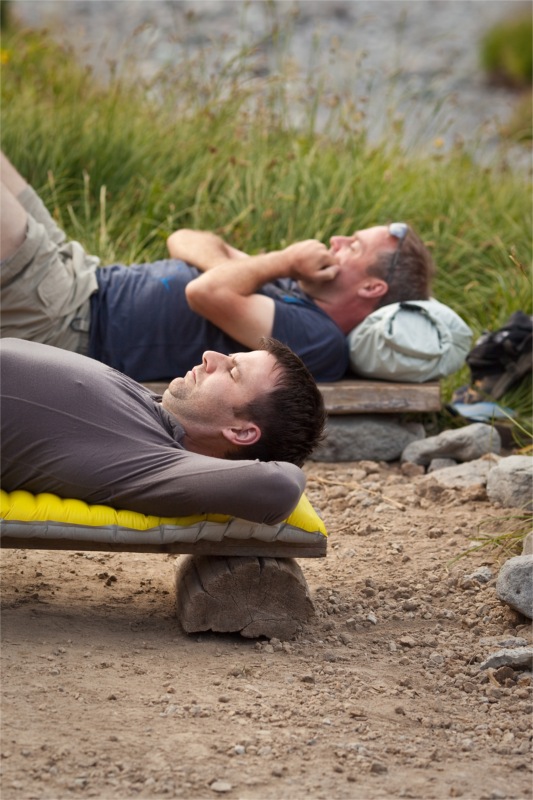 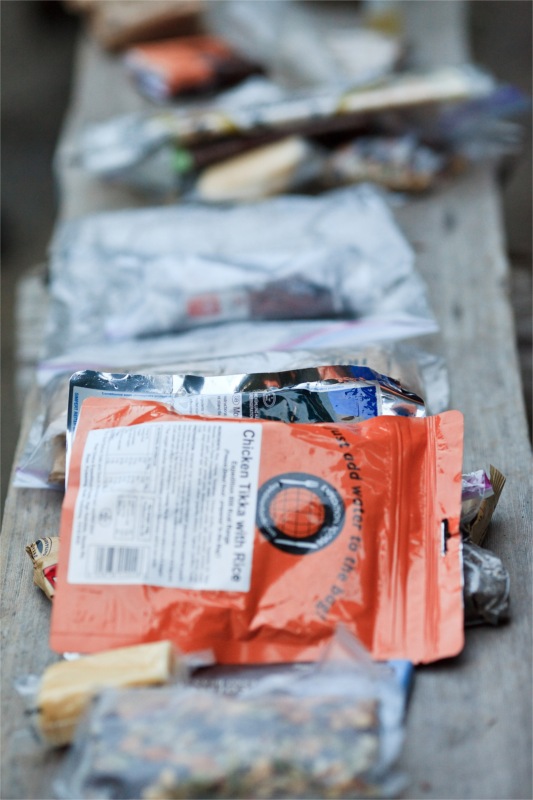 The other two ladies showed up and decided they would prefer to stay in the shelter also given the changing conditions. All four of the east cost hikers came over to cook dinner and were sporting crocks at camp, so Nigel felt very at home with his contraband pair. 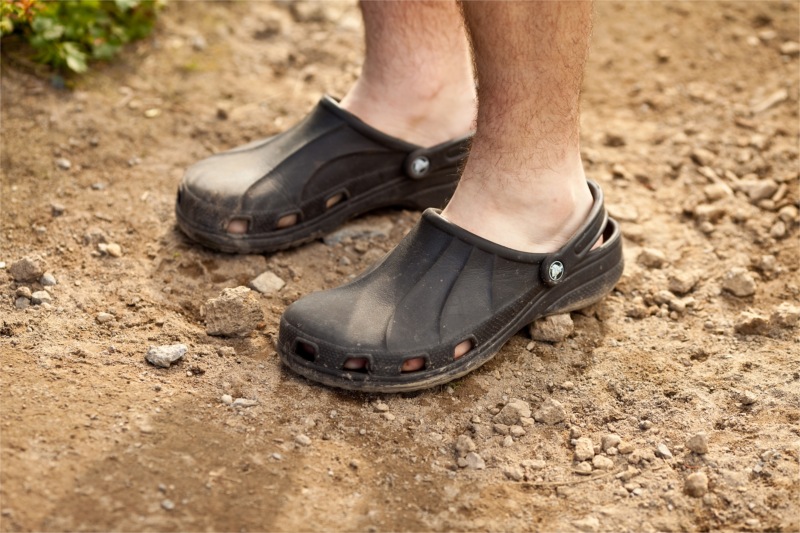 The outhouse  at Indian Bar deserves and honorable mention also. It is so far up the hill behind the shelter, that we actually counted some of the trips as side trip mileage. Once you arrive, however, you are handsomely rewarded – the views from the throne are sweeping and spectacular up the valley towards panhandle, while behind a thin covering of trees dampens the noise from a trickling waterfall.

As evening fell, we hung the food and broke out the headlamps for another game of spades. We played long after dark – which gave Dave and I the chance to redeem ourselves from our pathetic performance the night before. Amazingly, Daves flask of scotch kept on giving that night too 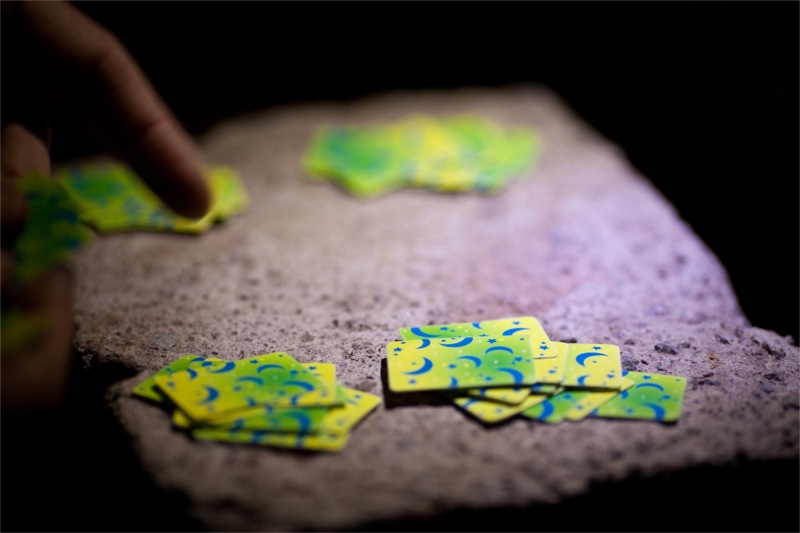 We retired to the bunks and hoped that we didn't get nibbled on my mice in the night. The temperatures dropped and outside was bright from the moon, yet eerie from the low fog in the valley all night long.