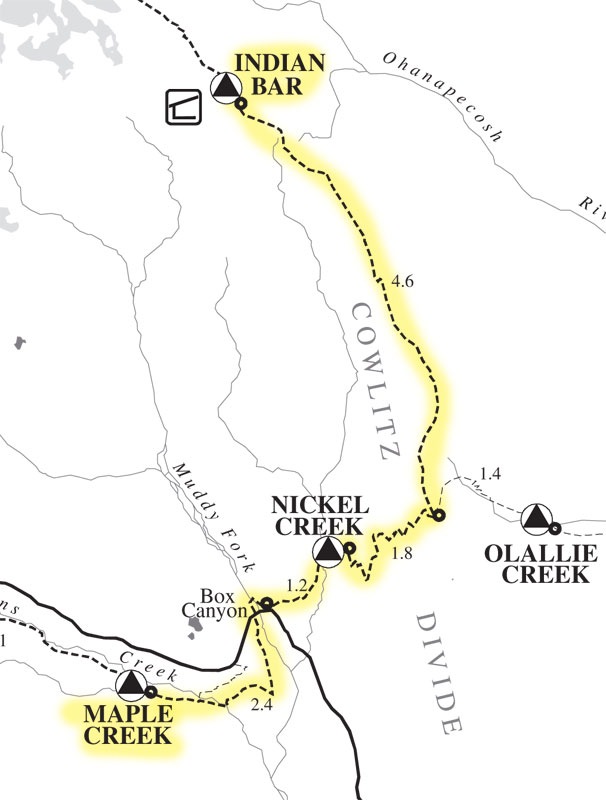 We woke up at 6:30 to a full view of the other side of the river from the missing wall of the shelter. Phew – we made it through the night without getting pooped on or nibbled by mice.

I stepped outside to assess the situation. Given the low cloud and changing weather in the evening I thought we might be in for a rough day. Outside the shelter at first the skies seemed grey, but as my eyes adjusted to the light I realized that they were crystal clear and blue and the valley was out in all it's glory. It was going to be a good one. 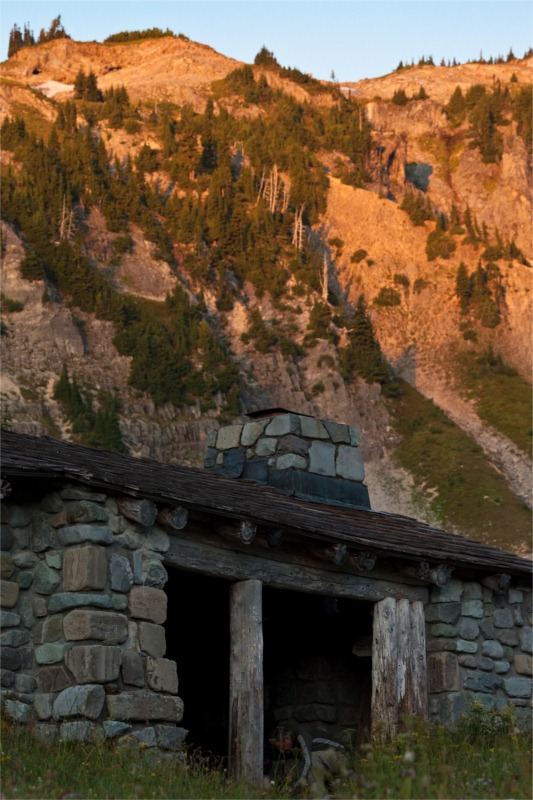 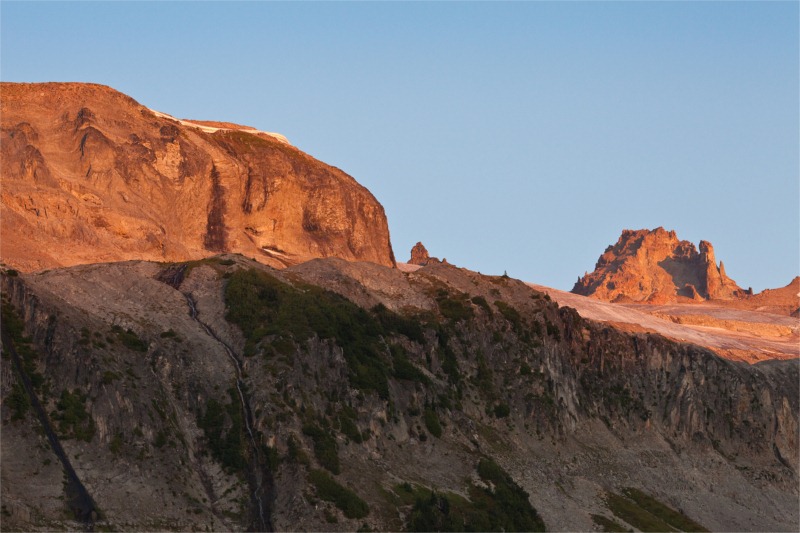 We were on the trail by 7:50. Tim and Dave went ahead a little to try and get some early light photos while Nige and I finished packing. The trail out of Indian Bar starts off as steep as the inbound trail on the other side. Foolishly, Nigel and I decided to run the first few sections of steps to clear out the cobwebs and try and catch up with Dave and Tim. The trail was steep, so the run was short lived.

As we climbed the path, the sun shined down in our faces from up high. Tim and Dave were silhouetted in the distance and bright cotton-like plants glistened in the morning sun. Behind us was a crystal clear view of the Mountain. The sun/silhouetting effect was breathtaking and made for an inspiring start to the morning. I wish I could have captured it in a photo – but only this one came close enough 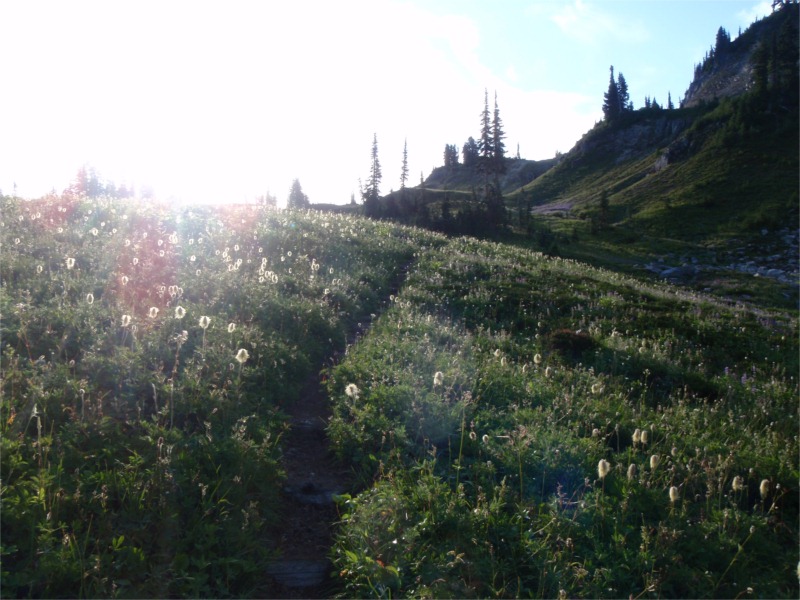 We caught up with the boys and stopped to drink water and take in the views. As we watched the mountain, a small cloud of what looked like fog started to appear to the left of the summit. We stood there for 20 minutes while the cloud came around to the right and enveloped the mountain in a flat-bottomed halo. A lenticular cloud, usually a sign of changing weather – which for us – meant it could only get worse. 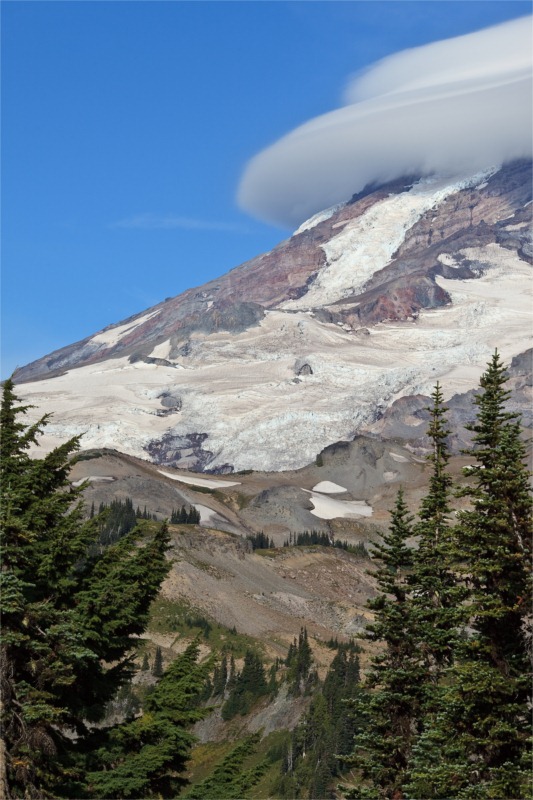 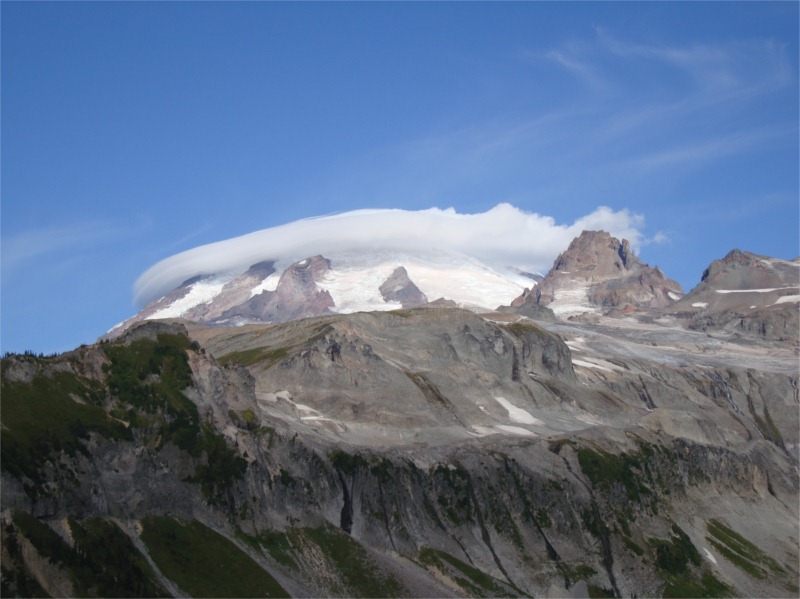 We moved on and climbed further up with even opening views. As we climbed, we passed by a section of what looked like limestone pavement. It was almost as if the Romans had built a road through here.

On the climb, Tim decided that next time we backpack together as a group – we should all take specialized roles. The idea is we can study up when off the trail and educate each other during the hike. Here's how we carved them out:

How did we arrive at such a distribution? Easy – Tim was carrying the load for most of us at this point – naming countless birds, educating us on types of trees from foliage and cone shapes, and always had his finger on which peak was which. Dave was making up all sorts of crap about Geology that none of us really knew enough to challenge, so we went with it. Nigel brought a massive contraband first aid kit with everything under the sun in it – so he seemed like the perfect fit for the medic. Meanwhile, I was stuffing my face with blueberries and occasionally asking the group I wonder if I can eat this? .

We reached the high point in a lovely meadow ridge area. The views were wrap-around stunning. Mt. Adams, Mt. Hood, Goat Rocks and the Tatoosh Range were all clearly in view. We lingered for a while basking in the panorama and refueled with a little snack. It was hot in the Sun – in the high 70's today. 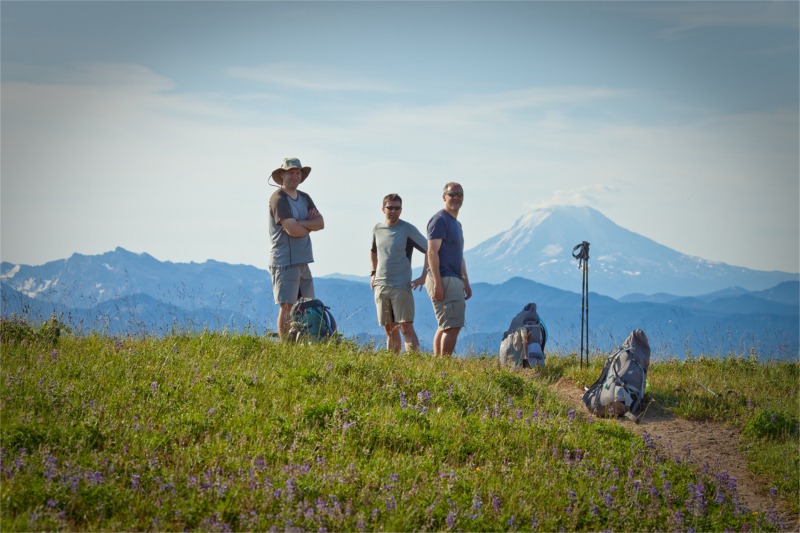 Back to the Forest

As we started the long decent down – we saw an elk in the distance jumping low in the trees. Later on the trail, we passed a spot close to where the elk was and there were 10 or 12 crop circles  in the long grass meadow. It looked like elk impressions and they were fresh from last night. 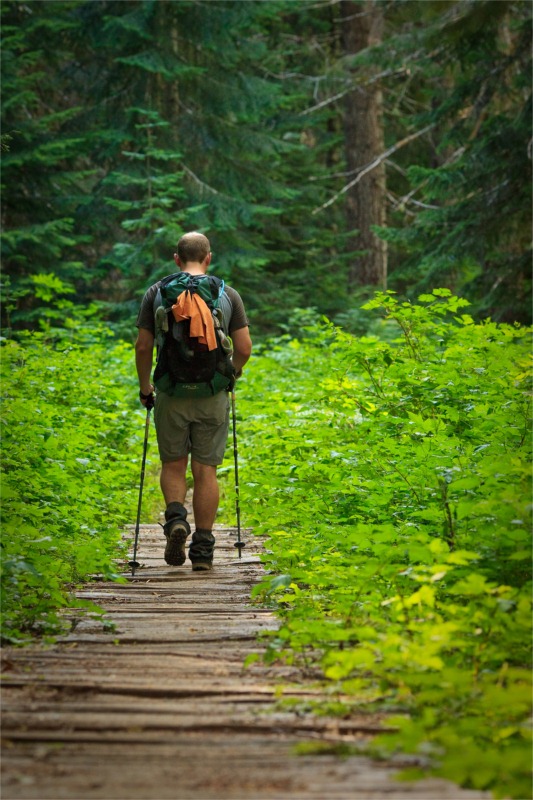 Descending through the forest we passed group of twelve heading for Indian Bar – we warned them to conserve water as it was dry the entire way.

Eventually we hit Nickel Creek and stopped to wash in the stream. Tim decided to go for a little plunge-pool bath and dry out on a big tree. 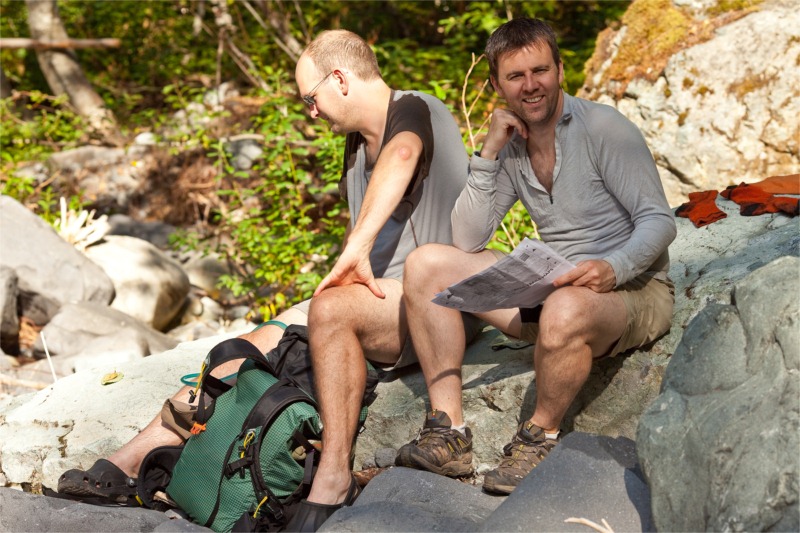 We ate lunch here (cheese, Salami & Chocolate) and burned an hour relaxing in the sun.

Back on the Trail and a mile or so later, and we arrived at Box Canyon. This is a point where the Wonderland Trail crosses a road and there is a small lookout area with bathroom etc. We dumped trash here but didn't linger long. Leaving box canyon we ran into a trail crew working on a section of the path – we thanked them for their hard work. The Wonderland trail is truly a meticulously maintained ninety mile path – and we were very grateful for their efforts.

We pounded out the next 2Â½ miles pretty quick and were at Maple Creek before we knew it – our destination for the night.

We arrived early yet again – and so had our choice of camp sites. After scouting them out, we settled on camp 4 – or Stone Henge  as we affectionately called it. It's way in the back and looks out on an open meadow area, behind camp is a huge pile of broken columnar basalt. Some creative hiker had taken some short sections and built a miniature stone henge sculpture. 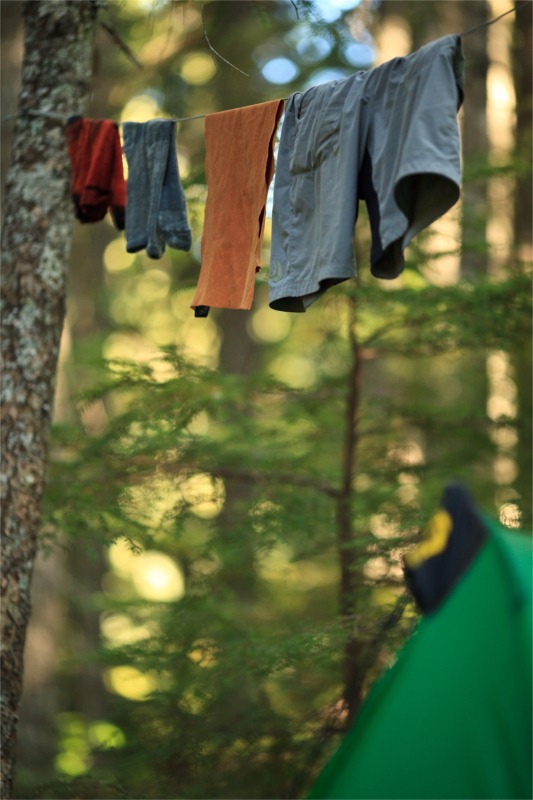 The toilets at Maple were actually an overflowing toxic biohazard dump, so we steered clear of them.

We went down to the creek to wash up. Nigel and Dave both had Patagonia and Ibex Wool T-Shirts on – it was impressive how quickly they dried out when washed and re-worn slightly damp next to the skin. They also raved about their performance and comfort for most of the trip – I need to check one out next summer maybe. 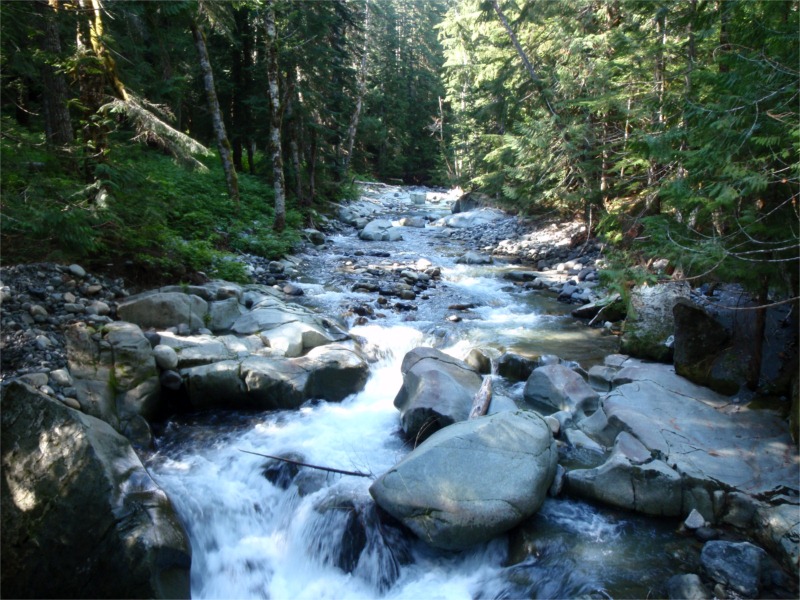 Back at Camp 4 – it was still warm early into the evening. We clocked around 80 degrees at 5pm, so we hung out and chatted.

The Chicken Tikka came out for dinner again, Beef Stew for myself and Chili Mac for Tim. Dave and Nigel had Chocolate Mousse also – which I had little taste of – a nice treat, but quite the sugar bomb. 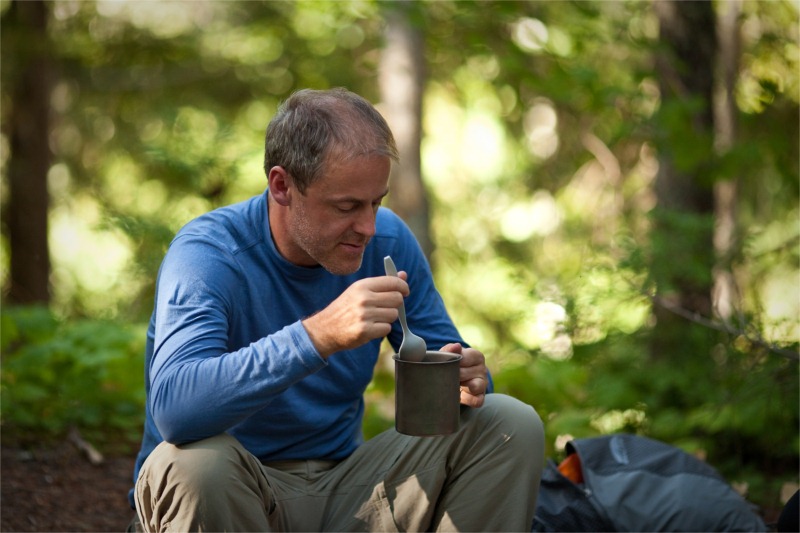 We hung our food and headed back to Camp 4 to drink the last of the scotch and continue our Spades championship. The cards were getting well used, dirty and damp now – which made them tough to handle. We swore if we ever pass through town again, we'd splurge on a real pack given that we were using them so much.

As the light faded, we we treated to a stunning moonrise on the ridge in the distance. It was bright and full – and the craters were very visible. The moon rolled up the tree lined ridge – giving some awesome tree silhouettes against the light. 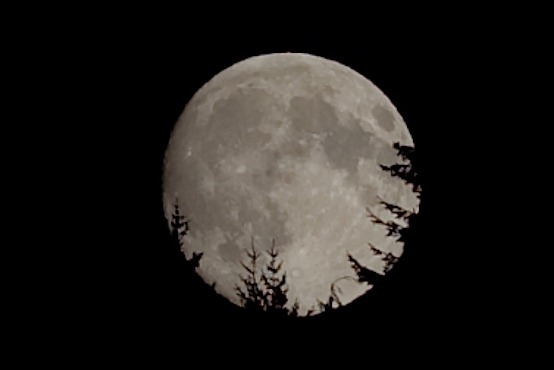 Finally we turned in for the night, and I pull the tarp tent taught before we got in – expecting a little drizzle in the morning.

Around 2am rain started falling on the tent, promptly followed by some deafening thunder and lightening which continued through the night.