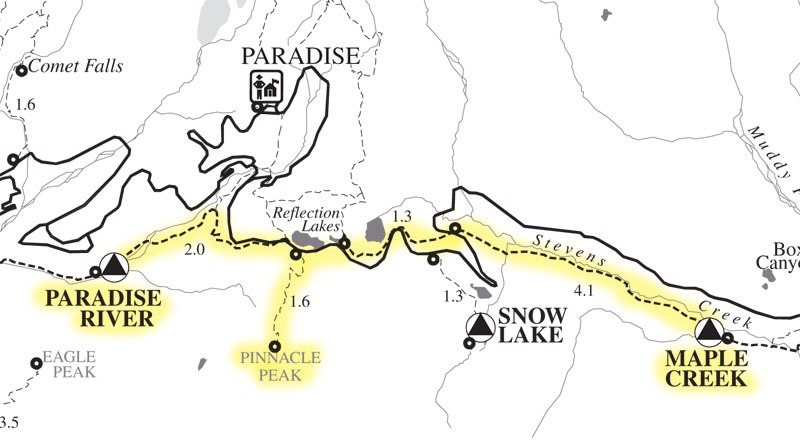 The rain slowed to a trickle in the early morning so we hopped up and took advantage of the lull to grab some breakfast. The toilets were so overflowing in Maple Creek that we decided not to contribute to the problem and broke out the trowel and set up camp  in the nearby clearing.

After packing away the soggy tent, we broke camp around 9:30. 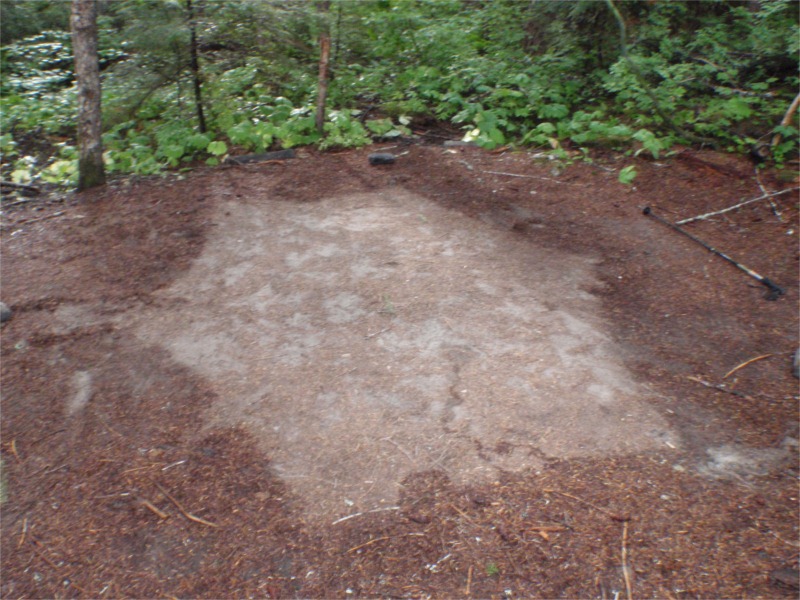 The trail started out innocent enough – traversing Stevens Creek in the woods. Soon we came across badly conditioned sections of the trail – lots of washouts and erosion from flooding with make-shift paths around. 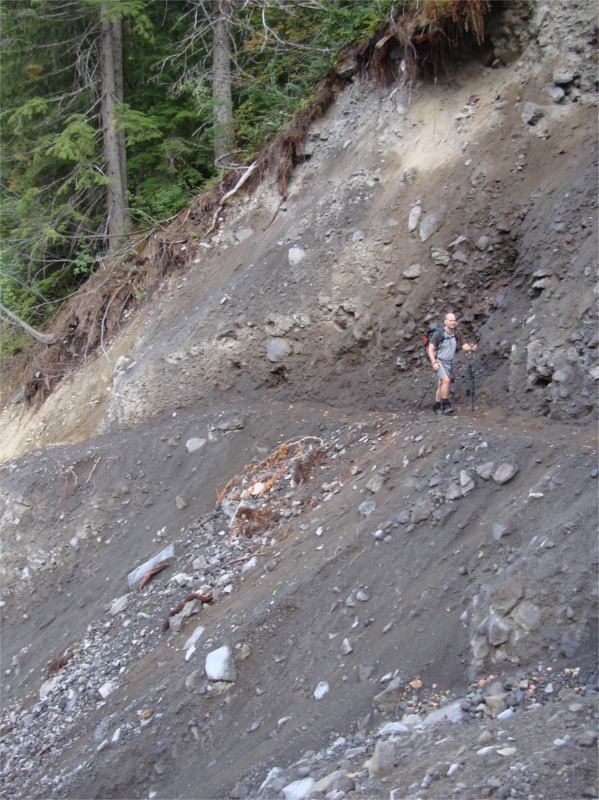 The overgrowth was wet and made for a soggy morning stroll. We powered on and soon put the easy miles to the lakes behind us. The trail crossed the road several times on the way to Reflection lakes – with the occasional car rolling by. 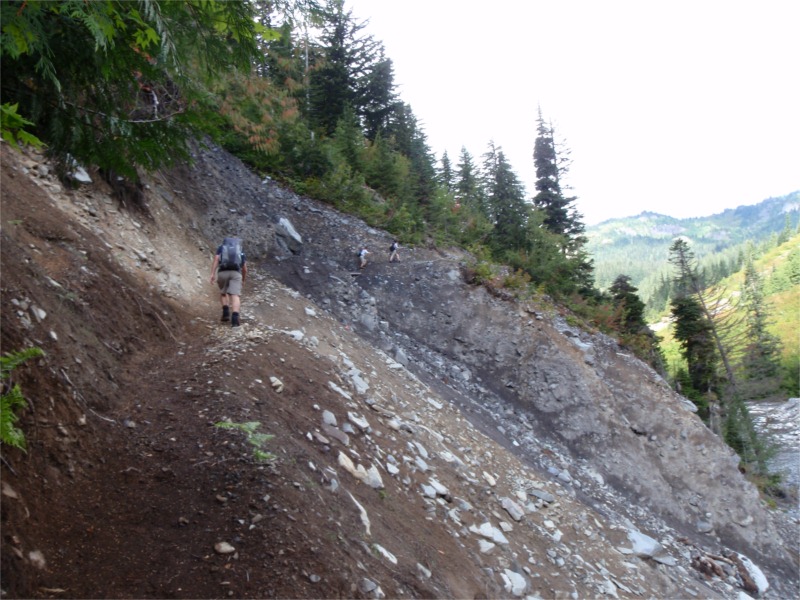 At Myrtle Falls a bridge was out and a big tree had been felled to create a temporary bridge.

We passed by Lake Louise and arrived a Reflection Lakes a little before noon. Today was our resupply day and my brother Craig had graciously agreed to take the afternoon off work to drive out and meet us at Reflection Lake – which I assured him would have stunning photogenic views of the mountain.

At noon, it was very cold, drizzly and windy. The lake was a hopeless display of ripples with nothing but white-cloud on the horizon behind it. 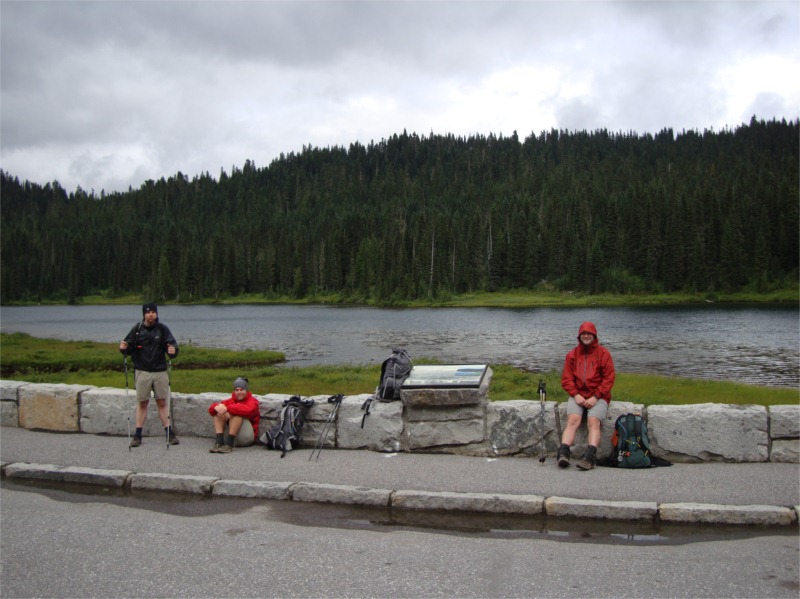 Our plan was to meet Craig between 3pm and 4pm and if he didn't show up by 6pm – assume he's not coming . We had over three hours to kill. We filled up water in a nearby creek and decided that in order to keep warm – a side-trip was in order – after all – this was a very short day. 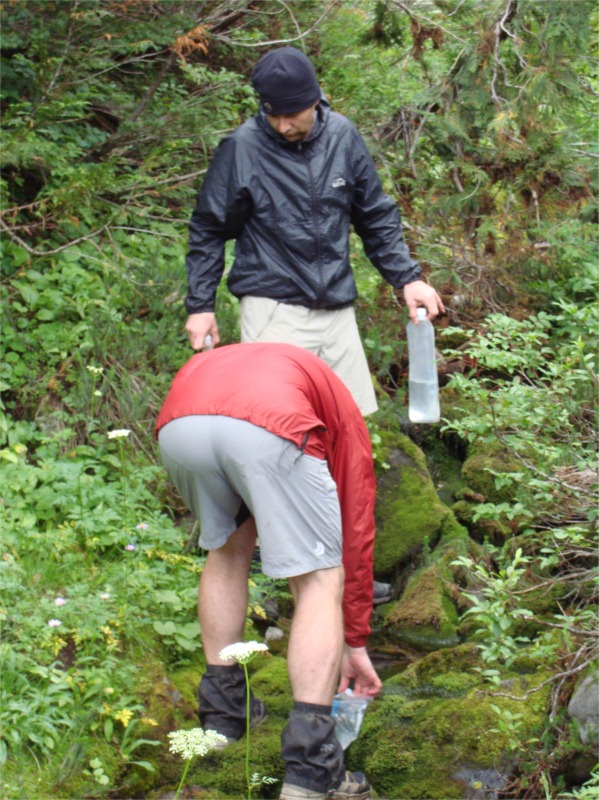 Pinnacle Peak  lay right behind us with a mere 2.6 mi round-trip. At least the climb would keep us warm even if there was nothing to see up top.

The Path to Pinnacle

As we climbed the route to Pinnacle peak, the wind really whipped up. My windproof came on and off and on and off as I struggled to maintain a comfortable temperature on the climb.

After a mile or so, the climb opened up and the clouds lifted a little also. We could see Pikas and Marmots all over the place. 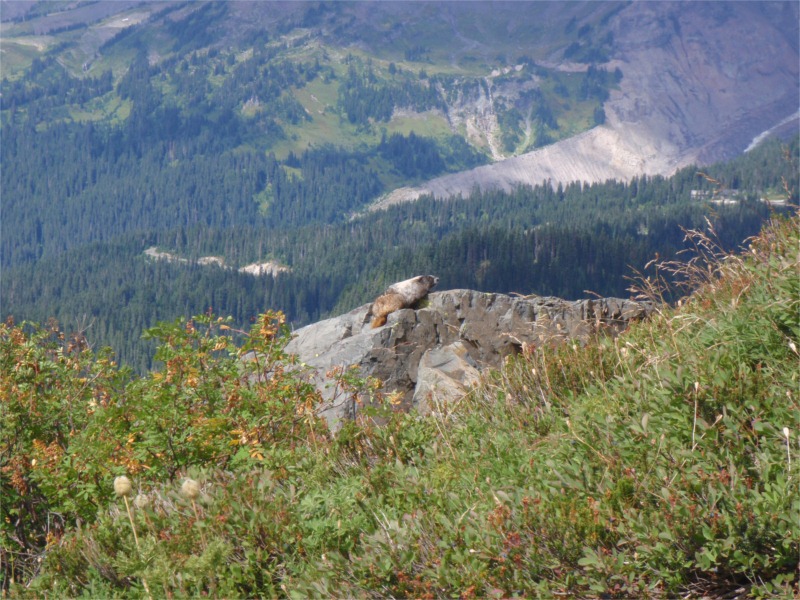 The Pikas were hard at work gathering grass and leaves and piling them up on top and in-between the rocks into little nests. According to tracker Tim – they stash it in piles they can reach between the rocks when the snow falls and blankets the area. 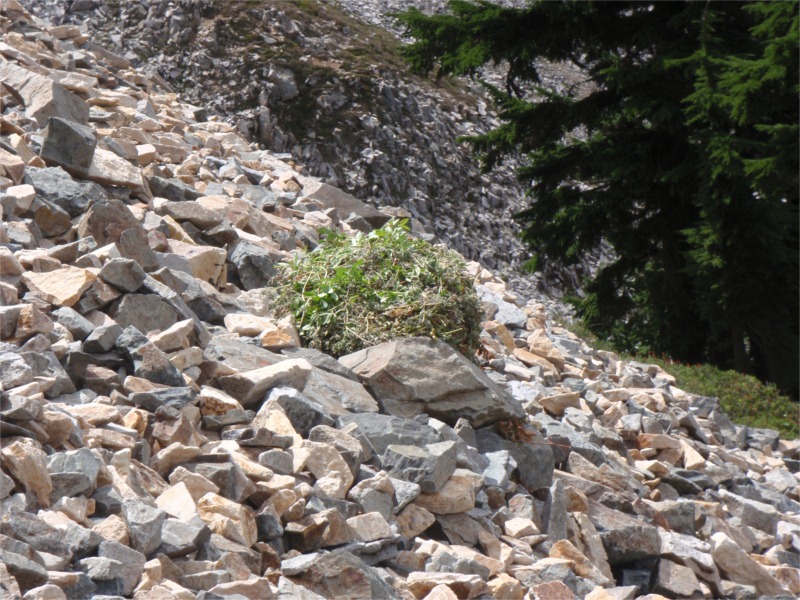 As we reach the top – a sign warned us to tread lightly. 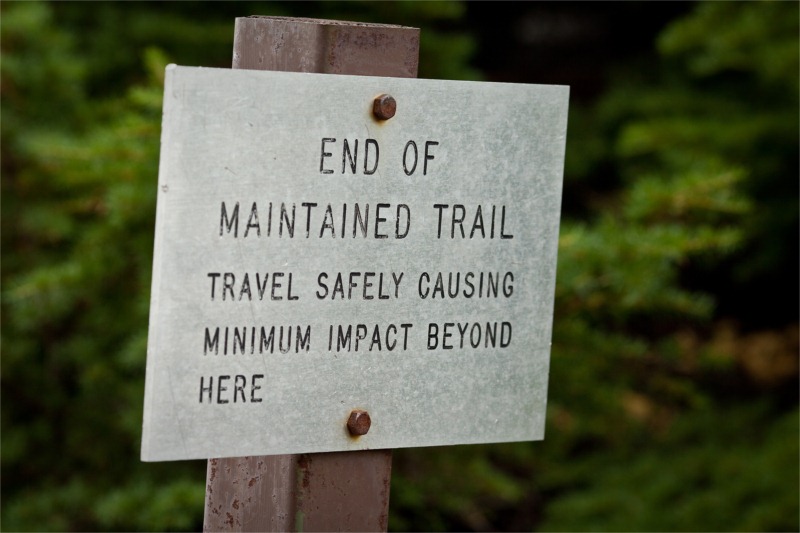 The view off the backside of Pinnacle wasn't bad – the weather was clearing a little. We stopped for a quick lunch break, after which Tim wandered off to snap some photos, while I followed the path along the far ridge.

Dave and Nigel stayed put and got the Builders Tea going again. 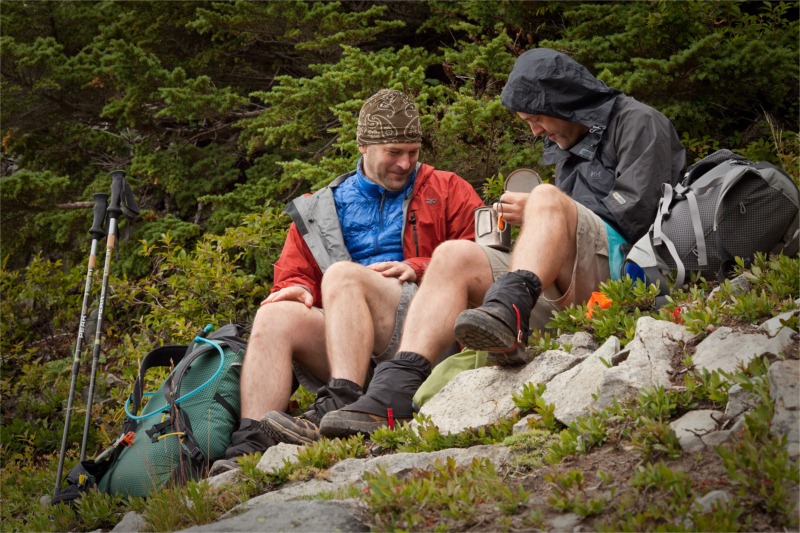 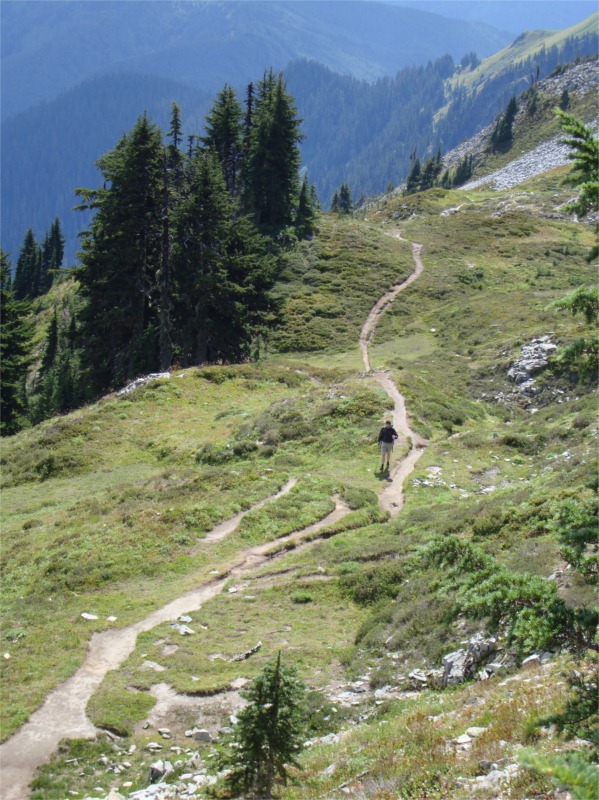 I walked along the ridge for a while alone and then stopped by a grove of trees to peer down in the valley. The clouds were higher on this side and the views were expansive. I stared down into the sides of the valley trying to see if I could see any wildlife movement. Perhaps it was my time to spot a bear in the distance. No bears – but far off I could see black clouds forming with sheets of rain pouring out of them backed by bright sunlight -it was very dramatic. The base of Mt. Adams was visible also – albeit the summit was lost in cloud.

After taking it all in for ten minutes or so, I started walking back towards the others. I could see Dave and Nigel facing me – perched near the crest of a ridge sipping on their freshly brewed tea. Completely oblivious to the situation – behind them was Mt. Rainier in all its glory. The clouds had lifted for a moment and the sky was perfectly blue behind the perfect summit. 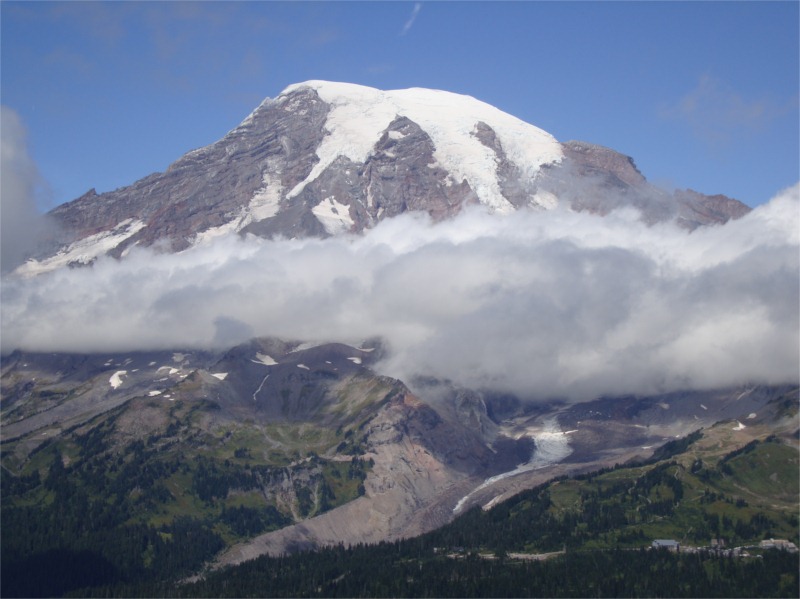 I waved and shouted at Nigel and Dave – in case the clouds came back in an instant and they missed it. At first they just waved back – then they thought I had gone mad as I jumped and yelled and pointed. Eventually they twigged and turned around to see it.

I caught up with them, and they filled a mug for me – and we climbed a few more feet to the ridge line and stood for a while taking in the view.

From here, there are epic views of Paradise and the surrounding valley. 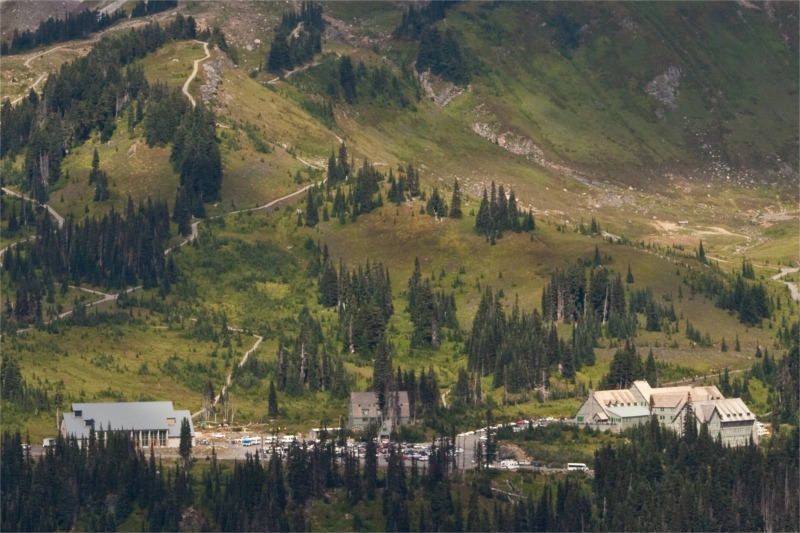 Back to The Car

Time ticked on – and we needed to get down in order to meet up with Craig for our Resupply. We hauled down the trail and arrived back at the trailhead around 2:45.

The trailhead was a different place than when we left it. It was warmer and sunny now – and the air was still. Much improved over the hostile welcome we got earlier. However, there was no Mini (Craigs car) in the parking lot at the trail head – so we walked around the corner to the second parking area – and lo and behold – there was Craig – pulled over reading a book. Hooray! The crops are saved! 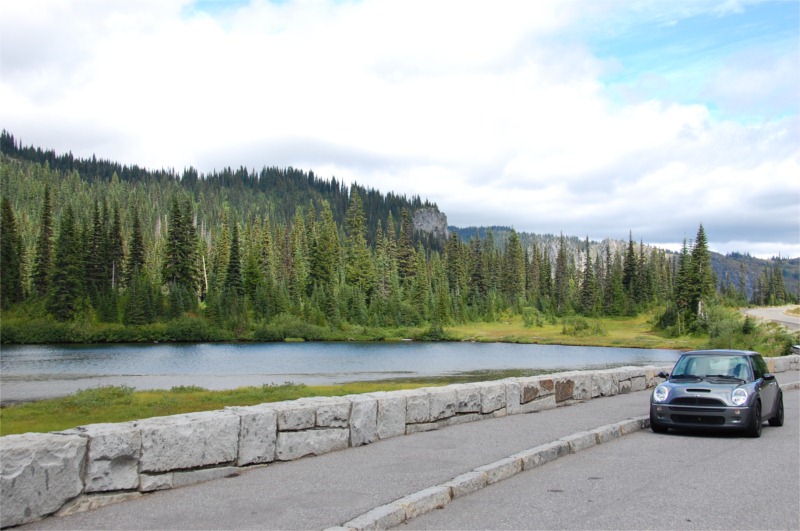 Our hope was that Craig has remembered our re-supply gear and that Melissa had gotten the wider angle lens to Theresa in time. Little did we know all the extras that Craig had in store for us .

We dumped our packs out on the side of the road and triaged old food and trash, lay out our wet tents to dry. It was pretty much the site of a roadside yard sale. 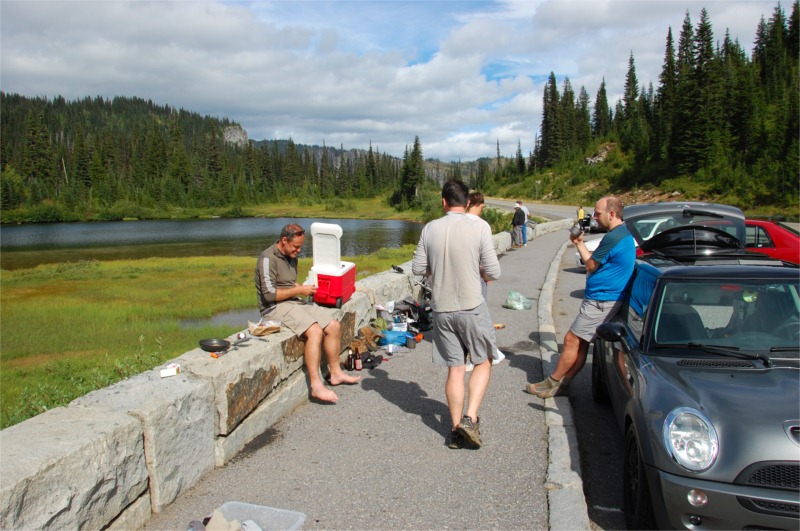 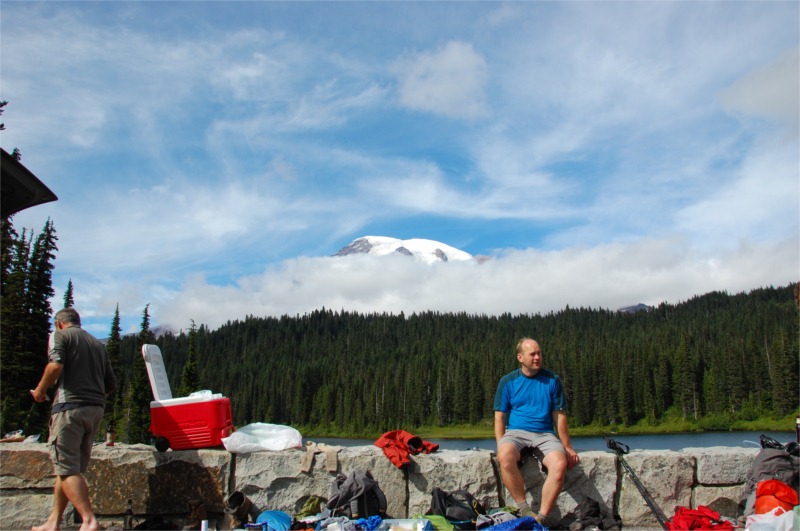 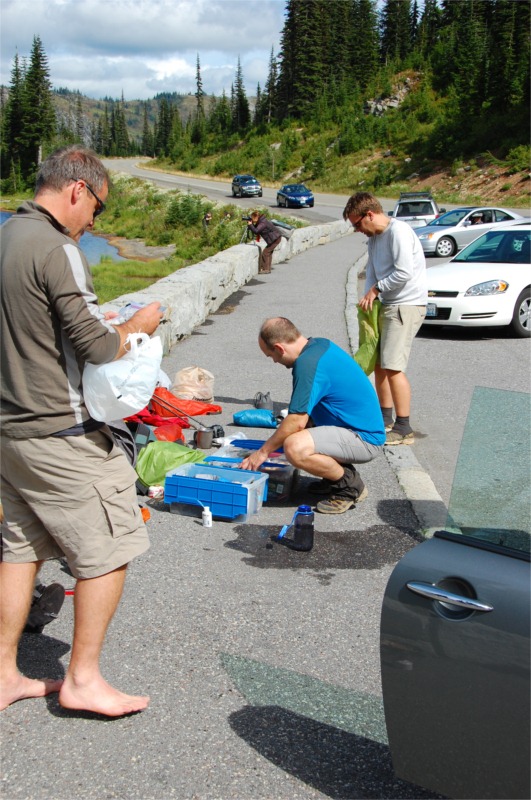 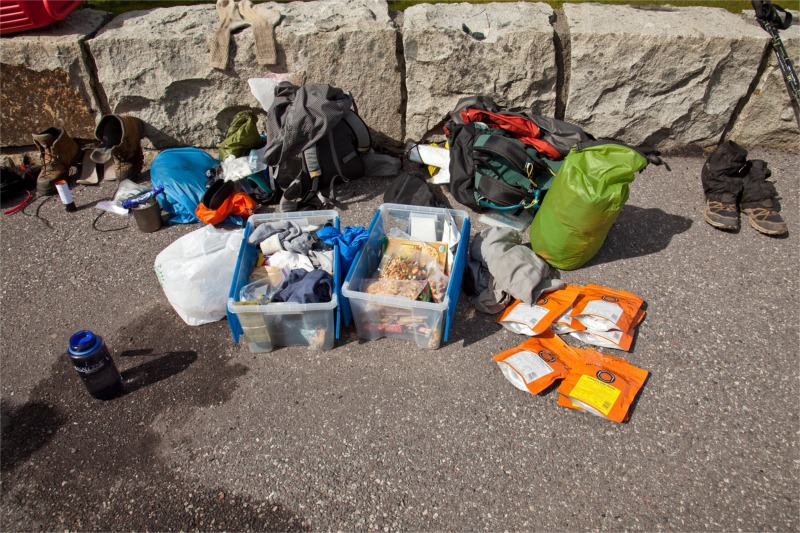 Not only did Craig bring all of our goodie bags (including copious amount of Chicken Tikka Masala for team Dave-Nigel), but he brought real British Bacon a frying pan, HP sauce and English-style white bread from Uwijimaya. 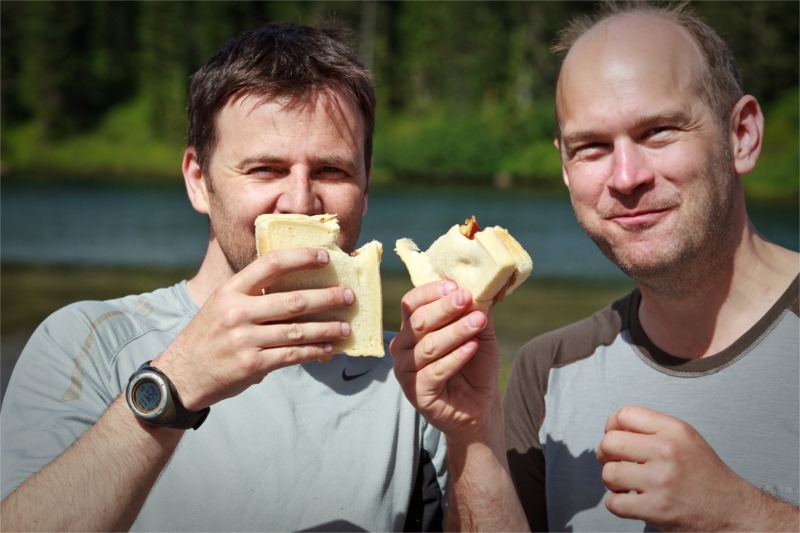 Did I mention that the bacon is hand-cut by a local Seattle pig farmer and hand-smoked. It's the most amazing bacon I've ever eaten to begin with. Top that with five hard days on the trail and Craig fixed us up the best bacon butties that ever were.

But the gifts kept on giving. In his red cooler – Craig had a bunch of beer, a bottle of Bombay, tonic, lemons and ice.

Tomorrow we are heading for Devils Dream – notoriously bad for Mozzies – so of course – I had to drink as much Tonic (Quinine helps cure Malaria) as I could. I hate the taste – so had to disguise it with plenty of Gin ;). Beer in the right hand and a titanium cup of G&T in my left hand 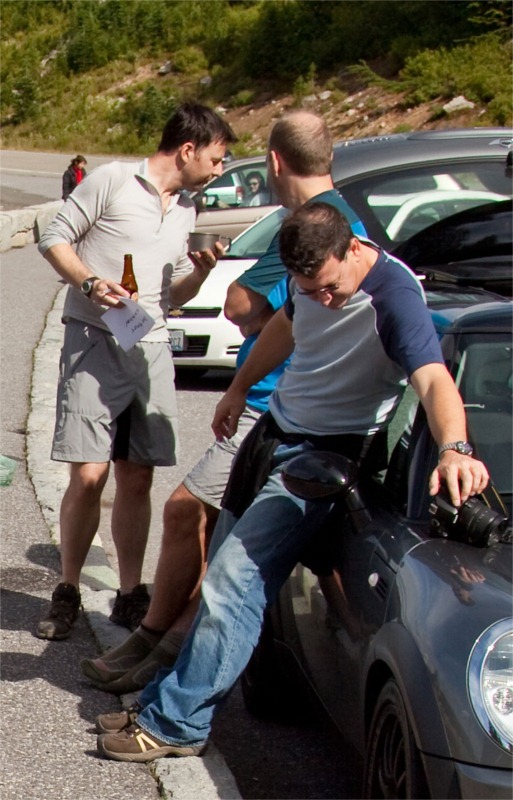 Tim's lens showed up in the resupply – and he excitedly swapped it out and started snapping away in his new found wide-angle freedom.

Also in the resupply were a few little gifts from the Girls back home. Dave got a pile of English sweets (candy bars) and dished them out between us. I think I got a Crunchie and a Caramel. He also got a bottle of whisky to refill his flask.

Theresa sent me a care package, contents of which were:

Eventually it was time to say our goodbyes, re-pack our bags and get back on the trail – we still had a few miles to put away before camp. There were four bottles of beer left in the cooler – so we decided to take them with us for ˜camp beer' later on. Tomorrow we would be crossing Longmire and could ditch the empty bottles there. 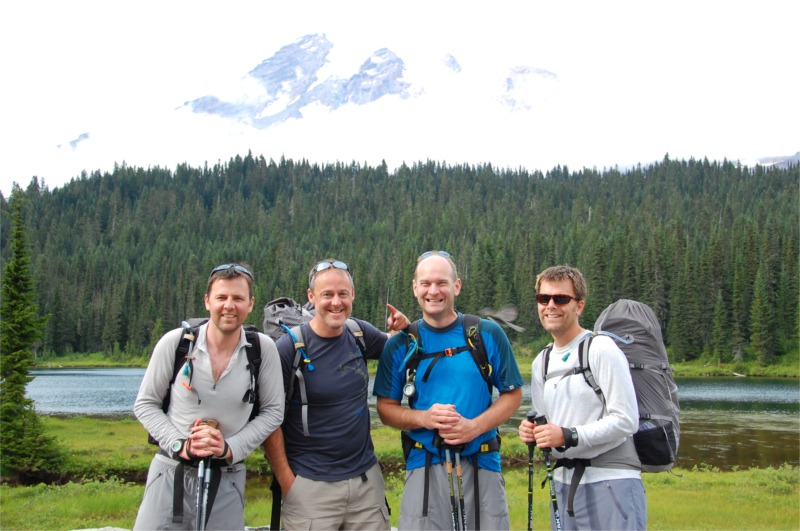 Huge thanks to Craig for taking the time off to come up and resupply us – it was one of the highlights of the trip! 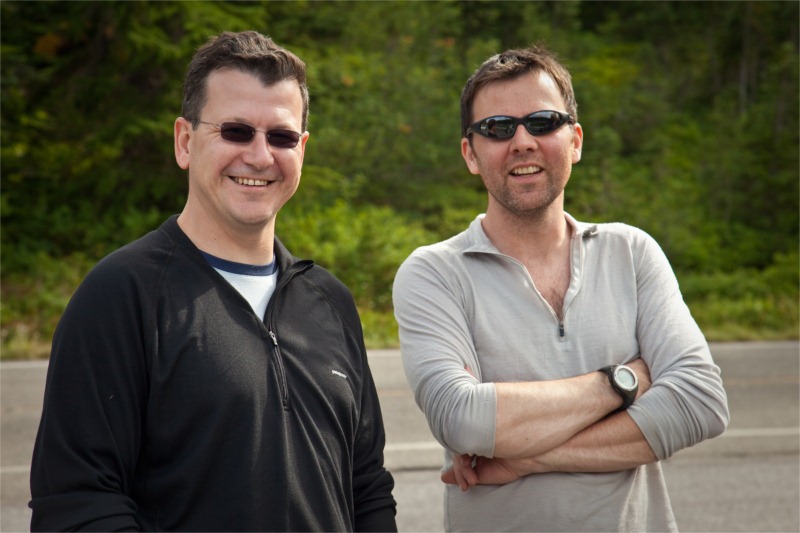 A Blast From The Past

Back on the trail – we weaved in and out of day hikers – descending quickly to camp. Around 4pm we passed Narada Falls – we took the few hundred yard side trip up to see the falls – and on the way back down – as we approached the sign for Wonderland Trail  – I got a weird sense of Deja Vu. Then I remembered why – I had been here before – over fifteen years ago – back in 1993. I recall visiting the falls from the road with Felix and hiking down this far – asking him what the Wonderland Trail was – he told me, and I recall thinking at the time: Who on earth would ever want to backpack for almost a hundred miles – that's just insane.  I chuckled at how times change.

We arrive at camp around 5pm and went down to the river to chill our beers. setup our tents in Site 1. There was a large wasp nest in the base of the tree – but they seemed busy flying in an out and didn't seem to bother us. 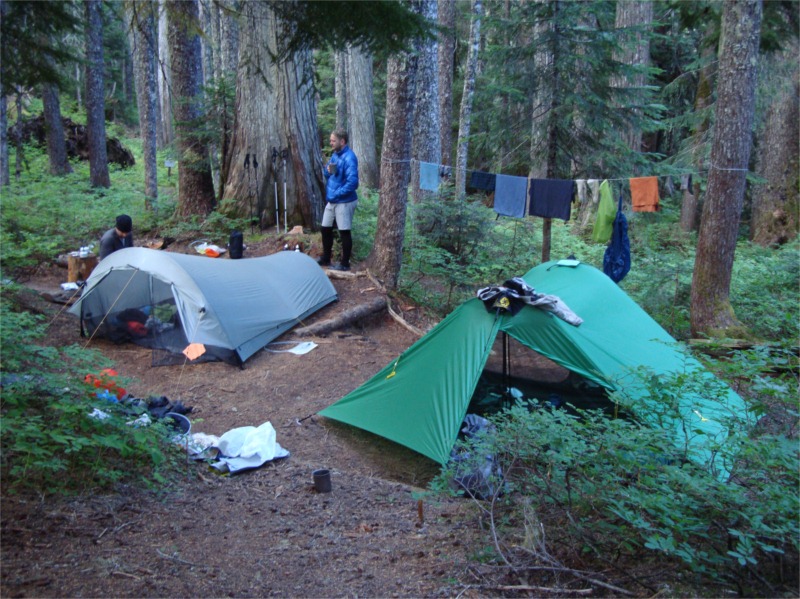 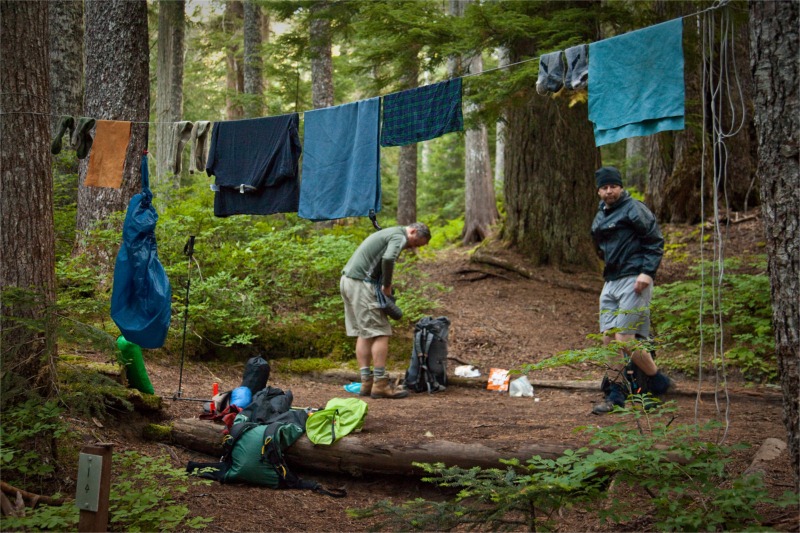 We ate dinner, cleaned up and broke out the beers over a game of spades. Poor old Tim and Nigel got crushed again 🙂 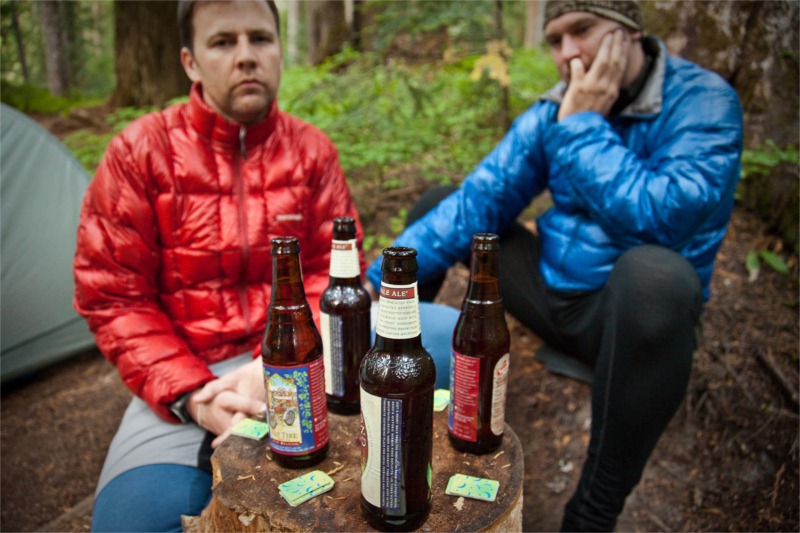